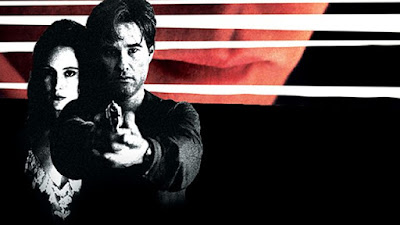 Probably Kurt Russell’s worst ride-along until he saw Ride Along.

Adam: Welcome back to Summer ‘92 Redux, our revisit of the Summer 1992 movie season. This week we’re discussing Unlawful Entry, directed by Jonathan Kaplan (Truck Turner, White Line Fever, The Accused) and starring Kurt Russell, Ray Liotta, and Madeleine Stowe. Unlawful Entry was one of many domestic thrillers in the early 1990s where the concept was the perfect (often suburban) life you built for yourself was compromised and threatened by an outside force you had to defend against. The threat this time is a psychotic police officer (Liotta, soon after his Goodfellas bump) who does everything he can to steal Madeleine Stowe (playing a teacher/wife) from Kurt Russell (playing a club developer/husband). There are some class elements involved with Liotta’s character as he refers to Russell and Stowe as “uptown” and his policeman character being based often in rougher neighborhoods. That might have helped me a bit on this viewing understanding not the Liotta character’s motivation, but the “Why now?” element of it all. That has always been my gripe with Unlawful Entry, which is why would Liotta’s cop snap now and not sooner? He’s clearly nuts. Was he ever normal? The movie isn’t really interested in that. For the most part, he’s the villain and that’s that. At least the class element provides a reason - he wants upward mobility, specifically a life he pictures when he first sees Kurt Russell with Madeleine Stowe.

This was maybe my third viewing of Unlawful Entry over the years, and my memory of it is that it’s the Ray Liotta show. Kurt Russell’s the lead, but Liotta has the flashiest part. As a fan of Liotta, I like seeing him in a showcase role. He’s in his wheelhouse. Russell is great (he’s Kurt Russell) but also a little bit wasted in the husband part. Madeleine Stowe has it even worse because she’s resigned to be a trophy love interest or damsel in distress for much of the movie. Unlawful Entry also has a real mean streak in it that played differently for me on this viewing than it has in the past. I mean, all these ‘90s thrillers had a mean streak in them, whether in their casual conversations (which were often sexist at minimum), but also in their depictions of certain races and neighborhoods. I also felt more uncomfortable this time around seeing a crooked policeman due to recent world events. The movie gets away with it by making Liotta so evil that his profession almost doesn’t matter at a certain point.

What do you think of the movie? Did Kurt Russell have the most 1992 wardrobe of all- time? I felt like I was watching The Last Dance again. 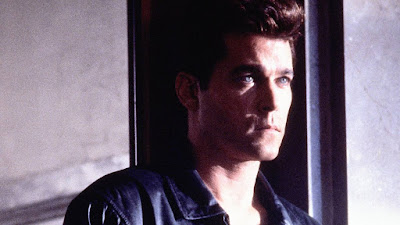 Patrick: Oh boy. This must have been my second viewing of Unlawful Entry and my first in at least 20 years. It is the definition of forgettable studio product, and the fact that it was a summer release is kind of baffling to me. There’s no reason we should be talking about this movie in this series, but here we are. It is the Housesitter of thrillers, except that Housesitter was at least cute and this movie is just unpleasant.

Adam: Maybe the Hawn-Russell household had a Forgettable Project Challenge that year.

Patrick: I have to admit a bias that I’m not a huge fan of the subgenre of Fatal Attraction rip-offs, in which a crazy ________ upends the life of our protagonist. Here, it’s the crazy cop, which, as you already pointed out, made things uncomfortable on this rewatch. I struggle with “innocent man wrongly accused” stories, and these movies are adjacent to that formula -- especially Unlawful Entry, which eventually puts Kurt Russell in prison for crimes he didn’t commit. I’m sure it speaks to my own psychological damage, but I can’t handle that kind of powerlessness in my movies.

Adam: I forgot about that. This movie must have sucked for you. Sorry.

Patrick: I watched this movie wondering why everyone agreed to make it. What could have possibly appealed to Kurt Russell that he would have signed on? Or Madeleine Stowe? Or Jonathan Kaplan, for that matter?? He made Truck Turner, one of my favorite movies. Now he’s making Unlawful Entry? I get why Ray Liotta would agree to be in it. As you said, he gets to do his thing. (The fact that Madeline Stowe’s character is named Karen and he never gets to really yell “KAREN!” feels like a missed opportunity.) Would this have been a better movie if Kurt Russell and Ray Liotta had switched roles? I was thinking about that the whole time I was watching, mostly because I had to think about something other than the movie.

Adam: That might have been interesting. If that happened, I would have been thinking “Liotta should’ve played the psycho” though because he’s immediately uncomfortable on film. Even when he’s a good guy, it feels like he’s going to turn at any moment. I wish there was more with Liotta’s partner played by Roger E. Mosley. Their dynamic is interesting because Mosley clearly knows Liotta’s nuts and he is trying the best he can to keep the lid on it. The movie says they’ve been partners for years. That’s a more interesting (and sensible) movie than the standard thriller we get in Unlawful Entry. 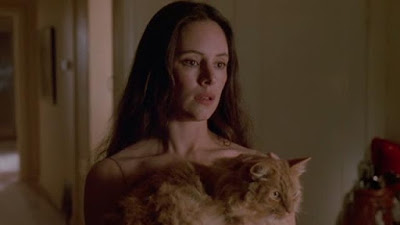 I’m more of a fan of the trashy ‘90s thriller than you are, but this one commits the sin of being too ugly and not fun. The go-to I have for movies in this genre done right is The Hand that Rocks the Cradle. It has its problems (the Ernie Hudson character), but it also knows how to make this nonsense entertaining with Annabella Sciorra’s weird inhaler use, Rebecca De Mornay’s super-committed performance, Matt McCoy’s Matt McCoyness, and Chekov’s white picket fence. Unlawful Entry doesn’t have any of those weird, fun details. It’s too busy objectifying Madeleine Stowe and putting her at risk in basically any way a woman can be at risk. The best I can say is the movie is competently made and acted. It’s not actively bad ever. Perhaps it’s just a lot easier to see through in 2020 than it was in 1992. What a fascinating sub-genre to have had such a platform during a period in cinema history.

It’s insinuated that Liotta chose to ruin Russell’s life and steal Stowe away because Russell can’t protect her (which Liotta decides he can). If Russell did beat up the burglar (from the opening scene that sets everything else in motion) when Liotta found him during the ride-along, would Liotta have not done all of this to Russell? Or was Liotta going to do this all anyway regardless of if Russell beat up the burglar or not?

Patrick: Liotta in this movie is Jack Nicholson in The Shining: we know he’s going to go crazy because he pretty much starts out that way. It’s just a matter of when. I think he was always going to do this to Russell, though I wish it was for more interesting reasons than that he covets Russell’s wife. You mentioned there are hints at a class differential in the movie (though not necessarily, because Russell is hanging on by a thread financially for the entire running time); having Liotta want Russell’s station in life, or his middle-class comfort and stability, wouldn’t be original but would at least be more interesting.

You’re totally right that the movie is never actively bad (aside from the racism and misogyny). It’s very competently made. That makes it all the more frustrating. I can feel Jonathan Kaplan wanting to lean into the trashiness of the whole thing because his roots are in exploitation, but there’s such a thick commercial studio gloss over the whole thing that it both dulls the edges and becomes more insidious. It presents ugliness not as ugliness, but as normalcy. It should be a little dangerous, but it can’t stop being a conventional studio movie. And I’m a hypocrite here, because I’m always lamenting the disappearance of the mid-budget studio movie targeted towards adults. That’s literally exactly what Unlawful Entry is, and it was given a high-profile summer release to boot. I’m being completely ungrateful in my frustration with this movie. 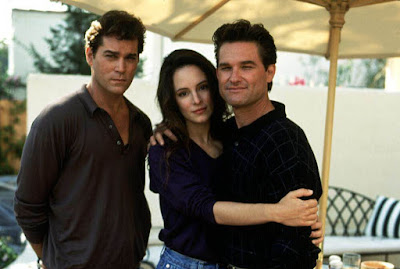 Adam: You don’t have to be grateful for a blah movie just because it’s of an endangered species. Also re-released this week was my first favorite movie when I was a kid - Pinocchio. I remember being very concerned the first show that Friday afternoon in 1992 was going to sell out. When I dragged my family to the theater, we were one of about 10 people there. I said we weren’t sitting close enough so the rest of my family was like “If you want to sit in the front row go ahead, we’ll be back here.” Monstro up-close was tremendous. That whale got me ready for Jaws. I rewatched Pinocchio again last week. Man, I love that movie. It’s so great. I think I always responded to that fact that he too screwed up all the time despite his best intentions. What are some of your favorite Disney animated films? I don’t think we’ve ever talked about that before.

Patrick: I like Pinocchio but I can’t handle that donkey transformation sequence. I’m a real wuss of a viewer is what we’re learning here today. My favorite of the classic Disney’s is either Peter Pan (though maybe I’m just thinking of the ride at Disneyworld) or Sleeping Beauty, because I’m a sucker for dat widescreen. Of the modern era (era), it’s probably Beauty and the Beast. Even with kids, I don’t revisit Disney movies that often. I’ve seen Frozen and The Little Mermaid 500 times each, but the rest only a handful of times at best.

Adam: I’ve been rewatching a lot on Disney Plus. It’s been enjoyable. We’ll be back next week to discuss Reginald Hudlin’s Boomerang, starring Eddie Murphy, Robin Givens, and Halle Berry. I’ve been wanting to rewatch this one for a while so I’m excited. See you next week!
Posted by Patrick Bromley at 5:00 AM