Two for One: THE PROPOSITION & DEAD MEN DON'T COUNT 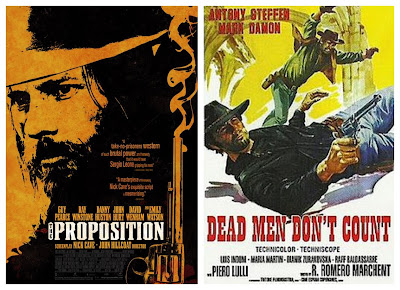 “I will civilize this land.” - Captain Stanley

Admittedly, my fandom for Westerns is only about a year old. Thanks to the Pure Cinema Podcast, though, and their three-part series on Westerns (including a conversation with Joe Dante) I really dug in. In the few dozen Westerns I have seen, I've noticed something: early American Westerns aren't that exploitative. The old John Wayne films like Stagecoach and Red River; Gary Cooper in High Noon and Man of the West; or James Stewart in Bend of the River and The Man From Laramie, while great films, don't feel exploitative to me. They're more of a history lesson. It's not until the old American West is put in the hands of the Italians, Spanish, and Aussies that it enters into exploitation territory. These directors from foreign lands look at America and its history and say, “My god. The United States was built by the greed of the powerful and the slaughter of the innocent.” And it's true.

We kick off this double with a modern Aussie Western. The Proposition (2005) stars the indelible Ray Winstone as Captain Stanley, a British officer charged with trying to settle land in the Australian Outback. After apprehending two outlaw brothers, he offers one (Guy Pearce) a deal to bring in his other brother to be hanged. While not set in America, the film still explores the ideas of greed, power, and racism. Now, I don't know anything about Australian history, but I assume aboriginal people were killed off or enslaved in order for the white man to claim the land as his own. Sounds familiar. 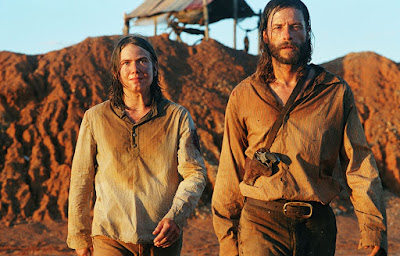 The second feature of this double comes from Italy with a film called Dead Men Don't Count. American actor Mark Damon teams with Italian actor Anthony Steffen as a pair of bounty hunters who end up having to defend a town from the railroad moving in. A gang that includes powerful leaders of the town are killing off the land owners in order to sell the deeds to the railroad. It's no Once Upon a Time in the West, but it's worthy of your time. Damon and Steffen play a great comic duo, surrounded by some of the more memorable townspeople I've seen in a Spaghetti Western. And like most of the Westerns from the '50s and '60s, you'll see some excellent stunt work.

Both of these films felt awfully relevant as the world, and America in particular, is currently going through a difficult yet necessary time pertaining to basic human rights. The rich and powerful are exploiting those deemed less-than. In The Proposition, the aboriginal people are used as servants and looked down upon by the white man. In one particular instance, an officer is calling out for his servant and a black outlaw comes out and says, “You got the wrong fuckin' black man,” in a seemingly cathartic beat. In Dead Men, corruption flows heavily through the rich and powerful in town. From the sheriff to the richest man in town, these men (always men) are concerned with only one thing: more money and more power. Like the quote from the top of this essay from The Proposition, in both films we have white men asserting their dominance to take what doesn't belong to them. By any means necessary.

Nick Cave (yes, that Nick Cave) wrote the screenplay, and knowing some of his song lyrics, the script is very Nick Cave. While I can't say there's a single likable main (or secondary, even) character in The Proposition, Winstone's Captain Stanley and Pearce's Charlie Burns both skirt the line between decent human being and evil piece of shit. They're both faced with an existential crisis: “I find myself in an awful situation, but I want to do the right thing.” The Proposition is quite bloody (the opening scene is reminiscent of The Devil's Rejects, you'll see a head explode, and there's a brutal lashing scene), but it's also quite heavy and ends on a beautiful ambiguous note. 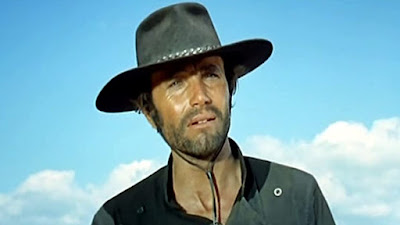 Besides Winstone and an unrecognizable Pearce, you also have one of the greatest living character actors, Danny Huston, playing an unhinged and terrifying Manson-esque character. Human porcelain doll Emily Watson plays Winstone's wife as someone in a similar situation as her husband: she wants the men who killed her friend to pay but she can't stomach to see the punishment they're given. Not surprisingly, the only truly likable characters in The Proposition are the aboriginal people.

Dead Men is much lighter in tone, which is why I suggest playing it second. There are some truly funny moments, but the overall message still rings true: men will do anything to gain more power. Men will lie, cheat, steal, and kill if they think it will give them the upper hand. Some might say this isn't a very memorable film, but it's one that has stuck with me since the first time I saw it. Over time a lot of these Spaghetti Westerns may start to blend together, because, let's be honest, it's usually the same storyline over and over. But Steffen and Damon make a really great team here, which is something you don't often get in American Westerns.
Posted by Patrick Bromley at 5:00 AM