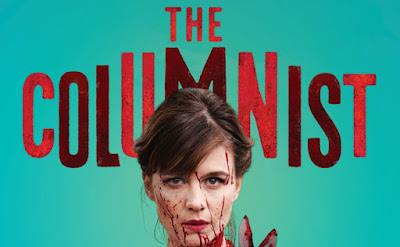 The horror of being a woman on the internet.

Ivo van Aart's new black comedy The Columnist, playing as part of Fantasia Fest, is like an updated version of the 1973 Vincent Price movie Theater of Blood. In that film, Price plays a hammy actor who takes revenge on his critics with a series of elaborate murders, each committed in the style of a different Shakespearean play. It's an incredibly entertaining takedown not just of the pomposity of those who make a living criticizing, but also of the fragility of the actor's ego. The Columnist has other targets in its sights -- namely internet trolls who spend their days attacking women on social media. 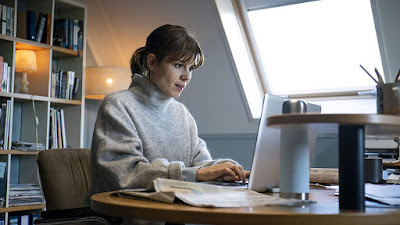 Katja Herbers plays Femke Boot, a celebrated newspaper columnist who's beginning work on her very first book. Like a lot of writers, she makes the mistake of reading comments about her on Facebook and Twitter, and what she finds is filled with disgusting hate and death threats. Fed up with the personal attacks, Femke decides to begin visiting these trolls and exacting her revenge.

Remember that scene at the end of Jay and Silent Bob Strike Back where the two title characters go around finding all of the people who insulted them on the internet and punch them in the balls? The Columnist is pretty much that, only played a bit more straight and a lot more violent. It seems like there is such a good idea for a movie here, such a necessary howl of rage towards the current state of online discourse, that surely seeing someone finally snap and hold the trolls accountable -- albeit at the end of a knife -- would have to be satisfying, no? The answer is "sort of." This is a movie that's very well directed and very well acted (particularly by Herbers in the lead) and so of the moment that I have to give it a ton of credit even if it didn't come together all the way for me. On paper, it can't miss. In practice, it's a different story. 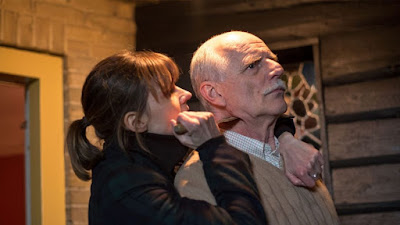 There's an element of satisfactory bloodlust in the story, yes, one that forces us to engage with our own reactions to online bullying and acknowledge that while it's vicariously entertaining, yeah, it's probably too far. That's the point, of course. But unlike Vincent Price in Theater of Blood, Femke isn't really a target of the joke -- not when her plight is the kind of very real harassment and hatred experienced by women online everywhere. I'm being too literal about it, I know, but the filmmakers don't heighten or exaggerate anything enough -- save for her bloody payback, which lacks much invention -- for the movie to become a true black comedy. It wants to be, but winds up closer to something like Falling Down. The disproportionate response becomes the point rather than the very real problem it starts out exploring. 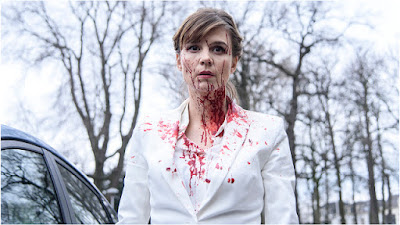 It's also on the repetitive side, dramatically speaking. Once Femke begins tracking down and taking out trolls, we get sequence after sequence of the same thing. There's a little suspense in her attempts to hide what she's doing from her daughter and boyfriend, a horror author who goes by the name of Steven Death (Bram van der Kelen). Mostly, though, it takes one idea and acts it out again and again, never really becoming more thoughtful or building on what it wants to say. There's a good deal of catharsis in The Columnist for a whole lot of its audience, I'm sure, and that shouldn't go unappreciated. It just left me a little cold.
Posted by Patrick Bromley at 5:00 AM

Email ThisBlogThis!Share to TwitterShare to FacebookShare to Pinterest
Labels: fantasia fest 2020, the columnist