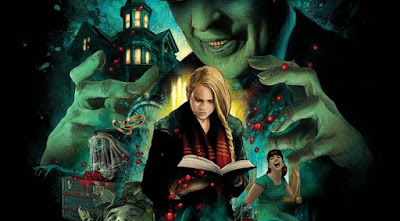 A horror anthology that gets it right.

The anthology is like the pizza of the horror genre, in that even when the makers get one wrong, I'm still happy to have it. These movies have an advantage other horror movies don't: they're able to reset every couple of minutes, offering a new segment and a new opportunity to win us over. We tend to hold them to different standards, too, in that they're so often judged by their best segment and not as the sum total of their parts. A horror anthology just has to give us one banger -- and hopefully no real stinkers -- and we'll be a fan forever. 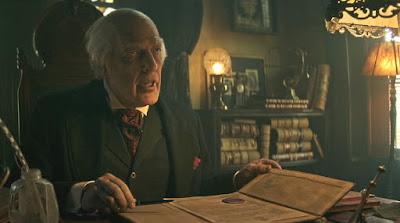 The Mortuary Collection, playing this week as part of Fantasia Fest, has no stinkers in it, but it doesn't have a real banger, either -- no "The Raft" or "Lover's Vow." That's ok, though, because it all still works and is unusually consistent for an anthology. Writer/director Ryan Spindell has clearly studied decades' worth of anthologies, from Dead of Night to Amicus to Trick 'r Treat, and has crafted three tales (well, four, sort of, plus a wraparound) of twisted morality and nastiness right out of EC Comics. It isn't just a good horror anthology; it's a love letter to horror anthologies.

Clancy Brown stars as the excellently-named Montgomery Dark, a mortician interviewing a prospect (Caitlin Custer) for a possible job. She wants to hear stories about the bodies at the funeral home, so Mr. Dark begins to spin tales for her. The first and most succinct finds a young woman attacked by something lurking behind the bathroom mirror. In the second, a rapey fratboy (Jacob Elordi of The Kissing Booth) has the tables turned on him in unexpected ways. The third story centers around a man (Barak Hardley, Bounty Killer) with a terminally ill wife who's going to make good on his wedding vows one way or another. Finally, it's the girls turn to tell Mr. Dark a story, and she tells the story of a babysitting job gone horribly wrong when a killer pays a visit to the house. 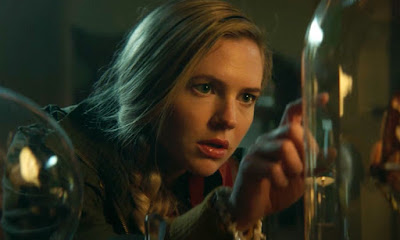 The movie gets off to a somewhat bumpy start with the bathroom story, which is both too short and lacks any real kind of dramatic arc, but then Spindell calls attention to exactly this fact by having the young girl Sam express her own disappointment in those things. I get it, Spindell says. I know what you're here for. The rest of the segments take their time, introducing characters who range from flawed to downright monstrous, then more often than not deliver them a grisly comeuppance. The first real story -- the one about the frat douche getting his just desserts (in a year that has raised the bar for onscreen dick trauma thanks to movies like Porno and Yummy, this one has them both beat) -- leans much more horror comedy than the ones that follow, giving The Mortuary Collection a strong and compelling arc; it gets more serious and more intense as it goes. The last segment is the strongest, demonstrating that Spindell knows the importance of finishing big. There's a shot involving a TV that's worth the price of admission alone.

I love the production design, too, which is never period-specific but has an aesthetic and somewhat desaturated color palette in keeping with the late '60s and '70s. It gives the film an Amicus vibe for which I'm a total sucker, but combines that with '80s Amblin and '90s horror. The wraparound alone has references to both Tales from the Hood and Tales from the Darkside: The Movie, two of the best anthologies to come out of that decade. Clancy Brown is perfect at the center of the film, his deep bass practically made for telling spooky stories, his eyelids heavy under old age prosthetics, his backstory appropriately mysterious. There are touches throughout the film that get it just right, that tell us that Spindell is a tried and true horror fan. He's One of Us, and his movie proves it. 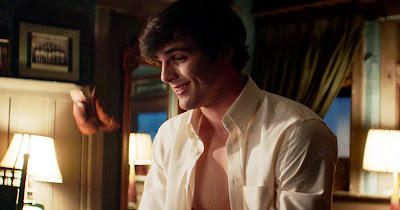 The Mortuary Collection feels both old-fashioned and contemporary, a celebration of horror past with its head in the present. It's a movie with a good vibe, which is hard to quantify and put into words but the kind of thing you know when you feel it. There are a lot of horror anthologies, but there aren't necessarily a lot of good horror anthologies. Most of the time, they're inconsistent at best. The Mortuary Collection is one of the good ones.
Posted by Patrick Bromley at 12:00 PM