Riske Business: Why You Should Watch Tales from the Darkside: The Movie This Month

A movie I love and hope others discover this Scary Movie Month.

It’s been well-documented on the site and the podcast that I am an aficionado of horror anthologies. It is my favorite subgenre of horror. I love their malleability. Some anthologies can be socially relevant (Tales from the Hood) or terrifying (Three… Extremes) but most are just plain fun. Tales from the Darkside: The Movie falls in this third category. It’s a blast. Directed by Creepshow alumnus John Harrison and featuring much of the same crew and creative team of that stellar 1982 anthology, Tales from the Darkside: The Movie is (according to some) the unofficial Creepshow 3. After the underwhelming box office performance of Creepshow 2, the brand name was in decline, so the powers-that-be decided to use the brand name of Tales from the Darkside (which was a popular anthology series in the 1980s) for the project. I’ve never seen an episode of the TFTD series so I can’t say if the film is a good representation of it, but as a spiritual sequel to Creepshow it falls in line nicely. 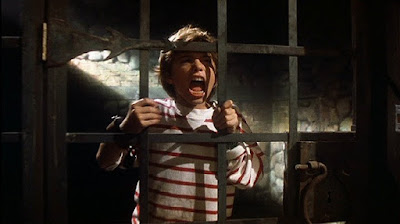 Tales from the Darkside: The Movie was a big deal for me as a kid in the early ‘90s. It was a landmark to my burgeoning horror fandom and a movie I rented many, many times. As an adult, I think my love of the movie is partly predicated on that nostalgia, but not entirely. One aspect of Tales from the Darkside: The Movie that I love didn’t even occur to me until this past weekend. I was watching The Dead Zone for the first time (I liked it!) and it dawned on me that Paramount in the ‘80s and early ‘90s had this particular aesthetic that feels like home. Much of it has to do with the photography. It’s like the “Paramount cameras” had a lot of history in their nooks and crannies and gave off this warm, flat imagery that felt like you were opening up a musty book. I’ve said it before in reference to Stephen King adaptations, but this look (for me) is like being wrapped in a comfy horror blanket. Tales from the Darkside: The Movie is the comfiest one.

The wrap-around to Tales from the Darkside: The Movie is just okay. It features a young boy (Matthew Lawrence) being held prisoner by a witch (Deborah Harry) and to delay his execution he tells her stories from a massive book entitled (appropriately) Tales from the Darkside. It’s fun in a Grimms’ Fairy Tales way but also slight and pretty brief. The film doesn’t have a great host like some other anthologies have had. 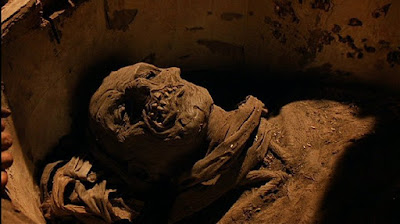 The first story, “Lot 249,” is a revenge tale featuring a resurrected mummy. Some of the treats of this entry include a star-studded cast in some of their earliest roles, including Steve Buscemi, Julianne Moore (in her feature debut) and the always awesome Christian Slater, who does a neat balancing act here giving us the full Slater – being sympathetic (he has some early dialogue about “rotting flowers” that recalls his later “classic” Bed of Roses; this is a reference that probably only does something for me) and going crazy with his trademark Jack Nicholson impression, a la Heathers. I think that’s my favorite part of “Lot 24,9” which is that your audience sympathy keeps continuously changing. Everybody is a shit but then a character will get a comeuppance and all of a sudden you’re like “well that was maybe too harsh, I hope so and so exacts THEIR revenge now.” But “Lot 249” is just a taste of what’s to come. 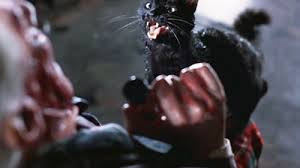 The second segment, “Cat from Hell,” is noteworthy mostly for an amazing gore gag near its finale. The story tells the tale of a wealthy pharmaceutical magnate (the invaluable William Hickey) who is being terrorized by a cat. Desperate for some peace, the big wig hires a hit man (David Johansen) to off the evil kitty. He gets more than he bargained for. This is probably the funniest segment of the movie, largely because the premise is so ridiculous, but when that moment happens that I described earlier it is gross on the level of the roach segment in the original Creepshow. 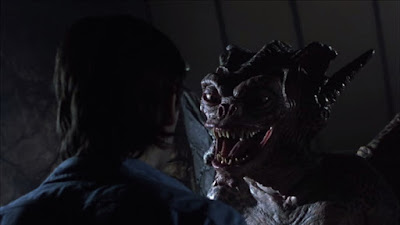 The final segment, “Lover’s Vow,” is by far my favorite story and the one that elevates the film into an all-timer for me. Based on Japanese folklore, the segment tells the story of a gargoyle who murders a man and strikes a bargain with the murder’s witness (a struggling artist played by James Remar) to spare his life in exchange for his eternal silence about what he saw. Soon thereafter, Remar meets a woman played by Rae Dawn Chong and prospers. Will he end up telling her about the gargoyle? Have you ever seen a horror movie? This segment is special for a couple of reasons – it’s emotionally very rich with well-developed stakes and relationships for its characters and it has show-stopping creature and make-up effects (pre-CGI) that still look amazing to this day. I quote and joke about this segment at least a handful of times each year with friends. Even though Tales from the Darkside: The Movie is not my favorite anthology of all-time (it would be top five, though), “Lover’s Vow” is my favorite anthology segment ever.

Earlier this week our friend E.S.A.D.D. said in the Weekend Open Thread that F This Movie! is a place for people to discover movies above all else. With that sentiment in mind, I hope those of you looking for a cool, fun, crowd-pleasing horror party-movie give Tales from the Darkside: The Movie a shot this October. Happy Scary Movie Month everybody!