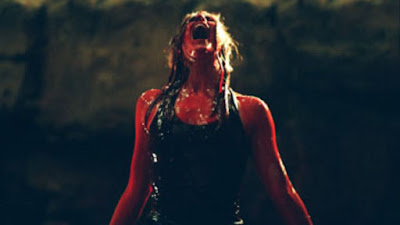 I’ll be blunt: I don’t think I can talk about this spoiler free, so if you haven’t seen The Descent just stop reading right now and do yourself a favor and go watch it. I recommend the director’s cut.

The Descent may be one of my favorite horror movies of all time. It does two things that I am a complete sucker for in movies, the first being a movie that seems to be going one way, and then halfway through completely changes itself and becomes more interesting in the process. The best example I can give of this is Predator (a movie that The Descent parallels a lot), where the movie starts as a rescue mission and war movie but drastically changes in the middle. The second thing I’m a sucker for is flipping movie tropes. The best example I can give of this was Jeepers Creepers, which makes the relationship of the main characters brother and sister, eliminating romance. The Descent has an ensemble cast made of all women, but really concentrates on the relationship between Juno (Natalie Mendoza) and Sarah (Shauna Macdonald), two characters who are (or were) close friends but have an unspoken tension between the two of them. 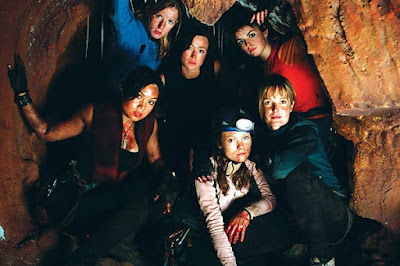 I’m going to say this again: I’m about to spoil the movie something fierce, so if you haven’t seen it, stop reading and go see the movie. Within the first few minutes of the movie we are introduced to Sarah, Juno, Sarah’s husband, and her daughter. Sarah is happy. She has a conversation with her daughter about planning her birthday party, and as she begins talking to her husband, he gets distracted and a car accident kills him and her daughter. We don’t pick up the story again until later -- much later -- for a spelunking exhibition planned by Juno with Sarah and a few other women. It’s this first change in being reintroduced to Sarah where Shauna Macdonald really starts to do something great. She says so much without ever putting it into words. She is visibly a different person who has clearly gone through some sort of trauma; not only that, but she also gives off this vibe of someone who really just wanted to stay home but is out because of some sense of obligation. The best part is that she doesn’t ever let up. She always manages to keep this same awkward feeling but continually adds on to this base with additional levels of emotion.

There is this underlying current of mistrust and suspicion in The Descent that doesn’t just come across through Shauna Macdonald, but also through the performance of Natalie Mendoza as well as some great directing by Neil Marshall. Sarah suspects Juno of having an affair with her husband. It’s never spoken, it’s never brought up directly, but the tension between the two characters is ever present throughout the entire movie. Eventually the women all find themselves trapped in the cave after a collapse of one of the shafts leading out, and the plot unravels as the women try to find a way out. Shauna Macdonald provides that key role as the movie’s anchor as things start to get crazy and crazier, and though we start moving between the ensemble cast, we are always brought back to Sarah. This is still her story despite the craziness. The movie is incredibly claustrophobic, giving credit to Neil Marshall, but also to Shauna Macdonald who, as we recall, does not want to be there. Shauna becomes increasingly more agitated and really mimics the audience reaction. It’s a rollercoaster we want to get off, and as Sarah gets more upset, we get more upset. At some point we just want to leave but can’t. Neither can Sarah. 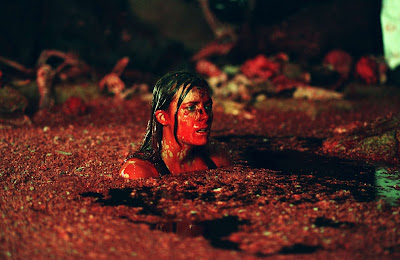 About halfway through The Descent it changes. The stakes are raised and Sarah gets more paranoid, suspicious and manic. Sarah see’s what she calls a “Man” in the cave. No one in the group really believes her, which causes more anxiety and removes her further from the group and feeling more isolated. She gets less involved in the group, and as an audience we almost forget about Sarah until her suspicions about “others” in the cave are confirmed. Once the creatures are revealed, things get nuts and, with them, so does Sarah. In what may be the defining moment in the movie, Sarah falls into a pool of blood and emerges a different person. Her expressions are different and cold, once again going unspoken and resting on the shoulders of a silent performance filled with emotion from Shauna Macdonald. We’ve now watched Sarah as a character go from a happy, loving mother and wife in the beginning of the movie to an emotionless, shell of a person by the end. This culminates in Sarah’s eventual killing of Juno. After killing off a series of creatures, Juno and Sarah stand face to face where a cold and suspicious Sarah kills her friend. It’s never really said why, and as a viewer we are left with questions as to whether the killing was in cold blood or justified.

It’s at this point that I cannot recommend the director’s cut enough. While the theatrical release is still a very good movie, I feel like it short changes the end of a great movie and great performances with a jump scare. The theatrical release cuts in moments of what was going to be her daughter’s birthday party, and builds to the moment where we are unclear of Sarah’s fate as she sits on a rock, surrounded by creatures, visualizing her daughter’s birthday. I haven’t seen much other work from Shauna MacDonald so I don’t know how much credit is to be given to Neil Marshall, but what is on the screen remains one of my favorite performances in one of my favorite movies of all time. Shauna MacDonald takes the audience on an odd character arc not often seen in movies, from being highly likable and relatable to going crazy, from hero to monster in under 100 minutes.