To fully capture the twelve-year-old kid, “Gosh-Darn, Pop!” quality of the film I’m going to discuss today, I propose a combined “read-along” and “sing-along!” At various points in this screed, my prose will be interrupted by an exhortation to sing along. It will look something like this:

That’s your cue to SING the famous Queen title song (I KNOW YOU KNOW THE MELODY!) of this terrific 1980 Fantasy/Sci-Fi/Comic Strip film that Arrow Video has just released in 4K! Hooray! Who’s with me?

Flash Gordon was produced by Dino (“No one cry when a-Jaws die. When my Kong die, everybody gonna cry!”) DeLaurentis in the wake of Star Wars’s incredible success. This is in itself ironic because before making Star Wars, George Lucas wanted to make a Flash Gordon film and tried to purchase the rights from Dino DeLaurentis. Lucas couldn’t afford them; he made Star Wars instead. DeLaurentis thought a big, international production of Flash Gordon could be a money-maker. He hired Lorenzo Semple Jr. to write the script and Nicholas Roeg to direct. Artistic differences saw Roeg leaving the project after over a year of pre-production; Mike Hodges stepped in to direct. DeLaurentis also hired Danilo Donati to design the film’s sets and costumes, which accounts for the film’s One-of-a-Kind/Sci-fi Comic/Giallo Film/Fashion Show on Acid look.

MUSIC SOARS: Savior of the universe!

THE PLOT IN BRIEF: Ming the Merciless casts his jaded attention to Earth, and decides to “play with it for a while” because “it amuses him.” NY Jets Quarterback Flash Gordon and travel agent Dale Arden board a plane for home, but because of Ming’s “hot hail,” their plane crash lands in the laboratory of Dr. Hans Zarkov, who has been predicting an invasion of Earth. Zarkov tricks the two into boarding his spaceship, and the intrepid trio fly to Mongo. Will Flash save the Earth? Will Zarkov be proved right? Will Dale finally find a man worthy of her “response?”

The new Arrow Video 4K Blu-ray is astounding. This was a bright, colorful, IN YOUR FACE film to begin with (It’s only 40 years old!) and the 4K presentation here shows off its strengths. I can think of two “comic strip” films that went with rich, primary colors to ape their source material: Flash Gordon and Warren Beatty’s Dick Tracy. Though I love Tracy because it’s a lot of fun, its color palate tends to give me a headache. Flash Gordon’s colors are true to their source: vivid, and vibrant, but will not send you scurrying to the medicine cabinet for some aspirin.

ONE QUIBBLE: The only thing on this new disc that looks like crap is the opening Universal logo; it looks like they sourced it from an eighties VHS tape. Then the film proper begins, and it is beautiful. Why is this? Is this the transfer technicians providing a sly dig at a “source studio” that may have been less than cooperative? It really stands out. What is going on here?

MUSIC SOARS: Flash! Ah-ah! He'll save every one of us!

DeLaurentis certainly spared no expense to secure an international cast full of big stars and beloved character actors. Here we find Max Von Sydow from The Seventh Seal and The Exorcist playing lead villain Ming the Merciless; Topol from Fiddler on the Roof as Dr. Hans Zarkov; Timothy Dalton, seven years away from playing James Bond, as Prince Barin; Brian Blessed, nine years from appearing in Kenneth Branagh’s string of Shakespeare films, as Prince Vultan; Mariangelo Melato from Lina Wertmuller’s The Seduction of Mimi and Swept Away as Kala; Kubrick favorite Philip (“No, sir. You’ve always been the caretaker…”) Stone as High Priest Zogi; and newcomers Sam Jones and Melody Anderson as Flash and Dale Arden. Good Lord! Richard O’Brian, the author of The Rocky Horror Picture Show and Robbie “Hagrid” Coltrane even show up in cameos! This film is not only a visual feast, but also a smorgasbord for character actor lovers like me.

Although I remember eighteen-year-old JB resisting the film (Back then, I thought it was “silly.”) I have since come around to the film’s appealing mix of genuineness and camp. Mike Hodges’ direction keeps DeLaurentis and Donati’s excesses from sinking the picture; the sincere performances by the leads balance out Semple’s script flourishes. It’s a balancing act and a magic trick, and the film works. I regard Flash Gordon as one of the Ten Best “Comic Strip Movies” ever made.

This single disc is reason alone to upgrade your system to 4K. That’s how immaculate and spot-on this transfer is! Arrow gives us two options to purchase it in 4K: 1) a two disc extra-special edition, featuring the new documentary Life After Flash about lead actor Sam Jones; bountiful featurettes, including interviews not included in the documentary; poster and lobby card reproductions; and a booklet with five new critical essays, or 2) a single disc special edition containing everything on the two-disc edition, except the new documentary and paper extras. On September 10, Amazon will have the two-disc version for $35; the single disc currently sells for $20. These facts should lead to a certain amount of Flash-inspired soul searching among my readers! How much do you love Flash Gordon? How much do you love Sam Jones? How much do you love paper? I thought so… 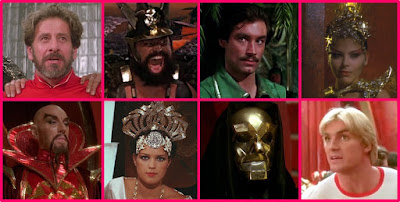 OKAY, ASSUMING YOU ARE ONE OF THE ONE OR TWO PEOPLE WHO READ MY COLUMN AND DO NOT KNOW THE SNG, HERE IS A LINK TO THE MUSIC VIDEO. CLICK THE LINK! DO IT! LET’S ALL SING IT WITH GUSTO!

Flash! Ah-ah!
Savior of the universe!

Flash! Ah-ah!
He'll save every one of us!