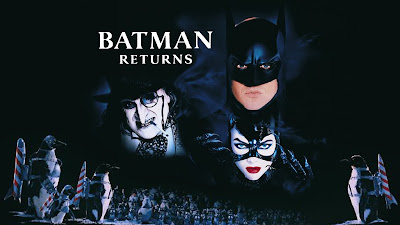 We went from politicians to living in the sewer.

Adam: Welcome back to Summer ‘92 Redux, our revisit of the Summer 1992 movie season. This week we’re discussing Tim Burton’s return to the Dark Knight, Batman Returns, which was the most-anticipated and highest-grossing movie from the Summer of 1992. It stars Michael Keaton returning as Bruce Wayne/Batman as he tries to protect Gotham City from corruption and bloodshed at the hands of three new villains: the Penguin (Danny DeVito), Catwoman (Michelle Pfeiffer), and evil baron Max Schreck (Christopher Walken). The first Batman from 1989 was accused of being dark (which it was in comparison to the ‘60 television show), but that movie’s nothing compared to the subject matter and subtext of Batman Returns. I’ve seen this movie at least ten times over the years and this viewing was the most unsettling watch I’ve had with it. I did not enjoy it despite recognizing its power and craft. It’s a movie I’ve really wrestled with since 1992. I’ve gone back-and-forth thinking it’s the best Batman of the Tim Burton-Joel Schumacher era (era), but also one of my least favorite. It holds the esteem of being the first movie I saw in theaters (at age 10) where I was thought “You know, I don’t think I liked that.” It was heartbreaking to me at the time because I couldn’t have been anticipating it more. What I think I was responding to is it’s much more of a Tim Burton freakshow movie than a Batman movie. It feels like (based on the course correction Warner Bros did with Batman Forever) Burton got away with something here and used up the goodwill he earned from the extremely lucrative Batman (1989).

What did you think of Batman Returns on this watch? Did you like it more or less than the original Batman when you first saw it in 1992? 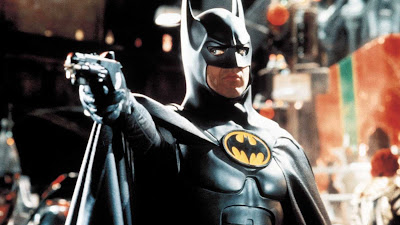 Patrick: Oh, I definitely liked it less. The original Batman will always hold a special place in my heart because it’s the most excited I’ve ever been for a movie and still might be the one I saw in theaters the most times. It’s a touchstone event in my life, even though as an adult I like the movie a lot less than I did as a kid. I’m sure I enjoyed Returns when I saw it in Summer 1992 because it had Batman in it, but it couldn’t live up to the place the original held in my heart. I don’t think it delivered the same things I wanted from a Batman movie, which is to say Batman action.

As an adult, the reasons I liked it less are probably the same reasons I like it more. It’s really a twisted character study about badly damaged people -- or, as you put it more eloquently, a Tim Burton freakshow. Batman once again takes a backseat in his own movie, but at least his character is examined more in comparison to The Penguin and Catwoman -- they’re all three sides of the same fucked up coin. If nothing else, I think Returns gets the edge just for Michelle Pfeiffer’s performance as Catwoman/Selina Kyle. She’s the MVP not just of this movie, but of this whole original franchise.

The stuff with Selina played better than it ever has for me on this rewatch, as the movie is speaking to the same major issues about the treatment and marginalization of women that we’re still facing today. I’d like to say the film is ahead of its time in that way, but the truth is that these are just the same problems that have been present for decades. Same goes for the political stuff, which is kind of like A Face in the Crowd reimagined with demented supervillains. You mentioned to me on a call the other day that the Penguin/Max Shreck stuff was harder for you to watch in 2020 because of the way it predicts so much of our current political climate. I agree with that, but I give the movie points for the satire. Between that stuff and the Selina Kyle stuff, would you say Batman Returns is surprisingly prescient about where we’re at in 2020?

Adam: It is. I think the movie has a lot on its mind and, as I mentioned to you before, it’s probably the best story of the first four Burton-Schumacher Batman movies. I just find the movie really despairing and I don’t enjoy watching it right now. I agree with your assessment of Michelle Pfeiffer’s performance as Catwoman/Selina Kyle. It’s an incredibly charismatic and frayed take on the character. Pfeiffer’s normally so luminous on screen, but here the damaged woman is what comes across the most. I also think this is Danny DeVito’s best work on screen. He’s buried himself into this character in a way I think Heath Ledger later got credit for in The Dark Knight, but I don’t think DeVito ever really did. He’s vile and really leans into the ugliness of the character. When combined with Christopher Walken’s character, the two of them form a composite that is very similar to you-know-who and that was hard for me to escape. This is also an interesting Batman movie because Bruce Wayne is positing that good will win out even in the face of absolute corruption and on this viewing that sounded sadly hollow to me; like a platitude I could no longer get behind even if I want to believe it. I thought about something as a kind of joke in the past few months but there’s some truth to it: What is the point of focusing our escapism on superheroes when banal evils are what’s insidious about the world? Obviously, superheroes don’t exist but if COVID-19 and police brutality (to use a couple of examples) existed in their world what would they really be able to do about it? 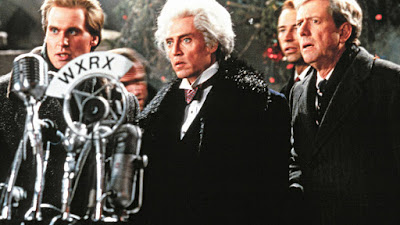 Sorry for the rambling, half-formed, nonsensical fantasy musings. Batman Returns kind of messed me up this viewing. I’ve never wanted to watch Batman & Robin again more in my life. I might be ticking people off when I say this, but I prefer my Batman to be Happy Meal ready and not a dark reflection of society’s ills.

What do you think of the more expressionistic design of Gotham City in Returns compared to the more urban setting feel to Batman (1989)?

Patrick: I completely understand where you’re coming from but weirdly had the opposite reaction on this revisit. There was something I found comforting about a) seeing Catwoman take her true form and exact revenge on the sons of bitches who had wronged her and b) a corrupt politician being presented in his true form as well: vile and ugly and disgusting, winding up face down in a river as bile runs down his chin. It’s amazing to me how nasty Tim Burton and Danny DeVito make The Penguin given that the movie is ostensibly a four-quadrant “family” film. There’s nothing four quadrant about Batman Returns. It’s practically a horror film ripped directly from Tim Burton’s psyche. This is the movie I suspect he would have made the first time around, only the success of the original Batman gave him the blank check he needed to make a sequel in his own image.

I love what you say about Danny DeVito disappearing into this character, and you’re absolutely right. It’s like he was born to play this role, and without him they couldn’t have done it. You’re right, too, about it being every bit as transformative as Heath Ledger’s Dark Knight turn as The Joker. I think the big difference here is that The Joker (as played by Heath Ledger) was enigmatic and charismatic, whereas DeVito’s Penguin is horrible and repellent. It’s a case of him playing the part a little too well, pushing people away instead of drawing them in. But you’re right -- he’s every bit as worthy of celebration and accolades.

I like the expressionistic design here. I think it helps that the movie takes place in winter (Christmas movie!), but I like the setting even more here than I do in the original film. It’s a gorgeous movie. What about you?

Here’s something: I love Christopher Walken in this movie, even if I think the character of Max Shreck is maybe one villain too many (a problem to which the sequels would succumb time and again). Do you think this is a better or more interesting movie if they had gone through with the original plan of making this character Harvey Dent? It would have carried over his introduction in the original film, and his fate at the end wouldn’t have killed him, but rather would have turned him into Two-Face, setting him up to be the villain of a third movie. And do you think Batman Returns could have supported the inclusion of Robin (set to be played by Marlon Wayans)? He was scrapped at the last minute, and while the reasons beyond him being scrapped are kind of disgusting -- I think they were racially-based -- I don’t think this movie can carry the weight of yet another major character. I don’t miss Robin and I don’t think he fits in this movie, which really is about the triangle of these three broken misfits.

Adam: I think adding Two-Face and Robin to Batman Returns would be taking focus away from Keaton-DeVito-Pfeiffer-Walken unnecessarily. It makes sense for Walken to be Harvey Dent (based on his demise in the movie) but the approach the filmmakers took of creating a brand-new character and removing the Two-Face checkboxes frees up Walken to just be a bastard with no redeeming qualities. I don’t think Robin fits in Batman Returns at all. I’m happy with how the character was handled in Batman Forever, too, so I wouldn’t want to replace that. I can totally see Marlon Wayans as Robin in Batman Forever. I wonder what his audition or screen tests were like for Batman Returns since his Requiem for a Dream performance feels closer in mood to Batman Returns than Wayans’ predominately light comedic work. 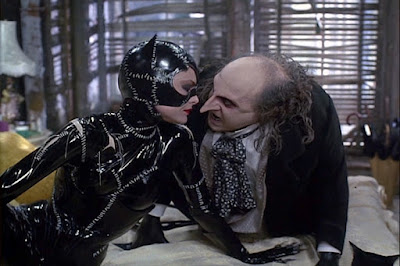 I have one observation left and a question for you. I had the subtitles on when I watched Batman Returns this time (my air conditioning is loud) and I finally realized the soup Alfred gave Bruce is called Vichyssoise. I went 28 years thinking it was “Fishy Swail” and thinking to myself “That’s not a soup. I’m giving this movie 2.5 stars!” And my question for you is - Do you think Batman (1989) and Batman Returns botch the Michael Keaton casting? As a fan of his, I think these movies mute what he’s good at. They’re performances that don’t need Michael Keaton’s talents.

Patrick: I agree that something like Beetlejuice is a better showcase for what Michael Keaton brings to the table, but I’ve always appreciated how internal his Batman/Bruce Wayne is. His casting has always made sense to me (and I suspect is the reason Tim Burton picked him) because he seems like enough of a giant weirdo that he might actually dress up like a bat and fight crime. He’s muted, yes, which is probably why he gets so overshadowed in both of his outings despite being the title character. But I think his muted-ness (a word, I promise) works better in Returns than in the first movie specifically because it’s a movie about the psychology of these people. His denial of who he really is gets brought out by Selina Kyle -- yet another reason she’s the best character in any of these movies. Minus Chase Meridian, of course.

Adam: Why isn’t there a DC show called Chase just about her in college learning to become a psychologist? The opening credits song could be “Independent Love Song” by Scarlet. Chase is still played by Nicole Kidman, but with de-aging technology. I’ve thought about this before.

We’ll be back next week with a review of Unlawful Entry, starring Kurt Russell, Ray Liotta and Madeleine Stowe. See you next time.