Mondo movies are salacious documentary films that focus on strange sex, strange cuisine, and strange social customs. Mondo Cane (“Doggish World”), written and directed by the team of Paolo Cavera, Franco Prosperi, and Gualtiero Jacopetti, was a sensation when it was first released in 1962. The Italian production included a theme song, “More,” that was actually nominated for an Academy Award. (It lost to “Call Me Irresponsible” from Papa’s Delicate Condition.) The film features segments devoted to naked New Guinea native women chasing eligible bachelors; snakes sold for food in Singapore and dogs sold for food in Taiwan; baby chicks in Rome being dyed bright colors to be included in Easter eggs; distraught dog owners mourning their losses at a pet cemetery in Pasadena, California; and back in New Guinea, a woman breastfeeding a baby pig. In all, there are more than 35 segments in a film that runs just shy of two hours. With the average segment running less than four minutes, we might assume that Mondo Cane was very popular with people with short attention spans. This phenomenon should have inspired its own exploitative documentary film, Mondo dei Facilmente Distratti! 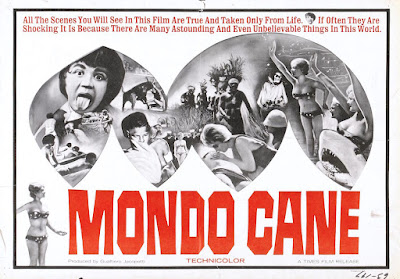 Severin Films has released a Blu-ray disc of Mondo Balordo (“Fool’s World”) a 1964 entry in the series, which stands as representative of the genre, with its own cool theme song and narration by a slumming Boris Karloff. 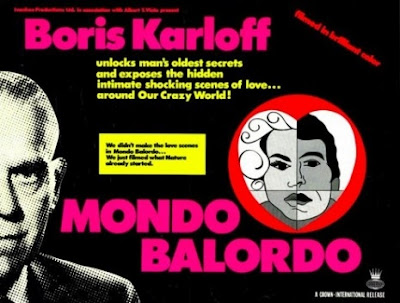 1. The opening credits, featuring the song “Our World,” which I quoted above. The song is hypnotic in its awfulness and after some searching, I discovered lead singer Andy Badala is actually Angelo Badalamenti, film composer and frequent collaborator with David Lynch. He wrote the score for Blue Velvet and the haunting Twin Peaks love theme, “Falling,” sung by Julee Cruise.

2. The introduction, in which narrator Boris Karloff informs us that what we are about to see is so much worse than anything seen in the monster movies made during his heyday. This sort of warning is de rigueur in Mondo movies. The producers were lucky to secure the services of Karloff, although I imagine his participation in the film took all of a single afternoon. His distinctive voice is that only thing that makes this crazy collage film watchable.

3. A sailor dates a little person; they make love in a compact car. 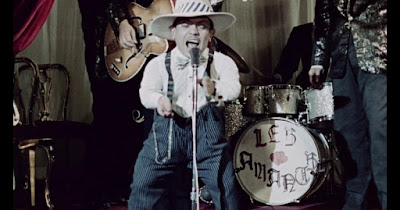 4. Franz Drago is a little person; his nightclub act features imitations of popular singers. We see him performing as Louis Prima. He also drops his pants. (At this point the viewer wishes that, besides performing a 4K scan of the original inter-negative, Severin Films had “chapter stopped” each segment of the film.)

5. We are taken behind the scenes of an Italian “sword and sandal” film where we are shown members of the crew picking up large pieces of the set and mammoth fake stone columns and carting them away to the trash.

6. Mr. Paddy Hughes runs an exercise school for English ladies. The women do low impact aerobics and sing operatic arias. Listening to Karloff go on and on about this guy named “Hughes” immediately summoned memories of his memorable voice acting in How the Grinch Stole Christmas. Karloff makes the word “Hughes” sound uncannily like “Hooze.” I kept waiting for a shock cut to the Grinch, up in his mountain hideaway, “just hating the Hooze.”

7. (I pause to reflect that at this point in the film, we are only NINE MINUTES IN. This is going to be a long one.)

8. Bedouins show tourists their women performing a mediocre sabre dance. For a price, the tourist men can arrange to sleep with one of the dancing women. We are told that “the Bedouins have given up their flocks of sheep for flocks of girls.”

9. Beauty pageant contestants in Las Vegas are judged by the size of their breasts. The money raised by this live extravaganza is used to help preserve the pyramids of Egypt.

10. An Asian girl strips in Hong Kong. Dozens of identical Asian men smoke cigarettes and gawk from the audience. A photographer ties bikini-clad models with rope and photographs them. A nightclub features the models performing live, joyfully trying to escape their bondage. The well-dressed men in the audience are said to be “rich and well-connected.”

11. Male zebras flight to be the boss of the herd in Africa. They are eaten by lions. This sequence is quite graphic. An elephant is hunted and killed. Natives take the meat; the “white hunter” takes home the tusks. Buzzards circle overhead.

12. In Italy, a 24-year-old woman marries an 81-year-old man. The woman is a prostitute; the best man is her pimp. The ceremony is to ensure that she is not deported. The old man seems happy. 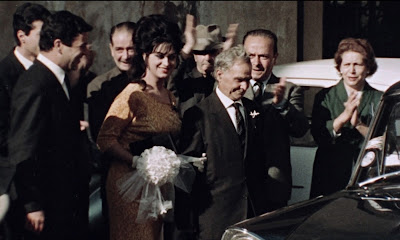 13. At the “Barrio Chino” in Barcelona, gentlemen dress as ladies and dance. One of them looks suspiciously like '60s children’s entertainer Soupy Sales.

14. In Munich, Germany, college students throw themselves a tradition German Beer Hall Party. Once inebriated, the students fence with real sabers, hoping for an impressive dueling scar. These scars seem like the rough equivalent of drunken American college students’ tattoos.

16. (My God, my God, we are only 30 minutes in; we have a full hour to go. I could’ve watched How the Grinch Stole Christmas three times in the time it will take me to watch Mondo Ballordo.)

17. “Lula Park” in “Northern Europe” features a freak show where the patrons buying tickets to gawk are shown to be the “real freaks.” Bikini-clad women are shown wrestling; no woman is a victor until she pops the balloon tied to her opponent. Men gawk at another show in which women’s skirts are blown up in the air by a hose.

18. In Ceylon, native hunters hunt and kill giant sea turtles. This sequence is quite graphic.

20. In Malabar, India, a “medicine man” puts on an impressive show, featuring a drumline and fire effects, intended to cure a very sick native man. A chicken is slaughtered and the sick man eats it raw as part of the ritual. I hope the man did not later succumb to salmonella.

22. Hong Kong prostitutes go through withdrawal when they cannot get their daily dose of heroin. This sequence looks staged. A Chinese opium den is then shown, looking suspiciously as if it were filmed on the same sound stage as the previous segment.

23. The Maharaja of Mysore, India stages a huge parade that causes it to rain. Turns out he schedules the parade every year on a day when the local weather service predicts it will rain.

25. Natives in Kuhalo, the Archipelago of Desolation, report that after a strange object fell from the sky into their river, all plant and animal life died.

27. In Naples, Italy, a wall is erected to hide a shanty town full of poor people from the more prosperous neighboring town. Smuggler Antonio supplies cigarettes to the poor. Antonio eventually abandons his profession to become a stuntman in Italian films. The marketplace in Naples is shown to be full of smuggled merchandise. The Neapolitans revere the dead and pray to them faithfully, most often to obtain winning lottery numbers. The lottery is very popular in Naples. Also popular is the concept of “the evil eye.” Itinerate conmen are shown exorcising the evil spirits by burning incense for a fee. (This sequence, over seven minutes long, is the longest in the film, and makes one wish that the film’s other sequences were similarly well developed. Of course, if all the sequences were as long as this one, Mondo Balordo would only contain twelve of them, instead of the thirty or forty that, based on the evidence, Mondo fans clearly CRAVED.)

28. A vaudeville theater features numbers from a new show. The show’s featured dancer believes he is the living reincarnation of Rudolph Valentino. He is not. The Faux Vantino is shown whipping the other dancers.

29. In a Southern Italian town, a poor man scours the town in search of human excrement with which to fertilize his fields. The local townspeople oblige.

30. Feurba Guenther, the street of Roman artists, devotes its space once a year to poor, local artists. The artists smoke cigarettes and dance. Buzzards circle overhead.

31. Italian dogs run amuck. Dogs with cancer receive operations. (At this point I wonder if, because Mondo Cane established the genre, if every proper Mondo film that followed was required to feature a sequence involving dogs.)

33. In Saudi Arabia, camel urine is collected and used by local beauticians to turn brunettes into blondes. I am not making this up. You can tell the filmmakers thought this sequence a whiz-bang hilarity, so they saved it for the end. The urine is lovingly showed in buckets, in sponges, and poured over women’s heads. Yuck.

34. New Guinea natives use indigenous berries to dye their hair. In Pau Pau, new brides and grooms have their hair styled before the ceremony. The wedding contains much ritual dance. Haiti ritual dances are compared to those performed by rock ‘n’ rollers. (Strangely enough, the Italian “rock ‘n’ roller” is shown performing with the same backing band as Franz Drago in segment #4.) 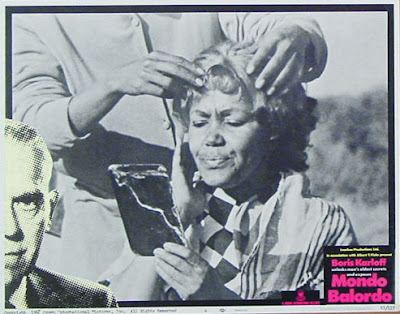 36. Campers are shown enjoying the outdoors. This sequence looks and sounds like a “Swinging Sixties” Pepsi commercial. The campers play some sort of kissing game. Another version of the kissing game is shown that involves participants stripping. Men try to guess whose wife is stripping with a black hood hiding her head. The post-synch dialogue here is particularly obnoxious. The woman removes her hood once she is down to a bra and panties and laughs like a lunatic. Buzzards circle overhead.

37. An American “Lover’s Lane” is presented, complete with local Peeping Toms. Men are shown looking at antique peepshows and employing telescopes to spy on crowded beaches. Women in scanty bikinis parade around from boredom. Italian tourists hook up on the beach. They rent small boats for their assignations. The fisherman of Capri are notorious womanizers. The film shamelessly promotes a vacation in Italy this year.

38. Men and women go wild at a soccer game. Fistfights erupt. A band plays. Women parade the streets in fancy dresses. Buzzards circle overhead. All sense of time is lost. The singularity is achieved.

That’s about it. The film is, by turns, offensive, annoying, boring, and infuriating. The new Blu-ray disc also features the film Mondo Orientale as a bonus feature. Severin has also released three more Mondo double-feature discs to satisfy one’s craving for this sort of thing: Mondo Freudo & Mondo Bizarro; Ecco & The Forbidden; and The Wild, Wild World of Jayne Mansfield & Italian Come Noi. I bought all of these discs eagerly at Severin’s recent sale; I must say that Mondo Ballordo has extinguished my burning desire to sample more Mondo. If you are interested in this disreputable genre (which some credit with inspiring both the Italian Cannibal Film craze and the Faces of Death video series in the Eighties) you can check out the Alpha/Omega of the genre on the YouTube machine—both the original Mondo Cane and Mr. Mike’s Mondo Video are available there for free.

OH AND BY THE WAY: Those of you who were, how shall I say, rendered curious by the lyrics that prefaced this piece? Here’s the whole song; it’s a doozy.

Well, I thought it all in vain
Not worth tears and pain
Standing on this cold terrain
Then I met you…

Our world…
What a crazy place we dwell in.
Our world…
It’s a globe we whirl pell-mell in.
A sea…
Of despair that I once fell in.
But I reached the golden shore…
When I fell in love with you.