At last we come to the intersection between classic horror… and Cary Grant.

Apparently in the mid 1950’s, Alfred Hitchcock lured Cary Grant back to the screen to star in To Catch a Thief, and his contract with Universal involve profit sharing, which was then a very new concept. I believe the Jimmy Stewart had the first profit-sharing contract on the film Winchester ’73, but don't quote me. Cary Grant made a lot of money from To Catch a Thief, and apparently, when he was later vacationing in England, he paid a visit to Hammer Studios. Not at all jokingly, he told them he would like to make a horror film at Hammer. (Hammer at that time was distributed in United States by Universal, the studio that made To Catch a Thief.) Critics have theorized that he was looking for profit participation in a horror film that he he thought would go right to the bank. Anthony Hinds, the main producer at Hammer, started thinking about this; he also wrote scripts under the nom de plume of John Elder. He thought Cary Grant would be perfect for a new remake of Phantom of the Opera, which Universal had made twice before: once in 1925 with Lon Chaney, famously, and once in 1943 with Claude Rains, less famously. 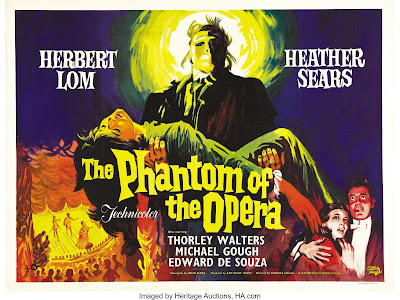 Scream Factory has just released a scrumptious Blu-ray disc of the 1962 Phantom of the Opera, which I hold very close to my black little heart because, friends and family, this is the Phantom I grew up with. I was aware of the 1925 Chaney version. I believe I checked it out of the library on 8 mm and screened it in my basement from my little clickety clack clickety clack Super 8mm projector, projecting it onto a sheet because even though I got the projector for Christmas, I didn't get the screen till my birthday. I was aware of the lavish, Technicolor Claude Raines’ version, which better minds than mine have called “a lot more Opera than Phantom,” but maybe (because this is the version I grew up watching a lot on the famed Channel 7 3:30 Movie, this is the Phantom that was closest to my heart. This is what I always thought the story was; I thought the Chaney version and the Claude Rains version had gone off the rails from the original Gaston Leroux story; I didn't realize that it was this version that was substantially rewritten.

And therein lies a tale because Anthony Hinds thought he was writing a script for Cary Grant. Hinds wanted to make the Phantom sympathetic, and that's hard to do with the number of murders that the Phantom commits in the original story. Hinds creates a new backstory for the Phantom that makes him very sympathetic. In this version, he's Prof. Petrie (Herbert Lom), a musicologist who sells the rights to all of his music to an awful rich man, Lord Ambrose Darcy (Michael Gough), who proceeds to steal it from him by claiming that he is the author. In trying to destroy the music from being published and printed, Petrie hideously scars himself with acid and fire and winds up in the Paris catacombs. Hinds also added the new character of a murderous dwarf. Said dwarf (Ian Wilson) commits all the mayhem in the film, leaving the Phantom to be relatively innocent. We are not quite sure who this dwarf is. We are not quite sure what his motivation is. We are not quite sure what his relationship with the Phantom is, and this is one of the reasons why a lot of people shit on the film; it takes liberties with the source novel. 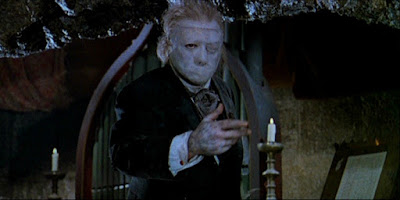 Herbert Lom (who is an actor I think most people are familiar with because he played straight man Inspector Dreyfuss in the original Pink Panther films.) was an actor with a very long career, and he does such a beautiful job here as the Phantom. I have a feeling that one of the reasons he was hired is the same reason that Claude Rains was hired, not only for the remake of Phantom of the Opera but also for the original Invisible Man: his voice. Herbert Lom has this beautiful, musical, creepy, low voice that is effective, considering that he goes through most of the film wearing a mask. That mask by the way is a triumph of production design. It's one of the hidden pleasures of this version of the Phantom, given that every time we see the Phantom, we see the mask.

Why do people shit on this version of Phantom of the Opera? This is a really solid adaptation; it looks beautiful, the lighting and the cinematography are excellent, the sets are really cool and complex, the makeup is suitably horrific, the performances are great Michael Gough plays the villain; he’s wonderfully slimy as Darcy and lacks only a mustache to twirl. Edwin Astley, the composer of the film’s score, actually wrote passages of a new opera just for the movie. It's an opera that didn't exist before, based on St. Joan of Arc. This film has a lot to recommend it. I have a feeling I know one of the other reasons that some people shit on this version of the film 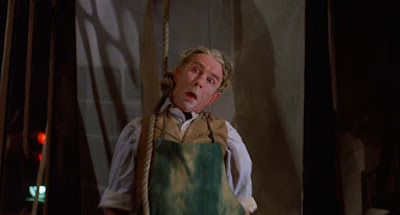 Most, if not all, of Hammer’s previous horror films had been rated X in Britain, meaning only adults could see them. Because they were spending a lot more money on Phantom of the Opera, Hammer decided to go for an A certificate, which would let children see it. Of course, the trade-off was we couldn't quite have the horror content of the earlier horror films. Then, when the film was released in England, it was subjected to further cuts. The version that played in the United States, distributed by Universal Pictures, was not all cut up, though it was the original version that qualified for an A rating in England; it did not have the further cuts. I don't think it's an accident that the film was not a success in England, but it was a tremendous success in the United States.

Scream Factory’s new Blu-ray is a sight to behold. The terrific job that Scream Factory has been doing for the last couple years on these Hammer Films means that we horror fans can never properly thank them. These are beautiful discs; they all have boatloads of special features. This new Phantom of the Opera disc has two excellent audio commentaries (not just one, but two!) and lots of little featurettes, including one on the making of the film that's actually narrated by Edward De Souza, who played Harry Hunter in the original film. It’s so very nice that he still alive, and it's very nice that he appears in the special features. I've never seen this film look this beautiful, and this is a Hammer film that I'm very, very familiar with. This this this this this! 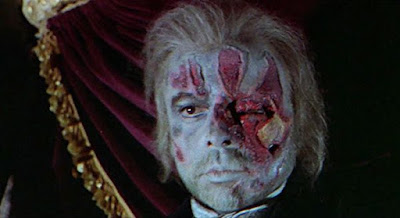 Again, I'm very high on the work that Scream Factory is doing and… dare I say… perhaps Scream Factory should think about sponsoring the Scary Movie Month podcast that Patrick and I are now in the planning stages of. We are planning to do a podcast on “All of Hammer” (or “Most of Hammer”) I'm really looking forward to it. I'm already furiously watching the films that I need to catch up on. I think it's going to be really special. Of course, I could be wrong.

Or drop a chandelier on you when you least expect it. Ouch.