Two for One: THE TAKING OF PELHAM ONE TWO THREE & MONEY TRAIN 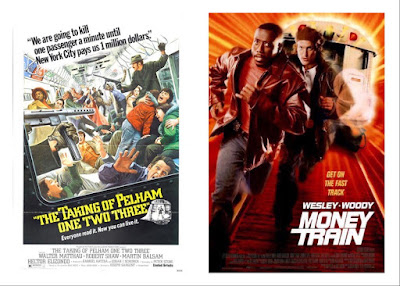 “What's the matter with everybody? How many hijacked trains have we got around here, anyway?” - Lt. Zachary Garber

I love cop movies. Cops, not so much. My movie love began with the cop films of '80s (Lethal Weapon, Die Hard, Tango & Cash, etc.). In fact, I love cop movies so much I have a podcast dedicated to them called Neon Badges (patreon.com/neon badges) that officially launches September 1st. So in honor of that, I thought I'd double two of my favorite cop movies. And it just so happens these two movies are centered around the New York City subway.

We begin our evening with one of my favorite films of all time: Joseph Sargent's original The Taking of Pelham One Two Three. The remake with Denzel and Travolta is fine, but it doesn't hold a candle to this 1974 masterpiece. We follow Lt. Zachary Garber (Walter Matthau) of the NYC Transit Police as he deals with a hostage situation happening on one of his trains. The hijackers are led by Mr. Blue (Robert Shaw), a bad guy who is so charming you just can't help but like him a little bit. The rest of the hijackers are comprised of Martin Balsam as Mr. Green, Hector Elizondo as Mr. Gray, and Earl Hindman (Wilson from Home Improvement!) as Mr. Brown. Their demands are simple: $1 million in one hour or a hostage is executed every minute the money is late. 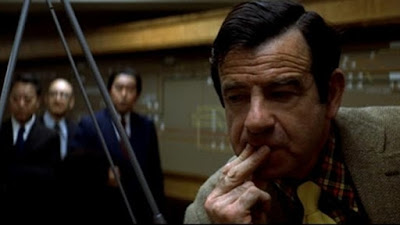 Everything about this film hits just the right spot. It's exciting. Are the robbers going to get away with it? How are the cops supposed to stop them? It's funny. Between Matthau and his partner, Rico Patrone (played by Jerry Stiller), you'll be rolling. Both men are so sarcastically witty it's a wonder how people kept a straight face while filming. And the music is killer. With a score by David Shire, it's the exact sound you'd hear in your head if someone described this movie to you.

While it has a 100% on Rotten Tomatoes (who cares), and it cleaned up at the box office in 1974, I still feel like not a lot of people have seen the original Pelham. It came out in the heyday of the disaster films where people were flocking to theaters and drive-ins to see Airport, The Towering Inferno, and The Poseidon Adventure. But unlike those ensemble movies, Pelham takes two well-known actors, surrounds them with virtually unknowns, and creates a truly riveting heist movie. We know our leads will save the day and live in those other disaster flicks, but in Pelham, the hijackers are charming enough we don't know how this is really going to turn out.

For our second film, we jump ahead 20 years, but we stay underground in NYC for Joseph Ruben's Money Train. Let me start by saying this: Yes, I bought the Blu-ray of Money Train specifically for this article. And yes, I'm happy I now own the Blu-ray of Money Train. Technically I'm going over my recommended time limit for a double feature here (214 minutes). But, this was the very first pairing I thought of before I even pitched the idea for this series to Patrick, so I just had to include it. 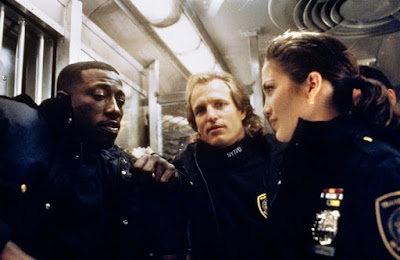 Money Train came out in 1995 when I was 13 years old. It's hard to think of a better movie for a 13-year-old kid. Some swearing, brief nudity, trains, a little violence, Wesley-fucking-Snipes, and Woody from Cheers. Here, Wesley and Woody team up again three years after White Men Can't Jump as foster brothers/NYC transit cops. The plot is... a lot. There's so much happening here. Where to begin? Wesley and Woody always seem to be pissing off the man in charge of the transit authority as played by Robert Blake by making his revenue train late; there's a firebug on the loose played by Chris Cooper in his creepiest role ever; a new cop (Jennifer Lopez) nabs the hearts of both brothers; Woody wants to rob Blake's revenue train. There are three episodes of television here, all entertaining, but when combined make for a messy movie. But I'm not looking for flawlessly artful execution in a movie about hijacking a subway car full of money. It does its job.

Money Train looks and sounds like it came from the mid-'90s. For me, there's nothing more comfortable than a movie that feels like 1995. We have Woody wearing a backwards, fluffy flat cap, and Melissa Etheridge pumping on the soundtrack while J. Lo and Wesley make sweet, sweet love. Wesley gets to showcase all of his talents here: he dances to salsa music, he rides a dirt bike through Times Square on New Year's Eve, he tells jokes, he gets to use all of his martial arts moves at a strip club, and he saves a woman from a burning toll booth. I won't call Money Train a great movie, but I will say it's fun as hell.

Cop movies are fun. The less realistic, the better. And there's nothing less realistic than Walter Matthau as a cop or Woody Harrelson stealing a train.
Posted by Patrick Bromley at 12:00 PM