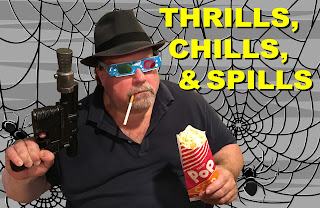 I do not wish for planes to crash. But… if they are to crash… in a movie… I will absolutely watch the shit out of that movie. I love disaster movies. I have written a bunch of columns about disaster movies, but I forgot the mother of them all...

A few months back I read the Arthur Hailey book upon which the film is based. I was surprised that the film is so faithful to the book; perhaps the filmmakers decided to play it safe because the book was a mammoth bestseller and they did not want to disappoint readers. I also discovered which plot points did not make the filmmakers’ cut. The book features a substantial subplot concerning an alcoholic air traffic controller who is slowly losing his mind. Perhaps this section hit the curb because the studio felt they were pushing enough nervous flyers’ buttons (what with the stowaway subplot and the MAD BOMBER subplot) that adding the suggestion that one’s plane is being guided through the friendly skies by a suicidal alcoholic was just a bit too much. 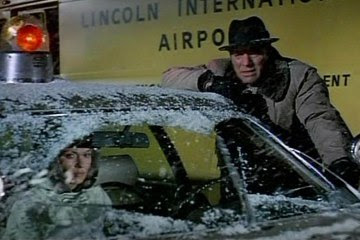 I also received a heavy dose of “The Sixties Were A Different Time, Man” when reading all of the material devoted to a certain character’s breasts. One of the characters in the book spends a lot of time noticing, admiring, and talking to herself about her own breasts. My lovely wife (who has been a woman for many years) assures me this is not a defining characteristic of most women’s complex interior lives. Other characters also notice her breasts and talk to each other about them. I could not imagine such material being written in a book today, and on screen it would have been even more laughable than it becomes on the page. These breasts are two of the most nuanced characters in the whole book.

TANGENT: Why was I reading a dusty, fifty-year-old mainstream bestseller? Because Book Bub offered it to me for two dollars. Whether I desire an iBook for my Apple devices or my Kindle, Book Bub email alerts serve up between five and eight e-books a day that are all available for two dollars or less. Though it’s taken me a while to get used to reading long pieces on my tablet, I love books and I love a good bargain. Just this morning, a collection of supernatural horror stories and a Wiccan cookbook were two of my Book Bub choices. Book Bub knows what I like. 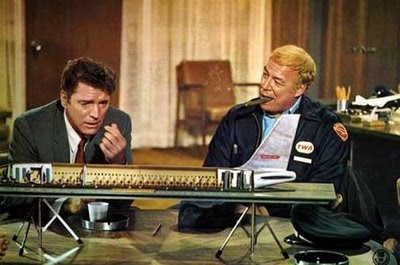 The Plot In Brief: Things are not going well on a snowy night for Mel Bakersfeld (Burt Lancaster), the head of operations for Trans-global Airlines at Chicago’s Lincoln Airport. There is an enormous plane stuck in the snow on his best runway. He is being pressured by the Aviation Board to appease a neighborhood full of disgusted homeowners tired of the noise from the planes. His marriage is falling apart because of his long hours at the airport. He is entertaining the notion of an affair with customer service head Tanya Livingston (Jean Seberg). He’s got a lot on his emotional plate.

Bakersfeld enlists the help of chief mechanic Joe Patroni (George Kennedy) to move the snowbound plane. Meanwhile, because this is a disaster film, many many other subplots are set in motion. Ada Quonsett (Helen Hayes) is a delightfully peppy senior citizen who sneaks onto Trans-global flights so that she may visit her daughter in New York for free. Vernon Demerest (Dean Martin) is a hotshot pilot who is having an affair with chief stewardess Gwen Meighen (Jacqueline Bisset). Down-on-his-luck munitions expert D.O. Guerrero (Van Heflin) plans to blow himself up on a plane, so his wife can collect the insurance money. How will all of these plots intersect? What if Guerrero forgets to blow up the plane he is on—couldn’t he blow up the plane that is stuck in the snow instead? That would really help out Bakersfeld, who is having a hard day. What if Helen Hayes won the Oscar for Best Supporting Actress? Because she did.

I am unabashed in my love for supporting players, and like most disaster movies, Airport serves up a heaping helping of meaty roles for character actors. Except for nominal lead Burt Lancaster, George Kennedy emerges as the real protagonist in the story. His performance is completely convincing as a guy who really works at an airport. Kennedy’s Patroni is the only character to appear in every film in the Airport franchise (there were eventually three sequels.) I believe it was Kennedy’s performance and the success of this film that got him bumped up to second lead in Earthquake. 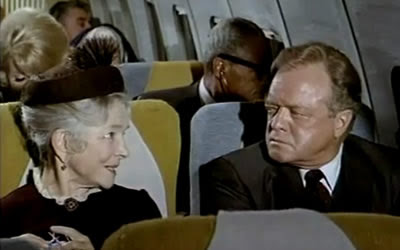 Airport also begins the disaster movie trope of showing us people doing what they’re good at. Hitchcock once observed that audiences very much like to watch characters that are good at their jobs. Besides Patroni, who is an ace at all things airplane-related, this extends to Demerest who, though played by Dean Martin with an easy grace and boozy wink, seems to really know his pilot stuff; to veteran customs agent Harry Standish (Lloyd Nolan), who figures out who the smugglers are; to cuter-than-a-button Helen Hayes as Ada, who has a great scene where she lays out in crazy detail exactly how she sneaks onto flights. I don’t think her schemes would get you very far today, but it sounds plausible in pre-TSA airports. The level of expertise on display in Airport is impressive; it speaks to the amount of research novelist Hailey must have done to write the novel. 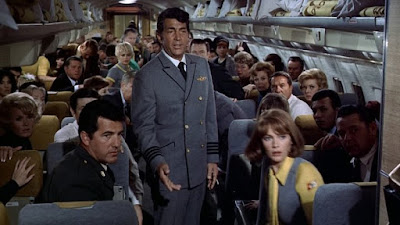 Airport also features one of my favorite characters in all of disaster movie-dom. In this movie, it’s Peter Turgeon playing “Marcus Rathbone.” But in general, I have dubbed this favorite disaster movie character “The Designated Asshole” (DA). Because of the law of conservation of characters, all main characters in a Hollywood film must serve a purpose. Airport saves a lot of time by condensing all potentially awful passengers into one monumentally awful passenger. The DA complains about paying for the bus that takes him to the airport, as if free bus transportation was an obvious God-given right. The DA foils multiple attempts to get the bomb away from Van Heflin. The DA generally act awful throughout, until finally he’s shouting “We’re all gonna die! We’re all gonna die!” until a priest—yes, a priest—slaps him in the face. Where I come from, this is a clear indication that you will be sent straight to hell. Still, somehow I don’t think Airport’s DA is punished enough. I wish there was a scene where, once they are out of danger, all the other passengers hold him down and First Lady of the American Theater Helen Hayes drops her granny drawers and takes a shit on his head. That would be something worthy of the Academy Award.

If reading this love letter to Airport has roused your curiosity about other disaster films, you can find some previous columns here:

THRILLS: 100%
(Thrilling to see this many A-list performers in danger! Who will survive?)

CHILLS: 80%
(Suspense abounds. Will that plane be safely removed from that runway so that the damaged plane might land? Will Burt Lancaster be fired as operations manager? Will George Kennedy get his free box of cigars?)

SPILLS: 95%
(A+ for some big-ticket practical effects.)