Glutton for Punishment: The Swarm

Continuing my merciless, masochistic march to see every “African Killer Bee” movie ever made, I arrive at the best one… and the worst.

We are all interested in horrible, single-minded African Killer Bees, for they are the stuff we use to fill the empty spaces in our mouths on a dare. You are interested in the unknown, the mysterious, and the stinging—that is why you are here. And now, for the first time, we are bringing to you the full story of how Houston, Texas was almost singularly destroyed by flying insects on a murderous rampage! The absurdly big budgets, the lengthy shooting schedules, the over-complicated plots, the inane dialogue, the stalwart, old-school professionalism of elderly professional actors from a previous generation—my friend, we cannot keep these a secret any longer. Let us punish the bees. Let us boycott honey in all of its forms and royal jelly used in beauty products nationwide. I WANT TO BUILD A WALL TO KEEP THE BEES OUT, AND I’M GOING TO MAKE THE BEES PAY FOR IT. Let us reward the innocent. Let us find solace in the bees’ mating call. Remember, my friends: terrible movies such as these will affect you in the future! 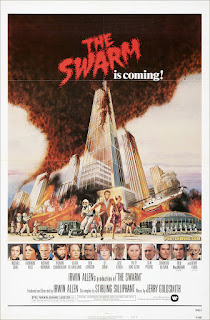 I was driven to watch this film by a possibly treatable need for completeness. After braving the laughable science and half-hearted suspense of both The Deadly Bees (1966) and The Bees (1978) I just had to watch Irwin Allen’s entry into the “Bee Sweepstakes” if only to complete my Holy Trinity of Stinging. The good news is that The Swarm is the best of the lot; Allen wisely stays in his wheelhouse, the disaster film, and does not attempt a horror film with antagonists the size of a dime. The bad news in that The Swarm is pretty awful—ridiculous, bloated, and endless. NOTE: I watched the extended director’s cut (because WHY WOULDN’T I), which adds an additional forty minutes to the film’s original 115 minute running time. That just means more bees to love.

The Plot In Brief: A mysterious force kills almost all the men at an American nuclear missile site. General Slater (Richard Widmark) and Major Baker (Bradford Dillman) investigate and discover suspicious English entomologist Brad Crane (Michael Caine) poking his nose into their business. He suspects that African Killer Bees are the culprits; they invaded the base and stung the soldiers to death. Baker and Slater immediately place Crane under arrest. Base Doctor Helena Anderson (Katharine Ross) manages to get a few soldiers to safety before the attack. She confirms that it was indeed a bee attack and that Brad Crane is indeed a world-renown bee expert. 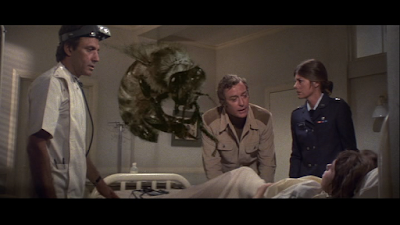 The bees swarm and attack the nearby town of Marysville, which just happens to be celebrating its annual flower festival. Many old-timey stars are trotted out as potential victims: Henry Fonda, Olivia de Havilland (repeating her Melanie accent from Gone With The Wind), Ben Johnson, José Ferrer, Slim Pickens, and Fred MacMurray.

The bees move on to Houston, and it looks like the end of mankind. The swarm targets a nuclear power plant. Will the bees emerge triumphant? Will Caine/Crane come up with a viable strategy to conquer the bees? Can this train be stopped?

Producer/director Irwin Allen and his frequent collaborator, screenwriter Sterling Silliphant, come up with a novel way of solving the dilemma of the bees’ tiny, not-scary-at-all size, but their solution invokes laughter rather than fright. The bees’ highly poisonous venom (“…more virulent than the Australian Brown-Box Jellyfish!” shouts Henry Fonda at one point) kills their victims, but not before causing hallucinations. Several times in the film we are treated to the disturbing yet risible sight of a giant free-floating bee hallucination. At one point, Katharine Ross, in the final throes of bee-fever, throws open a door. For some twisted reason, the bee hallucination is behind the door, big and floating as if he just rang the doorbell with his little front feeler. “So sorry to bother you. Have you any pollen?” 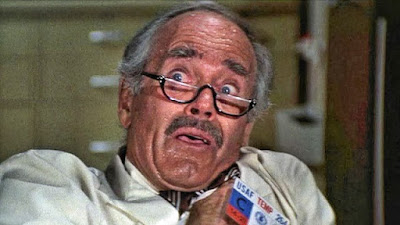 As we have come to expect in an Irwin Allen production, the dialogue is full of howlers, including the following choice examples:

“… I never dreamed that it would turn out to be the bees. They've always been our friends.”
— Michael Caine, The Swarm

“Houston on fire. Will history blame me… or the bees?”
— Richard Widmark, The Swarm

“Let me ask you. In all your fail-safe techniques, is there a provision for an attack by killer bees?”
— Richard Chamberlin, The Swarm

“No bee is that smart.”
— Richard Widmark, The Swarm 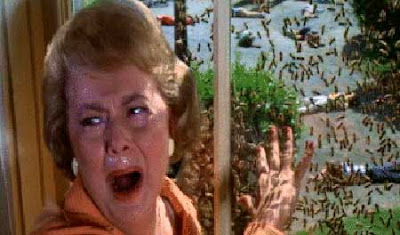 Ultimately, The Swarm is a disappointment. Michael Caine sleepwalks his way through the film, pausing occasionally to shout and overact outrageously. For a few minutes I mistook this “phoned-in” performance for cleverness. During the first hour of the film’s running time, we think the screenwriter might be hiding the fact that our scientist hero is actually the villain of the piece. That would be entertaining. Nope—it’s just more collateral damage of Michael Caine’s disengaged performance. Katharine Ross looks as if she wishes she were a million miles away. “I once acted alongside Dustin Hoffman in The Graduate! Now I’m acting alongside a sleepy Michael Caine and a thousand bees.” The special effects are only so-so. Though I have come to expect a large body count in any Irwin Allen disaster movie, the number of stars who “get it” and the ways in which they are dispatched in The Swarm seems particularly arbitrary and mean spirited.

So, do I recommend The Swarm? You’d better BEE-LEAVE it! Hahahahahaha (BLAAAAM.)

My friend, you have now read this column, based on my own sworn testimony. Can you prove that African Killer Bees don’t exist? Perhaps on your way home, you will be stung to death by bees (I hope not.) Many scientists believe that bad movies are being filmed at this very moment. We once laughed at fire, the wheel, the horseless carriage, the telephone, and that girl from the Blind Melon album cover. So much laughter! And now some of us laugh at very bad movies. God help us in the future.