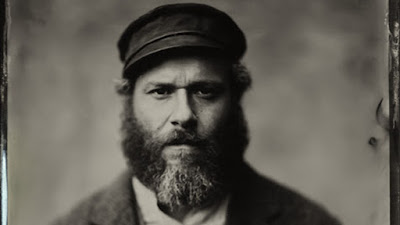 I have no significant new release to cover for you this week, so let’s break open the ol’ Letterboxd and talk 2020: 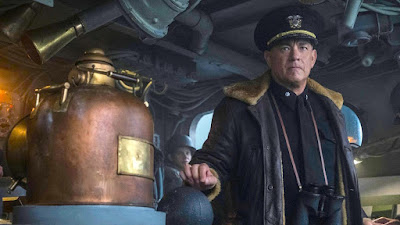 1. I understand that most of the people who have seen Greyhound only did so because their iPhone plan came with a free year of AppleTV+ (Is anyone willingly subscribing to AppleTV+?), but you could do a lot worse with ninety-one minutes on a Sunday afternoon. A tense, dialogue-heavy bottle episode consisting almost entirely of Tom Hanks barking orders and walking back and forth across a room? Sign me up. I like movies that make simple things feel complex and/or complex things feel simple. Greyhound does both. Hanks’ Commander Krause has to lead a convoy of ships through a stretch of the Atlantic too far from Allied territory to provide air cover. He plans, adapts, and executes a path around (and sometimes through) Nazi U-boats. He’s a disciplined and respected commander with a batch of character quirks that add a comforting, rhythmic quality to Greyhound’s dialogue exchanges. He does his job and takes a nap. Cinema! 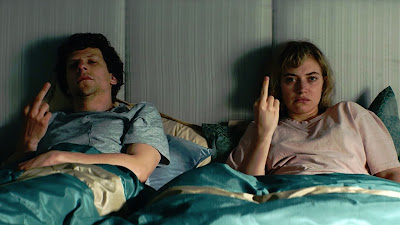 2. Vivarium is the kind of movie I would have loved when I was fifteen. I would have been all about its anti-suburban message (even though, having grown up in the suburbs, I would have been completely full of shit), and I would have poured over the IMDb message boards (RIP) searching for theories and hidden symbols that dissect its meaning. In 2020, it just feels like an extended episode of Black Mirror (or Twilight Zone or Outer Limits or...). And it’s not even that the story of a couple trapped in an endless suburban hellscape and forced to raise a nightmare child is inherently hacky (It’s almost the plot of Eraserhead). It’s just that the things I find interesting in surreal thrillers have necessarily evolved as I’ve seen more and more of them. Vivarium simply doesn’t give leads Jesse Eisenberg and Imogen Poots enough depth to make it any more than Starter Surrealism. But that’s okay! That’s not a bad thing. Everyone has to start somewhere. Like how I praise simplicity in one movie and damn it in another? I’m a mess.

3. Speaking of which: She Dies Tomorrow messed me up. I actually started to write a whole review of it but got way into my head and became crushed under the weight of my own futility. I began to wonder why we even make movies or write about movies or write words or use letters to make words or, like, get out of bed in the morning. It was not a good time, and digging into She Dies Tomorrow longer than the length of this paragraph would probably do some irreparable damage. Patrick mentioned recently that it’s a little too obtuse to really connect with (and I can see his point), but there’s this bluntness to the way Amy Seimetz presents our natural fear of death that is almost better than if she had fleshed out a working universe, as in something like It Follows. Seimetz apparently wrote the screenplay to examine the “contagious quality of anxiety,” and it comes across loud and clear. Anxiety attacks don’t make narrative sense: There’s often no real cause, no start and no finish. They’re ridiculous, frankly, and She Dies Tomorrow nails the gallows humor inherent in worrying about things that will inevitably come to pass.

4. When this is all over (He said, fingers crossed), the 2020 movie that cinephiles will probably discuss the most is Tenet. Or, at least, the release of Tenet. Or the absence, delay, and quadruple backlash surrounding all things Tenet. However, my nominee for Movie Most Screwed Over By Quarantine might be An American Pickle. Aside from having an all-time great handwave to explain how pickle brine can preserve a human life (“The scientist explains. It makes sense. Everyone is satisfied”), there are some great special effects at play in An American Pickle that go well beyond split screen doubling. Anyone see that behind-the-scenes featurette? I’ll let them explain all the nitty gritty of the green screening and beard shaving, but it just makes me feel so spoiled that I can see a quality movie like An American Pickle, enjoy it, and move on knowing that its lack of wide distribution prevents it from having the solid cultural imprint it deserves. I know this isn’t a new problem (Remember what Adam said about our lack of home screen?), but it bums me out. 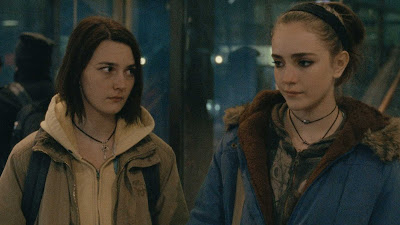 5. I really love Never Rarely Sometimes Always. Seventeen-year-old Autumn’s (Sidney Flanigan) cross-state pursuit of an abortion is like the delicate breather track on a punk rock album. We know that the rest of Autumn’s life is fraught with abuse, neglect, and desperate insecurity, but within the boundaries of Eliza Hittman’s film, we’re only privy to this one quiet interlude. Flanigan gives one of my favorite lead performances of the year, and it’s almost entirely through close-ups of her face. She has maybe twenty lines, I think? I love the way Autumn and best friend Skylar (Talia Ryder) cope with the stress of their journey, navigating a wide array of people who set out to shame and manipulate them (Théodore Pellerin delivers an especially nice performance as a slimy party boy) without compromising their relationship with each other. Unlike Juno (a movie I still defend), Never Rarely Sometimes Always also has sympathy for the doctors, social workers, and other caretakers guiding Autumn through the worst day of her life. The film effectively justifies both their inability to truly help Autumn and her inability to truly ask for it. It recognizes that Autumn is more than the problem in front of her and asks us to do the same.