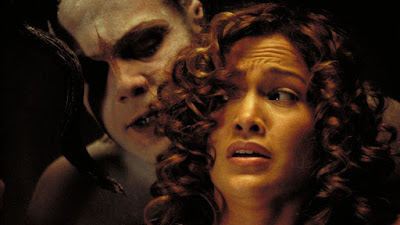 Winner of “Best Dressed” for Jennifer Lopez at the MTV Movie Awards.

Welcome to 2K Replay, the home of the year 2000 in film. This week I’m revisiting a movie I want to like more than I do: The Cell.
• Roger Knows Best: I was so excited for The Cell based on Roger Ebert’s 4-star review of the movie. He was a bit of an outlier on the film -- most critics were mixed or more mutedly favorable -- but whenever he was effusive in praise of a genre movie like The Cell or Dark City or Spawn, it made me want to see them very badly. Coincidentally, those are all New Line Cinema releases. Did Roger Ebert have a kink we didn’t recognize? I get it. Like a cigarette at the bowling alley, New Line Cinema was good back in the day.

• Random Memory: I saw The Cell on opening day with one of my friends about a week before I left for college. I distinctly remember leaving another group of friends (who decided to rent and watch American History X) to go see The Cell. I recall being very uncomfortable as a Jewish guy watching part of American History X with a group of other (mostly Jewish) teenagers. They all thought it was the greatest movie and I couldn’t stop wondering if they were thinking that for the right reasons. I’m glad I left and went to see The Cell!

• Best Merch Available on eBay Right Now: For only $19.99, you can get a promotional mouse pad for the movie featuring an image of a character trapped in a water tank. Who came up with that one? 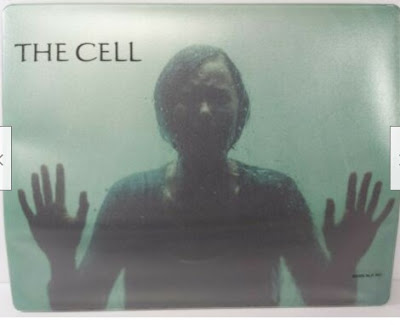 • Director Check: The Cell was directed by Tarsem Singh. The movie appears to be his feature directorial debut after helming music videos. I remember Tarsem Singh was thought of as an exciting new filmmaker around the time of The Cell (he probably was fitted with the label “visionary” at some point), but he never got quite the same buzz after this movie. He followed up The Cell with The Fall, which I remember liking, and then Immortals, Mirror Mirror and Self/less, none of which I sought out.

• Year 2000 Movies to Trailer Before It: The 6th Day, Hollow Man, Mission to Mars

Someone on YouTube made a video called “24 Reasons The Cell and Inception are the Same Movie.” It’s interesting. There’s a lot of coincidences. Bonus points to the guy who made the video because he breaks midway through and begins judging the ethics of the fictional characters in both movies. It comes out of nowhere, like he couldn’t help himself.

• How Did it Rent at Blockbuster? I vaguely remember this movie being available to rent when I was working at Blockbuster during winter break of my freshman year of college. It rented well, but that’s not saying much because any new release during the holidays rented well at Blockbuster.

• Only in 2000: Jake Weber in a prominent supporting role.

• Scene Stealer: Vincent D’Onofrio gets room to play a colorful villain and boy does he run with it. He gives the most interesting performance in the movie, helped by some terrific Oscar nominated makeup work by Michele Burke and Edouard F. Henriques.

• I Miss: Being really excited Vince Vaughn is in a movie.

• What I Thought in 2000: I remember watching the movie in reaction to Roger Ebert’s review and feeling like I missed something because I thought it was just okay.

• What I Think in 2020: Pretty much the same feelings as in 2000. For a movie as frilly and dark as The Cell, it feels conventional and safe to me for some reason; like a filmmaker who doesn’t want to go over the edge even if the material calls for it. It’s fine. I’ll probably watch it again in 2040.