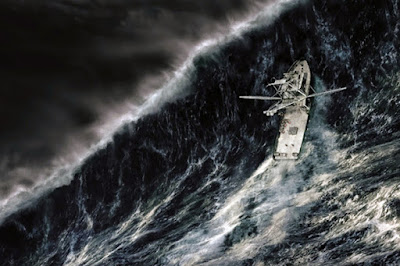 Winner of “Best Water Work” at the World Stunt Awards.

Welcome to 2K Replay, the home of the year 2000 in film. This week I’m revisiting a movie that makes me need to pee really bad: The Perfect Storm.

• Best Food: The fishermen eat boat lasagna (? I think ?) at one point. It doesn’t look good, but I still wanted some. I also want to try swordfish since they catch so many. How is it?

• Best Song: “Hungry Heart” by Bruce Springsteen and the E Street Band. It’s played at a lovelorn seaside bar, which is as on the nose as it gets.

• Best Merch Available on eBay Right Now: A 5x25” movie theater mylar for $7.95. I chose this because there weren’t many other choices and it’s also fun to say “mylar” in a New England dialect. 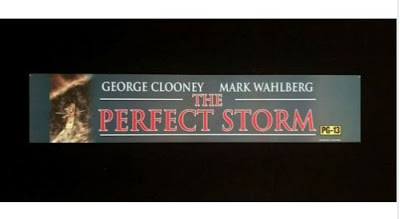 • Director Check: The Perfect Storm came at the height of Wolfgang Petersen’s Hollywood Blockbuster run in the 1990s and early 2000s. He was riding high on the successes of In the Line of Fire, Outbreak, and Air Force One as he made The Perfect Storm. Following The Perfect Storm, Petersen made Troy and a huge box office bomb, the 2006 remake Poseidon, which seemingly ended his Hollywood career. He only made one other movie after 2006, which was a German crime comedy in 2016 named Vier gegen die Bank. I’ve always thought Wolfgang Petersen was an underrated director. I would be up to marathon his movies one day. He’s a great “meat & potatoes” filmmaker.

• Double It with This 2000 Movie: Vertical Limit

Someone make a virtual sailor video that follows the events of this movie. It’s…a thing that exists.

• How Did It Rent at Blockbuster? I remember it rented well when I was back for winter break from college. It had a full shelf to itself, which Blockbuster only gave out to movies with high rental expectations. George Clooney and Mark Wahlberg were consistently renter-friendly. A lot of people bought this movie, too, because it came out on DVD in time for the holidays and people were buying almost any DVD in 2000 to build up their collections. That’s how I watched the movie this time – my old ass DVD. It’s like stepping into a time machine when you press play. I love it.

• Mall Movie? No. The Perfect Storm would play at the fancy theater in town. It’s high-concept but also carries trace elements of prestige. 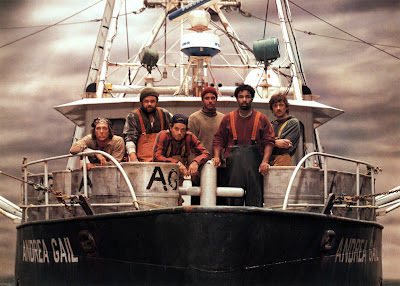 • I Don’t Miss (tie): Poorly aged early 2000s wave special effects that look like they’re from a PlayStation game and casting Bob Gunton to play someone being wrong.

• What I Thought in 2000: I remember being surprised I enjoyed it as much as I did. I was also surprised by the ending since I didn’t know the true story going into seeing the film.

• What I Think in 2020: It’s even better than I remembered. Part of it is because they don’t make studio movies like this anymore where everyone seems like they know exactly what they’re doing and the whole point is to be a good story, well-told. The movie feels almost old Hollywood in 2020. The score by the late James Horner is great, too.
Posted by Patrick Bromley at 5:00 AM