Ladies Behind the Lens: STARSTRUCK 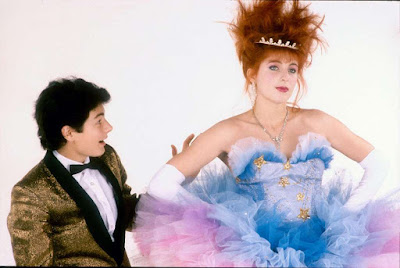 My heart is racing, I’m smiling from ear to ear, and I have this barely contained urge to jump up on my balcony railing and start singing about the “Monkey In Me.”

The reason? I just watched Gillian Armstrong’s 1982 Australian New Wave Musical Starstruck for the first time and I think it might be a contender for my top five movies of all time. Is it possible to have a heart attack from sheer joy? Because if so, I’m in real danger here, folks.

Let’s back up for a second, so I can fill you in on why I’m about to go DIY a pair of sequin shorts and raid the thrift store for '80s prom dresses. First of all, you should know that I’m obsessed with all things 80s, especially music and fashion from that era. Secondly, you probably already know I have a special place in my heart for movies directed by women. And third, I go weak in the knees for choreographed dances where bystanders join in with the main performers in dancing and shouting along to the music.

Well, this movie cracked my code on all fronts. Jo Kennedy plays Jackie Mullins, a small town girl with big dreams, bright red hair, outfits that would give Cyndi Lauper a run for her money, and confidence bigger than the Sydney Opera House. Her manager/promoter/partner in crime is her 14-year-old cousin Angus (Ross O’Donovan), a kid who gives motivational speeches and arranges publicity stunts and dresses up in giant red kangaroo costumes. These two live with their Nana (Margo Lee), a cockatoo, at least five cats, and the occasional dog above a family-run pub. Everyone in the family is supportive of Jackie’s dream of stardom, a refreshing change of pace from the frequent formula where the aspiring star’s family is skeptical and stands in the way of their kid’s dream.

The family banter includes gems like, “Oh lay off your uncle, you know he’s got a plate in his head.” “A plate? I think they threw in the knife and fork, too!” It’s all in good fun. 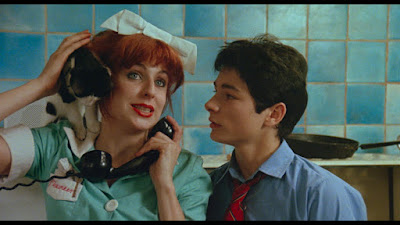 The first musical numbers occur in a club called the Lizard Lounge, all neon lights and new wave hairdos. A band called the Swingers takes the stage first, and then Jackie joins them, and the whole place erupts into the most glorious dancing you ever saw.

Some of the song and dance numbers are simpler, like the one where Jackie lays on an ironing board and mimes swimming motions while her cousin waits for his hair dye to set under a plastic cap as they listen to a surf punk tune in his bedroom. “Do you think I’m threatening?” Jackie asks Angus. “Threatening? I think you’re an old tart!” Angus declares.

Good-natured ribbing aside, Angus sets in motion a plan to make Jackie famous by placing a call to the press about a tightrope stunt. Jackie’s game for the idea, donning the most ridiculous yet wonderful outfit including a shirt with prosthetic boobs, a pair of blue fishnet stockings, a blue vinyl cap, and sequined shorts and cape. The cockamamie plan succeeds in landing Jackie a spot on a musical TV program, and we’re off to the races. 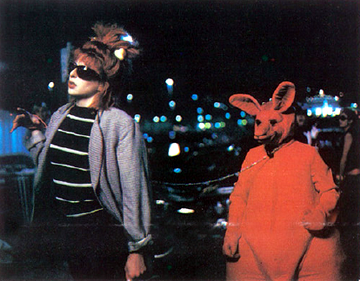 Other delightful scenes include a synchronized swimming number complete with inflatable sharks on a hotel rooftop in Sidney, a holiday party in the pub where everyone’s wearing the most wonderful hats and one woman has three different types of animal print on, and an exchange between Nana and Angus where he encourages her psychic talents by saying, “You’re sitting on a gold mine!” and she responds, “I’m sitting on an old bottom that’s beginning to resemble a squeeze box!”

Everything about this movie is so effervescent and wholesome and colorful. The songs are fantastic (written by members of New Zealand’s Split Enz), the choreography is splendid, and the costumes and production design are unforgettable. This movie may not cure your depression but it will definitely distract you from it for 105 minutes. It fully earns its triumphant ending, complete with confetti, fireworks, and slow motion applause. 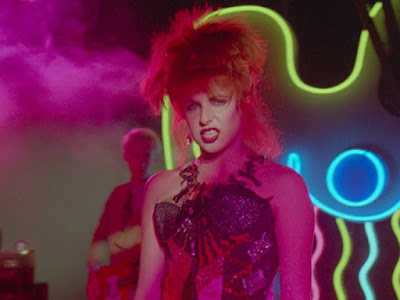 As I write this, I’m watching the movie for a second time in a row and already I’m thinking about watching it for a third time in one day and searching eBay for the poster and the soundtrack. This is what obsession looks like, and mine is incurable.

Thank you, Gillian Armstrong, for directing this joyous masterpiece; and thank you, Criterion Channel, for featuring it this summer when we could all use some irrepressible giddiness.
Posted by Patrick Bromley at 5:00 AM