Movies is Good: A MIGHTY WIND

My guess? The best of the Guests.

Christopher Guest and his various collaborators invented the mockumentary genre with This is Spinal Tap in 1984 and the films that followed in the '90s and early 2000s. Guest’s work invariably focuses on the intersection of show business and real life. Whether it’s the world of rock music, community theater, competitive dog shows, folk music, or Hollywood feature films, art meets life, and life always takes it on the jaw. As a satirist, I find Guest’s comedic point of view and moral center very consistent; I wish he made more movies. 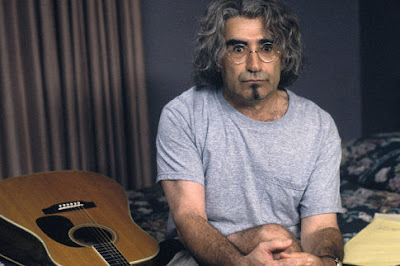 The film is subtle and clever dealing with the theme of ethnic “genuineness” vs. appropriation. The folk movement of the early '60s was largely white, middle-class kids singing and playing music associated with poor people and people of color, just as the '50s rock and roll boom involved white performers appropriating style and material from the world of Black music. I wish that one of the film’s deleted scenes, contained in the special features section on Warner Brothers’ Blu-ray disc, had been used in the actual film. During the launch party for the live concert held at Steinbloom’s elegant mansion, Jerry Palter of the Folksmen engages Bill Cobbs in a conversation about a famous blues musician. Cobbs suggests that Palter is wrong and asks him where he got his information. Ashamed, Palter admits it was a website called “Blues-A-Roo.” Whenever I glimpse Cobbs in his single scene that remains in the film, I like to think he’s playing Del Paxton, his character in That Thing You Do. That gives him extra gravitas. This running theme gives extra comedic weight to Ed Begley, Jr.’s character, Lars Olfen, who, though he admits to a brief musical career in Norway, wants nothing more than to appropriate the Yiddish slang of the show business people around him. Everybody’s appropriating! A Mighty Wind deals largely with clueless white people singing about rural poverty and urban squalor; it’s no wonder the one song that at least two of the groups in the film are famous for is “(I Never Did No) Wandering.”

My favorite part of the film (Besides the music, which is fantastic, both authentic and funny) is the way it explores the theme of what we get out of life versus what we thought we would get out of life. As the beloved Grampa in You Can’t Take It with You so succinctly puts it, “How many of us in our youth would settle for what we eventually get?” All of the music acts in the film are past their primes; they have either retired or settle for playing at noisy amusement parks and casinos where they are not the main attraction. Eugene Levy’s Mickey Cohen seems to be an outsized parody of the fabled '60s stoner lunatic (Brian Wilson by way of Syd Barret) but the script and Levy’s performance shies away from easy punchlines. Cohen is befuddled by a world he no longer understands. Although the narrative of the film places so much emphasis on a kiss that Mickey and Mitch will or will not share at the live concert, I find the most affecting moment in the film takes place before that narrative arc is resolved. With the live concert going full swing, Mitch goes for a walk outside the theater and doesn’t make it back in time. In fine A Hard Day’s Night tradition, everyone’s looking for the missing Mitch. When Mitch returns to the theater, it is with a single rose he bought from a street vendor, with which he hopes to decorate their stage as he used to in the sixties. Mitch looks at Mickey and explains, “I wanted to get a good one.” I’m not sure why, but every time I revisit this movie, that moment wrecks me. It’s like Ben Stiller telling Gene Hackman, “I’ve had a really hard year” in The Royal Tenenbaums. 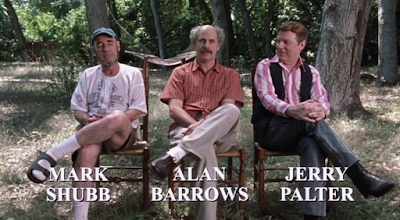 As you watch the film, notice how subtly the theme of The New Main Street Singers having morphed into a religious cult is presented. My favorite joke along these lines—and one that made me gasp the first time I saw this film—is the athletic shoes the group is seen wearing in their last scene in the film. In a television clip from their new television sitcom, The Supreme Folk, they are all wearing identical Nike sneakers, the same shoes that the Heaven’s Gate suicide cult members wore on their date with destiny in 1997. Creepy fun.

Christopher Guest, Michael McKean, and Harry Shearer did a lot of publicity for A Mighty Wind. You can spend a very pleasant afternoon watching clips on the YouTube machine of the three appearing on various shows in character as the Folksmen. Of particular interest is an appearance on The Conan O’Brien Show, where they perform their cover of the Rolling Stones’ “Start Me Up,” and an appearance on MADTV, where they perform that old sixties chestnut “Blood on the Coal.” 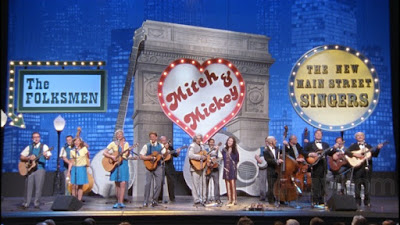 ONE THING I WONDERED WHILE WATCHING A MIGHTY WIND WAS IF THAT CLASS ACTION LAWSUIT AGAINST THE BOSE CORPORATION, CONSISTING OF PEOPLE WHO HAD BEEN HOODWINKED INTO BUYING THE SAME GODDAMNN SOUND BAR AS ME, HAD GONE FORWARD? DURING THE VERY EARLY DAYS OF 4K TELEVISION, THE FINE FUCKS AT BOSE HAD ASSURED THEIR TRUSTING CUSTOMERS THAT THE SOUNDBAR IN QUESTION FEATURED THE EXOTIC-SOUNDING BUT VERY REAL “4K PASS THROUGH.” THIS MEANT THAT IF ONE WERE USING THE SOUNDBAR AS A VIDEO SWITCHER (THAT IS LETTING THE SOUNDBAR “CONTROL” WHICH INPUT SIGNAL WAS BEING SENT TO THE 4K MONITOR) THE SOUNDBAR ITSELF WAS CAPABLE OF “PASSING” THE PURE 4K SIGNAL THROUGH WITHOUT DEGRADING IT.

LOTS OF TRUSTING SOULS (SUCKERS ALL AND I AMONG THEM) BOUGHT THIS HOOEY, WHICH LED TO ALL SORTS OF FUCKING PROBLEMS ONCE YOU ACTUALLY TRIED TO USE THE SPEAKER SYSTEM IN THE FUCKING WAY IT HAD BEEN ADVERTISED. BECAUSE THE SOUNDBAR COULD NOT (OBVIOUSLY) PASS THE 4K SIGNAL ALONG, ONE HAD TO REWIRE THE WHOLE SHOOTING MATCH SO THAT ONE HDMI CABLE WENT STRAIGHT TO THE MONITOR AND ANOTHER ONE WENT INTO THE SOUNDBAR. HOW IS THIS POSSIBLE, YOU ASK? WELL, SONY (GOD LOVE ‘EM) AND A FEW OTHER TV MONITOR MANUFACTURERS RECOGNIZED EARLY ON THAT THIS WOULD BE A PROBLEM AND STARTED PROVIDING TWO SETS OF HDMI AUDIO OUTS JUST TO FIX THIS PROBLEM. AH! BUT THERE WERE OTHER PROBLEMS TOO! BECAUSE MY SYSTEM IS “SMART,” ALL THE COMPONENTS CONNECTED WITH HDMI CABLES “TALK TO ONE ANOTHER.” THIS IS A BAD IDEA. I DO NOT WANT MY COMPONENTS TALKING TO EACH OTHER; I NEVER HAVE. WHEN I AM ASLEEP, DO THEY TALK ABOUT ME? WHENEVER I SEND THE 4K SIGNAL FROM MY 4K BLU-RAY PLAYER TO THE TV, AND I SET THE SOUNDBAR TO “BLU-RAY/DVD,” THE SOUNDBAR ACTUALLY SWITCHES ITSELF TO TV, THINKING THAT I HAVE CHOSEN THE WRONG INPUT.

I’LL LET THAT SINK IN. THE FUCKING SOUNDBAR OVERRIDES MY DIRECTION, THINKING I AM WRONG WHEN I AM NOT, AND SWITCHES ITSELF TO THE WRONG INPUT. THANKS, BOSE.

THIS LEADS TO ANOTHER PROBLEM (PARTICULARLY NOTICEABLE AND IRKSOME DURING A MIGHTY WIND) THAT WHENEVER I SWITCH TO ANOTHER CHAPTER ON A BLU-RAY, THE SOUNDBAR GOES SILENT FOR UP TO 20 SECONDS, EXPLAINING THAT IT’S “LOADING.” THAT MEANS AS I PERUSE THE MUSIC-HEAVY “DELETED SCENES” SECTION OF THIS DISC, I AM ROBBED OF THE SOUND IN EACH SEPARATE CHAPTER FOR WHAT SEEMS LIKE AN ETERNITY. THANKS, BOSE.

OH, AND ONE MORE THING! DON’T EVEN THINK OF USING THE “PLAY” BUTTON ON THE BLU-RAY REMOTE BEAUSE THAT ACTION SWITCHES THE SOUNDBAR RIGHT BACK TO “TV” AUTOMATICALLY! THAT MEANS THAT WHEN I USED TO UNPAUSE THE PLAYER USING THE “PLAY” BUTTON, THE FUCKING SOUNDBAR WOULD SWITCH INPUTS. BOY, DID THAT BEHAVIOR TAKE A LONG TIME TO UNLEARN. DID YOU KNOW THAT PRESSING “PAUSE” TWICE UNPAUSES A PLAYER? NO? NEITHER DID I UNTIL I HAD TO COME UP WITH A WORKAROUND FOR THIS CRAZY STUPID SOUNDBAR. FUCK YOU, BOSE.