What would you say if I sang out of tune?
Would you stand up and walk out on me? The Pope has written about this terrific, life-affirming film (and about the Beatles) so many times in the past, he is left wondering what else there is left to say. No less an expert than Andrew Sarris called A Hard Day’s Night “the Citizen Kane of jukebox musicals.”

The Plot in Brief: A Liverpool pop group called “the Beatles” (John Lennon, Paul McCartney, George Harrison, and Ringo Starr) are travelling to London to appear on a television special. They seem to be prisoners of their own success, confined to “a train and a room and a car and a room… and a room and a room.” Paul’s Grandfather (Wilfrid Brambell) accompanies them on the trip and causes trouble, eventually talking Ringo into leaving the group. Will all four Beatles make it to the live television broadcast? 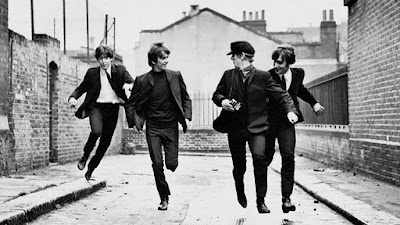 What starts out seeming like a documentary soon reveals itself to belong to a number of different genres: Director Richard Lester runs the gamut from absurdism to cinéma vérité and back again. The Pope cannot think of another musical that skips so effortlessly from style to style: it moves from sophisticated wordplay to slapstick to musical number to irony to surrealism. At times, the film seems like the work of Federico Fellini; at other times like the work of Vincente Minnelli. When Ringo, out parading, painstakingly places his camera on a rock to take a “selfie,” hits the cabled shutter release, and sends the camera flying into the Mersey river, Buster Keaton would have been proud of the way that sequence is composed, shot, and edited. 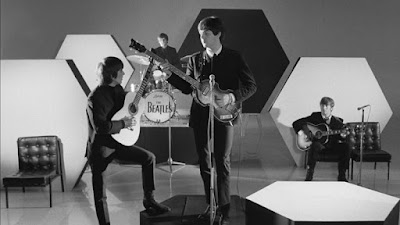 Of course, the real point is the music. It is joyous and fun. Look: the Pope is old. The Pope is old. (He shall wear the bottoms of his trousers rolled.) I just do not understand nor enjoy much of contemporary music—it’s often auto-tuned and sampled and drum-machined until the humanity is drained away. Shouting “YEE-AAH” over a sampled (and better) classic pop song is not music. Listening to modern pop music makes the Pope angry. Listening to the Beatles makes the Pope happy. In A Hard Day’s Night, the Beatles sing about how great LOVE is (“A Hard Day’s Night,” “I Should Have Known Better,” and “And I Love Her”), how one must be careful with others’ feelings (“If I Fell”), how much FUN it is to run around in an empty field (“Can’t Buy Me Love”), how much FUN it is to dance with the one you LOVE (“I’m Happy Just To Dance With You”) and just how great love TRULY is (“Tell Me Why” and “She Loves You”). The key words here are “love” and “fun.” 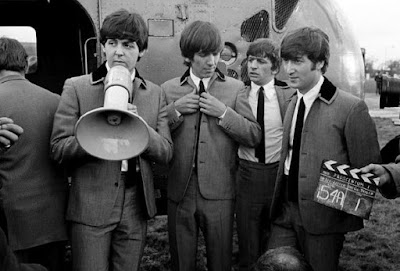 A Hard Day’s Night’s Three Miracles: The astounding screenplay from Alun Owen, which codifies the early Beatles and their language into the stuff of legend; the delirious direction of Richard Lester, so fresh, so innovative, so groundbreaking; and the performances (and dare I say, “magic?”) of the Beatles themselves—we never catch them acting.

SPECIAL NOTE: The Beatles at the Hollywood Bowl finally made its digital debut last Friday (retitled The Beatles: Live at the Hollywood Bowl) to herald the release of the new Ron Howard documentary The Beatles: Eight Days A Week—The Touring Years. I am very familiar with the original album, which I spun endlessly during my (largely) wasted youth. Producer Giles Martin (son of original Beatles producer, Sir George Martin) has done an impressive job here cleaning up the original live tapes that originally sounded like the Beatles were playing in an airplane hangar with multiple jet engines roaring, the crowd noise was so loud. The new CD/digital download sounds great. A tip o’ my Pope hat to Apple Records for finally releasing this bit of history… only 39 years after its original vinyl debut. I’m sure we can all now expect the restored Let It Be film… sometime in 2071. 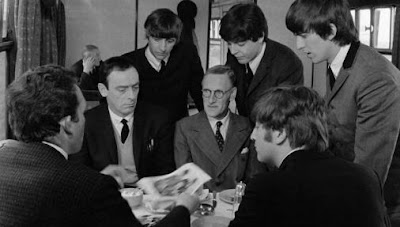 If you would like to hear the wonderful podcast the Pope and apostle Patrick recorded on A Hard Day’s Night, you can find it here.

If you would like to explore a display case the Pope designed at his day job to celebrate the 50th anniversary of the Beatles arriving in America, you can find it here.

If you would like to read about the Pope making a case for A Hard Day’s Night being one of the first manifestations of Magical Realism in English language cinema, you can find it here.

If you would like to take Doug’s magical “picture-y” tour of A Hard Day’s Night locations, you can find it here.

If you would like to read my previous column on Help!—the Beatles’ second feature film—you can find it here.

If you would like to read my previous column on Let It Be, an actual Beatles documentary that chronicles the troubled recording of that album, you can find it here.

Finally, if you still want more of the lads from Liverpool, read about another great Beatles documentary, Good Ol’ Freda, here.