Movies is Good: ATTACK OF THE CRAB MONSTERS

From the depths of the sea… A TIDAL WAVE OF TEDIUM!

No one appreciates what Scream Factory/Shout! Factory is doing for genre fans more than me. Literally. I am uniquely poised to appreciate their selection of films, their mania for securing the best transfers, and their bounty of cool supplements more than any other genre fan on the planet. Yes, it’s me. 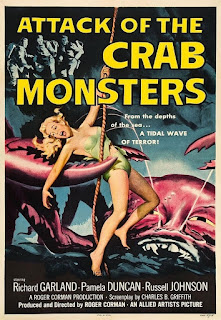 The Plot in Brief: The Navy sends a group of sailors and scientists to a remote Pacific island… to find the first group of sailors and scientists the Navy sent to the same remote Pacific island. The search party includes the usual mix of personalities found in vintage war movies (the captain, the geologist, the biologists, the handyman, and the handsome ensign) and, more importantly, the usual mix of actors found in Roger Corman productions of this type (Leslie Bradley; Richard Cutting; Mel Welles, Pamela Duncan, and Richard Garland; Russell Johnson; and Ed Nelson, respectively).

Ignoring the fact that one of the sailors in their party is decapitated upon hitting the beach, the rag-tag group of science buffs/adventure seekers press on, explore the island, and read the notes of the previous group. Our heroes soon learn those other guys were killed and eaten by giant telepathic crabs, who absorb the minds of their prey and speak in their voices. And then things get really weird… 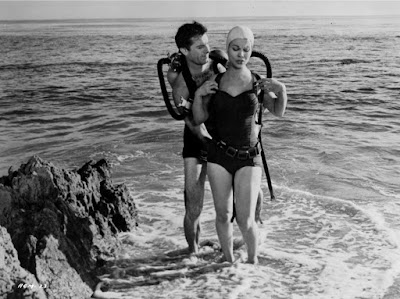 The above synopsis actually sounds like cheezy fun, but do not underestimate Corman’s ability at this early stage of his career to turn fun into forgettable, aimless melodrama. EXAMPLE: This god-forsaken movie is 63 minutes long; we don’t get a good look at the monster until at least halfway in. EXAMPLE: About halfway through, we are treated to 4 ½ minutes of mind-numbing skindiving footage that seems to have no bearing on the plot. (For those of you doing the math, that’s 7% of the film’s running time.) The film’s opening credits are 2 minutes long. (3% of the film’s running time.) There is a scene where the cast walks around the island for about five minutes. (8% of the film’s running time.) Why, with the right script, we might NOT HAVE TO SHOW the crab monster at all! This film resembles nothing so much as the “Forest Preserve Movies” my friends and I made in high school. Parents and teachers didn’t want you to film at home or school; we didn’t want to be there anyway because we didn’t want to be around parents and teachers! We budding filmmakers flocked to the Forest Preserve because it was free… and adult free. Leo Carillo Beach seems to have been Roger Corman’s Forest Preserve.

The transfer here is impeccable, advertised as a new 2K scan of a fine grain print. I’ve never seen this movie look so good, though I was used to watching it as a kid on a sketchy UHF station out of Chicago that one needed the fingers of a safecracker to even dial in. It was the same channel that used to show Women’s Roller Derby in the '70s. You know the one. So, full disclosure, my most treasured memories of Attack of the Crab Monsters involved watching it through a patina of static that made it look as if the titular crab monsters had decided to attack during a particularly pernicious hail storm. The new Blu-ray looks beautiful: sharp, and crisp with deep, rich blacks. 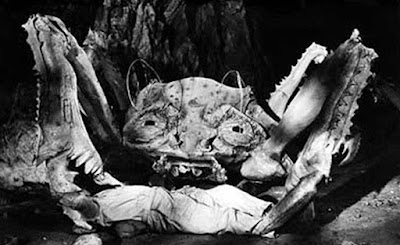 I will admit that I bought this disc for the Tom Weaver commentary. I have of late, and wherefore I know not, become addicted to the man’s dulcet tones, no nonsense attitude, and inexhaustible supply of tasty, esoteric production details. I was surprised that on this track, Weaver is joined by his frequent research assistants, John and Michael Brunas. Maybe it is simply nostalgia for the audio commentaries of days gone by, and I certainly mean no disrespect to the Bruni, but I prefer it when Weaver goes it alone.

In the interests of getting some goddamn pleasure out of this thing, I suggest the following steps be taken if you should find yourself in possession of this disc:

1) View the entire movie as Russell Johnson’s backstory. Russell Johnson appeared in a number of 50’s horror and sci-fi films (It Came from Outer Space and This Island Earth, to name but two.) before playing the role that would cement him in America’s collective consciousness: The Professor on TV’s Gilligan Island. What if Attack of the Crab Monsters was actually The Professor’s origin story? What if he used the GI Bill after this movie’s narrative to go to college… and get the degree that enabled him to teach and become “The Professor?” What if his experiences battling the crab monsters on this beach helped him to fight innumerable problems on the other beach on which he became stranded with Gilligan, the Skipper, and all the rest? What if I am slowly losing my mind?

2) Imagine how YOU would have spent that long weekend at Leo Carillo Beach. Would you have gone swimming? Surfing? Picnic lunch? Would you have gawked at Roger Corman and Company filming this risible drive-in movie? 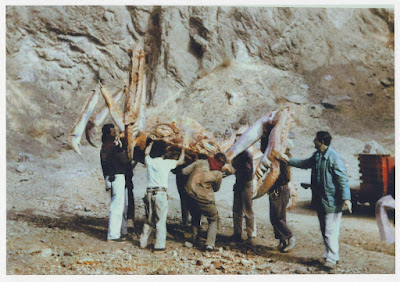 3) Try to guess of what material the crab monster is made. Fiberglass? Paper Mache? Tom Weaver suggests that Corman went to Paul Blaisdell and asked him to fabricate the monster, but Blaisdell didn’t think he could do it for what Corman wanted to pay. Imagine! Paul Blaisdell, who designed and built the laughable “Little Party Hat Alien” for Corman’s It Conquered the World, refused to build Corman a crab monster on the cheap!

4) Image a movie about the making of THIS movie. Better than this movie? You bet!

The other night, friend-of-the-site Mike Piccoli mentioned his affinity for a song that appeared on one of the Halloween CD’s I put together every fall for friends. The song in question is Roy Clark’s “Spooky Movies,” which is a bit of an obscurity. It was originally the B-side of Clark’s 1963 single “Tips of My Fingers.” “Spooky Movies,” in its own crazy way, reminds us why we are fans of these types of films and advises us to take the good with the bad. Canoodling about on the YouTube machine, I found that some enterprising genre fan had edited together an ad hoc video to accompany this great song. The video was made by “JR’s Offbeat Art” and he has made a number of them, all delightful. The following video both reminds us why we love Crab Monsters, while at the same time being more entertaining than… crab monsters. Enjoy.