As a lifelong Troma fan, I am the audience for #Shakespeare's Shitstorm, the latest effort from director (and Troma CEO) Lloyd Kaufman, making its premiere at Fantasia Fest. I grew up on The Toxic Avenger and Class of Nuke 'Em High. I dragged my best friend to a midnight show of Terror Firmer because it was my only chance (at that point) to see a Troma movie on the big screen. I bought all the movies on DVD almost as soon as I got my first player. Years later, I ventured out to the Chicago premiere of Return to Nuke 'Em High Vol. 1 and was so enthralled with it that I convinced the cast members to let me interview them in a Starbucks the next day. What I'm saying is that I come by my fandom honestly. 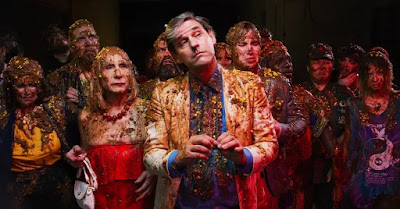 Not everyone can say the same. Troma movies aren't for everyone, and it's not necessarily for lack of trying. Some of my best friends have given their films multiple chances and have never caught the bug. I get it. Those of you with no taste for their brand of tastelessness may as well stop reading at this point, because the company's latest, #Shakespeare's Shitstorm, isn't for anyone but the devoted. This isn't going to be their crossover hit. To the contrary, this is Troma doubling down on everything they do well and everything that makes them divisive.

Their second feature-length adaptation of the Bard's work (the first being 1996's Tromeo & Juliet), #Shakespeare's Shitstorm adapts The Tempest as the story of a cruiseliner occupied by the employees of a pharmaceutical company (they manufacture something called SafeSpacia) that gets caught in a literal storm of whale shit and washes up in Tromaville. There, they encounter the scientist Prospero (Kaufman, who also plays his own sister in the film), who escaped to Tromaville in disgrace years earlier with his blind daughter Miranda (Kate McGarrigle) and has been plotting his revenge ever since. Now, with a hefty supply of whale laxatives and a new designer drug called "Tempest," Prospero's plan for vengeance is nearly complete... 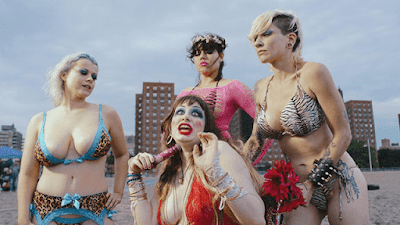 Like just about every Troma movie to come before it, #Shakespeare's Shitstorm is insane. It rises below bad taste in every conceivable way, never missing an opportunity for a lowbrow or gross-out gag. But also like every Troma movie to come before it, the movie's mind isn't only in the toilet -- it has a lot to say about contemporary America, skewering everything from capitalism run amok to (particularly) "woke" and outrage culture. It doesn't always hit its targets -- the law of averages dictates that it can't with this many shots. And while I think the film will age well in terms of documenting a specific time in our cultural and political history, not all of the messaging feels like it coming at the right time with (waves hands) all of this going on right now. Kaufman and company couldn't have known that when they were shooting the movie, but here it is and here we are. 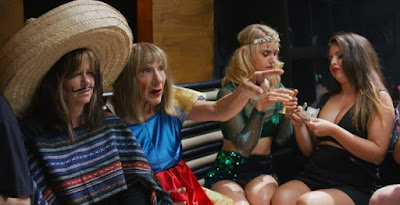 The casts have improved exponentially over the last few Troma movies, too -- the company has come a long way in the last four decades as far as acting is concerned. It's great to see Debbie Rochon back in a Troma movie, even if she isn't given a whole lot to do but clown around with Lloyd Kaufman in drag. Kate McGarrigle is a huge discovery as Prospero's blind daughter (what is it with Troma and blind characters?), scoring most of the film's biggest laughs with her inspired line deliveries and completely sincere performance. It's Kaufman himself who's the biggest revelation, though. While he's acted in the last several Troma films, his performances have usually consisted of silly mugging -- a variation of the same huckster he plays in the press and promotion of his company. As Prospero, Kaufman gets to do some honest to goodness acting, and he's quite good. It's not his funniest performance (that will always be Terror Firmer), but watching him deliver dark, emotional Shakespearean monologues while everyone around him mutates into enormous genitals is a reminder of what makes Troma great -- high and low art colliding into such a sticky mass that we can no longer tell what's good and what's bad.

Ambitious, offensive, disgusting, and frequently hilarious, Shakespeare's Shitstorm is everything a devotee like myself has come to both want and expect from a Troma movie. Using the template created by Shakespeare (who occasionally appears on screen, played by Frazer Brown) as a dramatic spine and then filling in the margins with their usual cast of colorful characters, dialogue, and outrageous gags, Lloyd Kaufman has made a film that celebrates 40 years of Troma by sometimes feeling like the company's greatest hits, other times branching out into commentary that's very much of the present. For fans of the company's output, Shakespeare's Shitstorm is another Tromasterpiece. Everyone else may want to steer clear.
Posted by Patrick Bromley at 12:00 PM