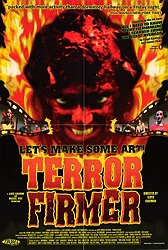 This is it. This is Lloyd Kaufman's Tromasterpiece.

I'm on record at F This Movie! as being a lifetime fan of Troma. From the first time I ever heard about The Toxic Avenger, I knew I had to seek it out. I grew up watching every Troma movie I could on USA Up All Night; when DVDs first started becoming popular, I tracked down and picked up every Troma title I could. I've read Lloyd Kaufman's memoir All I Need to Know About Filmmaking I Learned from The Toxic Avenger at least six or seven times (I've read a few other books in his Make Your Own Damn Movie series, but none as often as his first). I'm well aware that Troma's mix of graphic gore, shoddy special effects, juvenile humor, broad satire, raunchy nudity and fart jokes are not for everyone. I'm reminded of that every time most of our own writing staff at FTM says something like "Yeah, Troma movies are not for me." I understand why they put people off and do not begrudge them their disinterest or dislike. I remain, though, ever vigilant in my affection for Troma.

My favorite of all the Troma movies (and keep in mind that when I refer to "Troma movies," I'm really talking about those films produced in-house and not the hundreds of pickup titles they have distributed, the vast majority of which I have still never seen) and the one I maintain is Lloyd Kaufman's greatest achievement is 1999's Terror Firmer, a meta movie about a serial killer knocking people off on the set of a Troma movie. Kaufman plays a barely fictional version of himself, blind shlock director Larry Benjamin, who is directing the new Toxic Avenger sequel and overseeing a crew of hyper sexed oddballs while adhering to the three (real) rules of every Troma production: 1) Safety to humans 2) Safety to people's property 3) Make a good movie. His leading lady (the great Debbie Rochon) is a diva, his special effects creator Jerry (Trent Hagaa) is in love with PA Jennifer (Alyce LaTourelle), who is in love with boom operator Casey (Will Keenan of Tromeo and Juliet), a douchebag who feels like he's "above" Troma and would much rather be seeing Titanic again...for the first time. 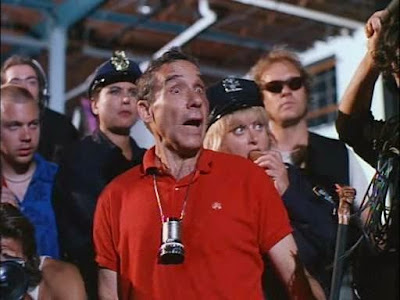 Into this madness comes a serial killer: a woman in a skin tight dress first seen pulling the leg off a guy and beating him with it and then removing the baby from a pregnant mother's womb (it's rough stuff, especially in the first five minutes of the movie). Sometimes she offs random victims -- RIP The Toddster -- but usually she's killing crew members of the Troma production. Would you believe that all of these story lines -- the making of the movie, the three-way romance AND the murders -- converge at a single point during the climax?

Terror Firmer was the first Troma movie I ever got to see in a theater; I dragged Doug to a midnight show at Chicago's Music Box theatre under an agreement that I accompany him to a terrible community college play he wanted to go see for very specific reasons (though mostly uninitiated to Troma, Doug liked Terror Firmer more than the play; we still quote it to each other to this day). I can't quite describe the thrill of seeing the classic Troma logo pop up on the big screen -- in 35mm, no less. And though the experience of seeing the movie is a very, very fond memory for me, I don't think that's why it's my favorite Troma movie (even if it doesn't hurt). It's my favorite Troma movie because it's the smartest, funniest, most self-aware and punk rock movie Lloyd Kaufman has ever made.

To the degree that we can consider some of this stuff "edgy," Terror Firmer is Troma's edgiest movie. There is violence that is genuinely disturbing and upsetting (see the earlier comment about the pregnant woman), there is an insane amount of graphic nudity both female and male, the sexuality is the most intense it's ever been (there is a love scene between Jerry and Jennifer that is a clear precursor to the one between Asta Paredes and Catherine Corcoran in Return to Nuke 'Em High Vol. 1 in the way that it's played straight, there to titillate but also to advance the characters' feelings for one another) and some of the subject matter is truly transgressive. Once upon a time, Troma felt dangerous. The movies were silly and funny and outrageous, but there was a real unpredictability to them -- you never knew what they would say or do next. And while they never fell into formula, it got to a point in the '90s where you essentially knew what to expect from a Troma film. 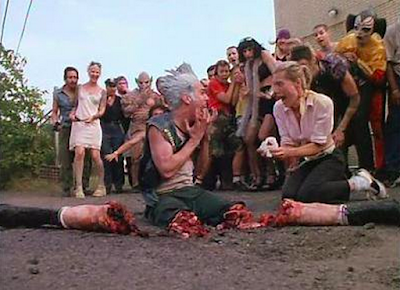 Terror Firmer delivers those things, but it does more than that, too. Kaufman's previous film, Tromeo and Juliet (co-written by James Gunn, who has gone on to bigger things) laid the groundwork for a more "sophisticated" Troma sensibility, such as it were, and material that felt less cartoonish than more recent efforts like Sgt. Kabukiman NYPD and the Toxic Avenger sequels. Terror Firmer is a much broader movie than Tromeo, but it's also much funnier while still retaining the same pitch black sensibility Gunn infused into his Shakespeare adaptation. And, since Terror Firmer is very much based on All I Need to Know About Filmmaking I Learned from the Toxic Avenger (which Gunn co-wrote), you could say he had a hand in scripting this one, too. The screenplay is actually credited to Kaufman and Patrick Cassidy, whose script is packed with jokes both low and highbrow and statements about art versus commerce. Kaufman has always fiercely believed in and supported independent film, denouncing mainstream Hollywood at any opportunity. Terror Firmer advances that ideology more explicitly than any other Troma movie.

Maybe I love Terror Firmer the most because it's such a celebration of Troma, embracing all the things that make their movies so wild and presenting an only slightly exaggerated vision of what it's like on the set of their films (for further proof of this, check out Farts of Darkness, a feature-length documentary on the making of the movie that came packaged with it on DVD and is available to watch for free on YouTube). Making any movie is very hard; making independent movies is almost impossible, as both Farts of Darkness and, to a lesser and more comic extent, Terror Firmer demonstrate. While it would have been all too easy for the movie to be congratulatory or up its own ass with "meta" nonsense, it's too busy being so bonkers violent and insane for that kind of self-satisfaction.

The main performances are a ton of fun, too. Will Keenan, who also had a hand in casting the film, is a great actor and his Casey is a perfect smug douche, representing everything wrong with filmmaking according to Troma and making us loathe him even before the final turn. Trent Haaga's performance is rougher around the edges, but that's because it's his first time acting; a lifelong Troma fan, Haaga wrote a letter to Troma begging to be killed in one of their movies and wound up auditioning a dozen times before landing the part of Jerry the obsessed Troma fan who winds up acting in a Troma movie (see what I mean about the movie being self-reflexive?). Haaga is like a younger, twitchier Steve Buscemi. Side note: since getting his start with Troma, Haaga went on to co-write Citizen Toxie: The Toxic Avenger 4 and Lloyd Kaufman's second book Make Your Own Damn Movie! and has now become a successful screenwriter, with movies like Deadgirl and Cheap Thrills to his credit. So without Terror Firmer we might not ever have Cheap Thrills. 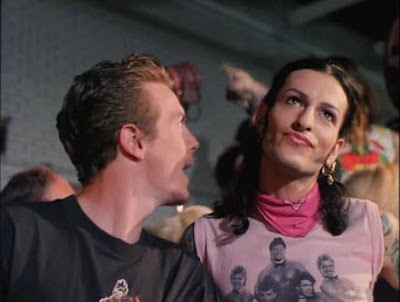 Leading lady Alyce LaTourelle is an unusual choice for a Troma movie; she's taller and more slender, more cerebral than sexual (until it's time to be sexual, at which point she delivers). Debbie Rochon is a great counterpoint, taking the piss out of every narcissistic actress she ever worked with; as always, she's funny and strong and sexy and here gets really, really put through the ringer: nose broken, peed on, you name it. But my favorite performance is from Kaufman himself, playing a blind director three years before Woody Allen did it in Hollywood Ending. Though he would take major roles in a few of the movies that followed this one, Terror Firmer marks Kaufman's first major onscreen role since 1971's The Battle of Love's Return. He's a hoot in the movie, sending up his own on-set demeanor ("I'm gonna blow my head off!") and mugging hilariously at every opportunity. My second favorite performance comes from Kaufman's young daughter Charlotte, playing his daughter in the movie, who was rendered mute after seeing her mother violently killed and whose lines consist only of "Duh!" It never stops being funny. The fact that Kaufman cast his own daughter in the part is just another example of how transgressive and wonderfully fucked up Terror Firmer is.

A bunch of familiar faces show up in cameo roles, too, including Motorhead's Lemmy, Ron Jeremy, Kerri Kenney-Silver of The State, Eli Roth, Trey Parker and Matt Stone, even future Everly director and Movie Crypt host Joe Lynch, who was working for Troma at the time and appears as an extra throughout the film. 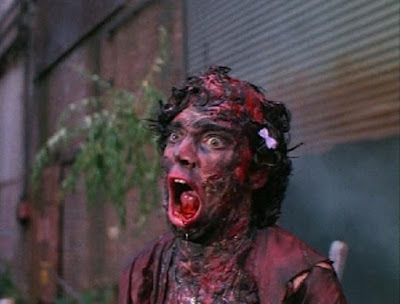 Is Terror Firmer too long? Probably. Is it repetitive? A little. Will anyone who isn't already a Troma fan find much to like in the movie? Maybe. Doug liked it! The humor is sharper and more accessible, whether it's satirizing sitcom conventions in a very funny first date sequence or making visual references to Carrie or just embracing absurdist concepts like Casey's obsession with pickling (which later winds up serving a thematic purpose). There's plenty in the movie that's funny to someone who's uninitiated with Troma, but those people might not know what to make of just how twisted so much of the movie is. It's unfortunate that Troma, a studio known for progressive ideas, falls into some of the regular traps of turning what I guess could be considered a trans character into a crazy monster, though even that has more to do with trying to shock and push buttons than advancing a worldview that rejects any gender or sexuality. Troma is a place where everyone is welcome and everyone can be made fun of.

Today is Troma Day for #Junesploitation. I suspect many of you will be watching fringe titles like Cannibal! The Musical or sticking to established classics like the original Toxic Avenger. I get it. If you're feeling adventurous and want to jump right in to Advanced Troma Studies, check out Terror Firmer. Lloyd Kaufman has made several movies for which I have a lot of affection, but Terror Firmer is his one true masterpiece -- a great Troma movie, a great comedy about independent filmmaking and a compelling enough mystery that the plot actually matters. This is Troma firing on all cylinders. Pauline Kael famously once said "Movies are so rarely great art that if we cannot appreciate great trash we have very little reason to be interested in them." Terror Firmer is the rare movie that is both great trash and great art.