Off the Shelf: GHOST SHIP (Blu-ray) 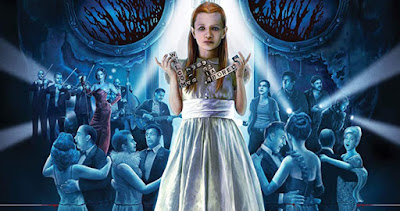 The least-loved Dark Castle remake gets the special edition treatment from Scream Factory.

Of all the Dark Castle remakes of the late 1990s and early 2000s, Ghost Ship is the only one for which I never hear any love. House on Haunted Hill and House of Wax are rightly beloved by horror fans, and even Thir13en Ghosts has found a cult audience in recent years (and recently got its own Scream Factory Blu). Ghost Ship stands alone as the remake that has yet to find a following. Minus the bravura opening sequence, regularly referred to as among the best in recent horror, the movie is otherwise dismissed as Dark Castle's also-ran. Maybe that reputation will change with this new Scream Factory disc. Then again, maybe it won't. 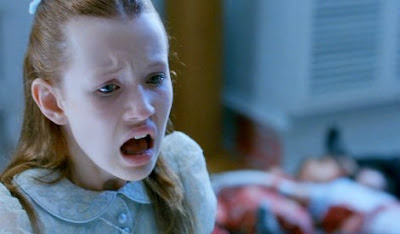 Based on the 1952 movie of the same name, Ghost Ship finds a small salvage crew (one that includes Julianna Margulies, Rod Eldard, Isaiah Washington, Karl Urban, and Gabriel Byrne as the captain) approached by a stranger (Desmond Harrington) who tells them he has found an abandoned cruise liner in the middle of the ocean and offers to cut them in on the profits. The crew agrees and finds the ship, only to discover dead bodies, a ghostly girl (Emily Browning), a whole lot of secrets about what happened aboard the ship, and possibly even their own end.

This was only my second viewing of Ghost Ship and my first in probably ten years. I was hoping my opinion on the movie would have changed with a decade of perspective. It mostly hasn't. Ghost Ship is still a frustrating viewing experience, mostly because it can't quite decide what it wants to be. I can tell that director Steve Beck wants to lean into the more suggestive, spooky brand of haunted horror, but either doubts himself or had constraints placed upon him by the producers at Dark Castle or simply the state of the genre at the time. There's really excellent evocative photography from Gale Tattersall and impressive set and production design to have the pieces in place for a haunted boat movie, but then the movie will succumb to the worst tendencies of early 2000s horror by stutter cutting or playing some nu metal (in this case Mudvayne) or go overboard with the gore. I like gore! The gore is good, in particular that memorable opening sequence in which an entire dance floor is bisected by a steel cable. It just seems to be at odds with the tone that Beck is trying to set sometimes, the way that the violence in The Fog sometimes feels out of place. The difference is that Ghost Ship never reaches the heights of The Fog in its non-gore passages; in fact, it's the violence that typically brings it to life. 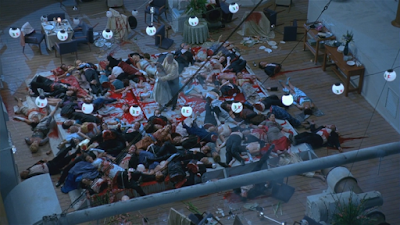 Despite the impressive ensemble, the cast is more or less wasted on parts with very little depth or characterization. The actors do what they can to energize the proceedings, but the screenplay credited to Mark Hanlon and John Pogue is more interested in using them as placeholders than developing them into believable people. We know that Gabriel Byrne is the captain and doesn't drink, until he does. We know that Isaiah Washington has a lady he wants to get back to, until he doesn't. We know that Julianna Margulies is a woman. The movie spends a great deal of time with the characters before any of them start getting killed off (it's rushed when it happens), so there was certainly plenty of time to build them up into people that we cared about. Unfortunately, it just doesn't happen. Our goodwill towards the cast goes a long way -- I'm happy to watch Karl Urban and Ron Eldard pig out on decades-old canned beans -- but there's no real emotional investment when there needs to be. The whole movie feels hollow.

Previously available on Blu-ray from Warner Bros., Ghost Ship has received a new special edition treatment from the wonderful people at Scream Factory, who continue to do the Lord's work when it comes to home video horror. The 1080p transfer from the 2009 disc has been carried over -- no 2K or 4K upgrades here -- and looks generally good, doing right by the film's excellent cinematography. The lossless 5.1 audio track is even better, offering a lot of immersive detail -- exactly the kinds of creaks and noises you might expect from a haunted boat movie. The technical merits of the disc are good, but they're also exactly the same as the version released in 2009.

Where Scream Factory has offered an upgrade is with the special features, which help paint a picture of how Ghost Ship came to be in its current form. A number of the featurettes are fairly standard EPK-style behind the scenes production shorts, but a number of new interviews with producer Gil Adler, actor Isaiah Washington, and special effects designer Jason Baird go into more detail about the making of the movie in terms of specific challenges and creative choices. The most in-depth feature is the new commentary from director Steve Beck, who had previously helmed the Thir13en Ghosts remake for Dark Castle and here wanted to do something a little different. It's a mostly technical but overall enjoyable talk. 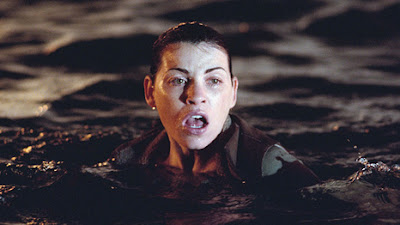 I give Ghost Ship credit for trying to do something different than the usual funhouse approach of these Dark Castle remakes. I just wish it was more successful in its attempt. Fans of the film -- or those willing to give it a second chance -- should be very happy with the package that Scream Factory has put together, as it's their usual excellent work. I'm more forgiving of the movie's flaws than I once was, but that doesn't change the fact that it's pretty deeply flawed. Even the most attractive package can't disguise that fact.