Two for One: SOUTHERN COMFORT & DOWNRANGE 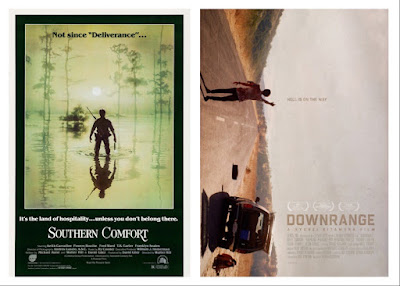 “He's dead. And I don't see what any of us can do about it. So why not play cards?” - PFC Spencer


As we prepare for Scary Movie Month here at FTM, I thought I'd lead up to the best time of the year with a couple horror-adjacent titles. As with every slasher movie where people are being hunted by the killer, I thought I'd go that same route with Walter Hill's Southern Comfort from 1973, and Ryuhei Kitamura's Downrange from 2017; two dramatic, action-thrillers that could easily qualify as horror movies (the second movie more so than the first).

We kick off this double with Southern Comfort, a movie whose perfect pairing partner would be John Carpenter's The Thing, but I have rules, people! It's a hyper-masculine movie (as most of Hill's portfolio tends to be) following a team of Louisiana National Guardsmen on a routine exercise through the bayou. When they piss off the backwoods locals by stealing their canoes and firing machine guns at them, the soldiers become the hunted. There are deeper levels to this film that makes it a damn near-masterpiece (male behavior/psyche, post-Vietnam commentary), but I'm just skimming the surface and pairing it for the fact that it's humans hunting other humans. 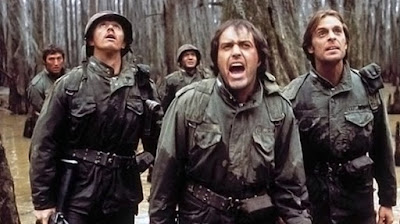 The cast is bananas, with Keith Carradine and Powers Boothe as our two leads, Fred Ward as the loose cannon, T.K. Carter as the comic relief, Alan Autry as the mentally unstable soldier, and Brion James as a one-armed, backwoods Cajun trapper. On the surface, the film explores the idea of losing one's mind while being lost in unfamiliar territory, ON TOP OF being hunted by God-only-knows-what-type-of-crazy-Cajun. As with all of Hill's work, the violence is directly descended from Sam Peckinpah's work in the '70s. It's an A+ film the goes off the rails just enough to keep you on your toes.

We follow that up with a movie that I reviewed two years ago on Letterboxd saying, “Hyper violent. Hyper stylized. Very tense. Abysmal acting. Totally recommend it.” I stand by that review. Downrange is about a group of friends on their way to a birthday party who blow a tire on the highway out in the middle of nowhere and become targets of a crazy sniper in a ghillie suit. Kitamura is a master of filming violence, so you get some gnarly images of gunshot wounds. This easily qualifies as a slasher movie because it follows most of the tropes (teens getting picked off, final girl, etc.), but it has an ending that, in my mind, is a perfect ending to a movie. If you've seen it, you know what I'm talking about. And sorry, I'm cynical I guess.

Now, before I write what I'm about to write, let me say that I enjoy Downrange. BUT... In one single movie you'll see some of the most intense action and gore you'll ever see, and then you'll catch yourself dozing off in parts. It's only 90 minutes, though, and well worth your time. Again, on the surface, these two pair simply for the fact that humans are hunting humans in each movie. 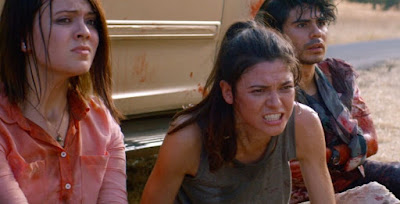 Having said that, let's explore these movies a little more. In Southern Comfort, we have men “invading” territory that doesn't belong to them. They're out of their element. Especially Boothe's character, who has just transferred to the Louisiana Guard from the Texas Guard. After a confrontation, Boothe says to Carradine, “I'm out of the habit of spending time with a bunch of gun-totin' rednecks.” Carradine responds, “You know how it is down here in 'Looosiana.' We don't carry guns. We carry ropes, RC colas, and moon pies. We're not too smart, but we have a real good time.” Just like in war, you throw a bunch of people together, some not all that stable, give them guns, send them to unfamiliar territory, and tell them to go kill. Expectation is really just hope – hope that one of these nuts doesn't just start shooting his gun all willy-nilly. Those “expectations” are completely falsified in the commanders' heads, because what in the world did you expect to happen?

In Downrange, you have a group of yuppy kids stuck in the middle of nowhere. Texas? Nebraska? Idaho? It doesn't matter. (No offense to the fine people who reside in Texas, Nebraska, and Idaho.) I live in Nebraska, where people cling to their guns like they cling to their children. Throw in the fact that there isn't much to do in flyover country, and when you see someone that doesn't look like you the first thing you do is lock your doors (or worse, grab your gun). Now, I'm sure Kitamura didn't make Downrange as a social commentary piece. It's supposed to be fun. But when you come from a part of the country that looks like it does in the film, you can't help but see some deeper similarities.

Now that I've thoroughly bummed you out, I want to reassure you that these movies are fun. They're exciting and tense. They're fun to pick apart. The performances in Southern Comfort are fabulous. The violence in Downrange is shocking. And the biggest takeaway from this double feature is: please don't hunt other human beings.
Posted by Patrick Bromley at 12:00 PM