Adam and Robyn Talk About ROALD DAHL'S THE WITCHES (2020)

by Adam Riske and Robyn Buckley 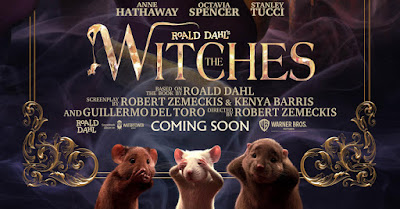 Adam: Hi Robyn! You and I both watched the update of The Witches that premiered last week on HBO Max. The new film was directed by Robert Zemeckis and stars Anne Hathaway, Octavia Spencer, Stanley Tucci, and Chris Rock. Of course, this isn’t the first film adaptation of the Dahl novel, as Nicolas Roeg directed a version of the story in 1990 starring Anjelica Huston as the leader of the world’s witches. Before we get into the new movie (and compare the 1990 film to the 2020 iteration), did you grow up as a fan of the Roeg version or were you coming to the Zemeckis film more as a regular movie experience?

I was somewhere in the middle. I’ve seen the Anjelica Huston one a few times on video and cable over the years and liked it as a kid. I revisited the film a couple of years ago and thought it was pretty good, but not a classic children’s film as I remembered it being. That version benefits from all the special effects and puppetry (done memorably by the great Jim Henson and his creature shop) and Huston’s fun, game performance. My biggest takeaway from that movie has always been soup. I remember that movie having delicious looking soup that I wanted more than even finishing the movie. It was distracting how good that soup looked and made even worse because the characters kept talking about the damn soup. 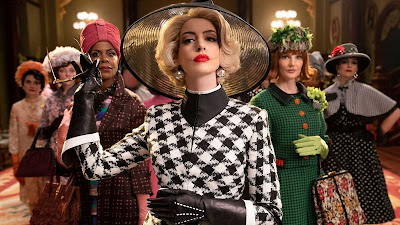 Robyn: I grew up as (and continue to be) a big fan of the original version. I have a bit of a track record on F This Movie! with The Witches, as I wrote about it for 1990 week this past March and discussed one of the scenes in the Kindertrauma episode of the podcast. Rewatching it this year, I'm still obsessed with the practical effects and I find certain parts legit creepy. That movie has some of my favorite creature designs and transformation sequences -- the part where Bruno turns into a mouse is the stuff of childhood nightmares.

My fondness for the original meant that I went into The Witches (2020) with not low expectations, but maybe some slight hesitance? Could Zemeckis capture the unhinged insanity of Roeg's work? Could Anne Hathaway (who I love) chew the scenery to pieces like Anjelica Huston had? There were things I enjoyed - Octavia Spencer was fantastic and I thought that Jahzir Bruno was a much better Luke than the original. But overall, I don't think that I really liked this new version. I felt that there was something missing as I was watching. Something that left this new movie lacking. There was something cold and fake that made it so I could never truly embrace it… it was the CGI. I'm trying to say the CGI was completely awful and took me out whenever it was used, which was constantly.

Did you enjoy the new version? What worked best for you, what didn't work at all? Why did they add a random third mouse voiced by Kristin Chenoweth?

Adam: I did like the new version. I probably enjoyed it more than anyone else I’ve talked to about it so far which is not to say I love The Witches (2020), but instead that I think the movie is entertaining. As a remake, removed from being an adaptation, I think it does what a remake should do which is have a familiar outline, but also a new attitude and feel. The Witches (1990) had a sort of outsider vibe to it. It feels free to just be a weird kids film. The new one is much more a studio product, but I think it’s good as that kind of movie. I didn’t have a problem with the visual effects but I was watching the movie on my phone so that might have had something to do with it.

The film started strongly and the interplay between Jahzir Bruno and Octavia Spencer (who’s the film’s MVP for me) was really sweet. I’m glad they gave this part of the movie space upfront because it made me care about the characters for the rest of the film which is more in a hurry than it was in the opening 15-20 minutes. Anne Hathaway (I’m a fan) is fun playing over over-the-top, which is what a part like this calls for. She’s working in the shadow of Anjelica Huston, who brought more menace to the role, but Hathaway is good in a cartoonish way that fits better with the tone of The Witches (2020). I think this is a curious Robert Zemeckis movie. It feels like a movie a less successful, younger director would make as opposed to someone who’s won an Academy Award and been at the helm of several all-time classics. I don’t see his stamp or sense of play as much as I thought I would in The Witches (2020). 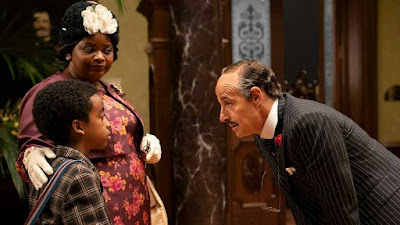 It’s funny you mention Kristin Chenoweth, because this is the movie where I finally came to terms with the fact that she fascinates me. She’s always playing characters that have some internal logic passing as wisdom that is completely foreign to everyone else. For example, I saw a trailer for a Netflix movie called Holidate and part of the preview is Chenoweth explaining Holidates like its common parlance and that everyone has at some point had designated holiday escorts to take to their family gatherings. Chenoweth knows about a whole different world than we do. She haunts and fascinates me. It’s like her voice. I kind of bristle at it but I never want her to stop talking either.

What did you think of the ending? I was like “wait, what?” I understand that the new movie sticks closer to the novel (Luke isn’t turned back into a boy and remains a mouse) but the 2020 film goes even further and we learn that Luke is now basically a general spreading propaganda to other mice about how they need to kill the world’s witches. Meanwhile, Octavia Spencer is in the background running slides (I may be misremembering that part) and helping mobilize the war effort. It’s such a bizarre way to close out the movie. We, at least I, care about Luke and his grandma. Since when is this movie about revenge against the world’s witches? It becomes Inglorious Basterds out of nowhere.

Robyn: The "let's go kill all witches" revenge fantasy is much more of an idea from the book -- there it outright states that Luke and his grandmother will both only live about 10 more years and will use that time to complete their goal. It's honestly a downer ending. It makes less sense in The Witches (2020) because we never really get the idea that they had any interest in witch hunting beyond the opening and closing scenes with Chris Rock. I'd rather the movie end on the kid mice playing on that sweet rollercoaster. Also, where were Bruno and Mary in the end scene? Are we to assume they've died of mouse old age?

Robyn: Adam, you liked this movie more than I did - but I do want to state that I didn't hate The Witches (2020) and if I didn't have such an affection for the 1990 version, this one would have been perfectly enjoyable for me. It's a totally fine movie -- I finished and immediately thought "I bet my niece would like that." To me, it's the kind of movie you can put on to watch with kids and it won't make you hate your life. The lead characters are good, the story is fun, the CGI is subpar (unless you watch on your phone). If readers have HBO Max, I would say to watch it. If you have kids, show them both versions! Give them all the kindertrauma!

Adam: Haha, well said. We’ll be back next month with some recommendations of underrated holiday movies. See you next time!
Posted by Patrick Bromley at 5:00 AM