I have come to bury Adam Sandler, not praise him.

God knows under our current Covid circumstances that any opportunity for Mom and/or Dad and/or the kids to huddle together and watch something should be applauded. I am glad, to the bottom of my black little heart, that some people this past weekend seem to have just squeezed out a good time from the latest Netflix movie that Adam Sandler just squeezed out, Hubie Halloween. I am not against fun.

But I am against anything that aims so low. The “thing” that this lazy exercise aspires to be is a holiday movie that is longer than 90 minutes and has Adam Sandler in it. The cinematographer, art director, costume designer, editor, and composer seem to be working on a labor of love... and a completely different film. Hubie Halloween looks great and gets the suburbs right: the way night looks when everyone’s front lawns are decorated, the way it looks at the drive-in when some idiot turns on their lights too early, and what trick or treating looks like to young kids. The costumes and set decorations are detailed and fun. The score is playful and fun. This film captures the look and sound of Halloween. Bravo. 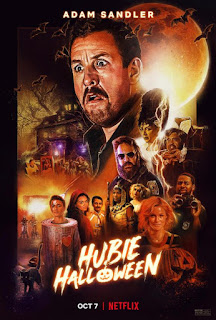 But I’m afraid that to really enjoy it, I have to watch it with my fingers in my ears and my back to the screen because this film is lazy in the way every Adam Sandler movie has been since at least Click in 2006. Good Lord! That’s fourteen years’ worth of thin scripts, obnoxious product placements, pointless and jarring celebrity cameos, phoned-in performances, and impenetrable accents. Someone on the Twitter machine this past weekend asked what people thought of Hubie Halloween and even people who otherwise enjoyed the movie tweeted that Sandler’s “Waterboy on Steroids” accent was both grating and hard to understand. I do not understand why this specific character needs to be yet another mentally deficient, baby-talking Sandler man-child.

What if the character of Hubie Dubois were just a regular guy who just took Halloween a little too seriously? That would at least leave the Julie Bowen character a little dignity because she is in love with the guy! Would that rob this movie of laughs? I think not. It’s just that between Sandler’s well-intentioned-but long-past-its-shelf-date performance and thin script, it’s ironic to think that it was Sandler’s participation that sold this project to Netflix in the first place.

FULL DISCLOSURE: There was a moment when the script was clever and actually tricked me. Just when I was beginning to complain that the Steve Buscemi character seemed to transform into a werewolf multiple times in a single night, Sandler and co-writer Tim Herlihy’s script came flying through my screening room window and whapped me on the head. “Oh, I get it!” I finally exclaimed as the script itself provided a justification for this seeming flaw. 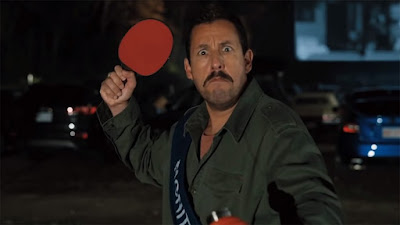 Sandler and Herlihy have here concocted a script that is both too complicated and too simple. The way the story is told makes it hard to follow; every character besides the title one seems to have been written to be played by former and current SNL performers and members of the Adam Sandler stock company. Let’s count them. In the former category we get Mikey Day, Melissa Villasenor, Kenan Thompson, Maya Rudolph, Tim Meadows, and Colin Quinn. In the latter category, we see Kevin James, Steve Bucemi, Rob Schneider (who I know was also on SNL), Allan Covert, Blake Clark, and Julie Bowen. That’s a lot of supporting roles. What this creates is a world where the viewer is not supposed to become enmeshed in the plot because the film itself constantly distracts you with cameos. Just when one settles down to consider the film’s story and inherent mystery, the film screams “Squirrel” and throws Maya Rudolph in your lap. This great multitude of thin supporting characters populate a world that exists to showcase Sandler. That’s a problem because Sandler’s accent and antics are the least entertaining aspects of the movie.

AN ANNOYING AUTOBIOGRAPHICAL PAUSE: It was great to see Julie Bowen on screen again because she figures prominently in a little trick I play when I visit the doctor, which I have been doing a lot of lately. Usually, when you visit the doctor, he inevitably asks one of his faithful minions to take your blood pressure. I have terrific blood pressure, but I also suffer from “White Coat Syndrome,” so when that over-sized cuff tightens around my arm, I am always afraid my anxiety will cause the BP reading to spike, resulting in an inaccurate test. What to do? Well, my mental sequence usually starts with the voice of Br’er Rabbit from Disney’s Song of the South, telling me that “Everybody’s got a laughing place,” but now that even Disney plans to re-theme the Splash Mountain ride in its theme parks and get rid of friend rabbit, I realize that this sound bite is racist and retrograde and needs to be stricken from my mental sequence. As that goddamn cuff tightens around my arm, I think of the “happy place” from Sandler’s previous film, Happy Gilmore. The sequence features the protagonist’s grandma winning on a slot machine, his girlfriend Julie Bowen dressed provocatively and holding two pitchers of beer, and a little person dressed as a cowboy astride a broomstick horse. Remembering this sequence makes me laugh, calms me down, and results in readings like 120/72. I am not making this up. Try it sometime. 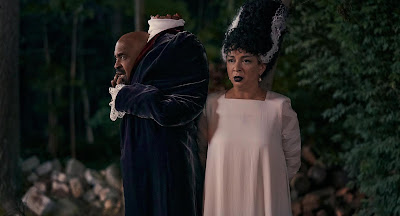 I love the setting. I love the way the film looks. I’m not a complete curmudgeon; I even liked a few of the jokes. The running gag of locals trying to bean Hubie with thrown objects as he rides his bike down the street was funny, especially when it logically extended to a pair of local bears in the woods. I like how the local school kids are willing at first to give Hubie a chance when he shows up at lunchtime to lecture them on Halloween safety. I admire that the film contains an anti-bullying message, though it’s roughly the same message conveyed more memorably by ParaNorman.

What I don’t understand or appreciate is a film that derives much of its humor from presenting an adult victim of bullying that then spends its final minutes in a protracted, explanation of why that behavior just isn’t right. This film wants to have its treats and eat them too, by playing both sides of the bully game. An obnoxious grade-schooler insults one of Julie Bowen’s foster children (Bad.) The foster child’s teacher then bullies him right back, making fun of the level at which he’s reading! (Good?) It just seems a bit confused. Maybe I’m taking this silly comedy too seriously, but it seems that when it comes to anything that has anything to do with Halloween, I come by it honestly. 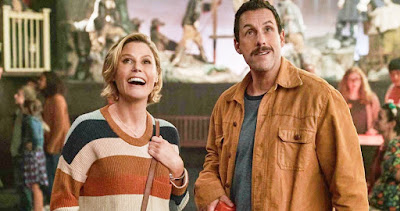 Like Hocus Pocus, I can see Hubie Halloween becoming a family Holiday tradition. I just wish it were better and deserved to be in that rarified pantheon. Hubie Halloween is at its heart a terrific Halloween film, it has everything it needs, except a story, characters, and a lead performance. With a little tweaking and snipping, this could have been one for the ages.
Posted by Patrick Bromley at 5:00 AM