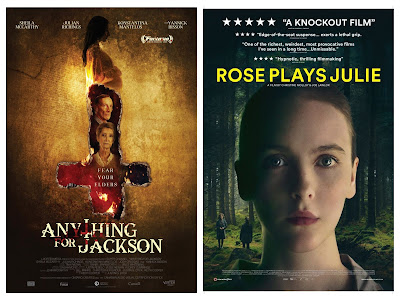 It’s often said that love transcends logic, that otherwise reasonable people can be compelled to unreasonable behavior by emotional forces they can neither understand nor control. Take the good Dr. Henry Walsh (Julian Richings) and his wife, Audrey (Sheila McCarthy), for example: They’re a straight-laced pair — austere and well-mannered. Their home is large, but it isn’t gaudy. They bicker playfully, but they never seem to argue. It’s easy to assume that the Walshes have lived the Good Life and that they’ve been rewarded with peace and fulfillment in their golden years. But it’s only seconds into Justin G. Dyck’s Anything for Jackson that we see the truth: That upstanding disposition is a cover, a compromise. Inside, the Walshes are twisted and rotting, traumatized for years now by the sudden death of their daughter and grandson (the titular Jackson). They never got over it. Time did not heal. And so they’ve made a deal with the devil — the literal devil — to bring Jackson back.

Enter the young Ms. Becker (Konstantina Mantelos), one of Dr. Walsh’s patients. She didn’t expect to get pregnant (She never even got the father’s real name, she confesses), nor has she any family to help care for the bun in her oven. No one will miss her, in other words, after she’s abducted and forced to take part in a kind of “reverse exorcism” that will imbue her unborn child with Jackson’s soul and allow him to live again. Trouble is, the Walshes are half-hearted Satanists, at best. Misguided weekend warriors. They spent their retirement fund on a spell book they can just barely read and will soon have to recruit Ian (Josh Cruddas) — a more traditionally leather-clad, headbanging Satanist — to perform the final ritual. They’re reasonable people, remember. They just want their grandson back. They’re dipping their toes into waters they cannot navigate because that’s what love is. But what happens when those waters overtake us? What happens when Becker’s love for her unborn child meets the Walshes’ dream of seeing their grandson alive? 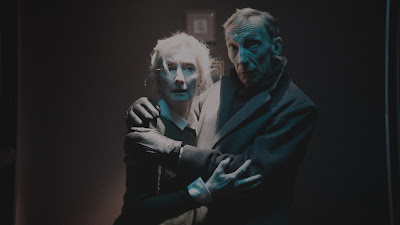 Becker’s no final girl, however, and Anything for Jackson isn’t a violent showdown with the forces of darkness. Dyck and screenwriter Keith Cooper wisely keep the narrative focused on the Walshes as they grapple with the terrifying reality of their creations. There’s some farcical comedy in two kindly old people trying to bluff police detectives and accidentally summoning ghosts (including one bone-twisting contortionist that recalls my beloved Silent Hill), but things never go slapstick. The drama is always rooted squarely in the Walshes’ pain and desperation. Richings and McCarthy deliver captivating lead performances (Both have gaunt, angular faces that lend themselves inherently to the genre’s visual language), and while we never quite agree with what they’re doing, we’re more than capable of understanding it. We know they’ve shared sleepless nights and long-since exhausted their available tears. We know they’re just weak people doing what they can to feel strong. And, really: If we’re willing to say we’d do anything for our kids, shouldn’t that include summoning the devil?

For those who prefer their demons a bit less literal, there’s Rose Plays Julie, a haunting thriller from Irish writer/directors Joe Lawlor & Christine Molloy (known professionally as Desperate Optimists). Ann Skelly plays Rose, a veterinary student who has recently discovered that she was adopted at birth. Her biological mother is Ellen (Orla Brady), a television actress of some renown. Though Rose had an objectively happy childhood and understands the privilege of her position, she cannot help but be curious about the circumstances surrounding her adoption. She cannot help but feel like the extra kid, the leftover. She mourns for a past she did not live and a future she cannot see. And so she begins tracking Ellen online, masquerading as everything from an avid fan to a prospective home buyer in order to make contact with the woman who gave her away. She soon meets her half-sister, Eva (Sadie Soverall) and learns the truth about her biological father, Peter (Aidan Gillen): Rose — born “Julie” — is the product of Ellen’s rape. 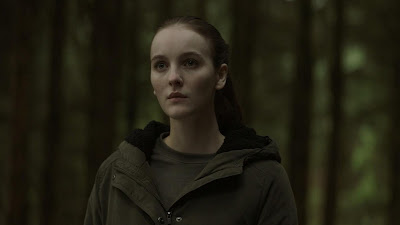 And so, as the title suggests, Rose plays Julie. In-between cow dissections and horse tranquilizations, she dons a wig and tracks her father to the site of his latest archeological dig. She approaches Peter as Julie, the actress. Her next role is that of an archeologist, she says, and she would love a little real-world experience. The smarmy Peter lights up, seeing another victim-in-waiting. But unlike her mother, Rose will be prepared. It’s here that the film’s powerful metaphors come into focus — Rose is playing a part, like her mother would. She has her father’s talent for archeology, too, digging up the past and putting it in context. Her veterinary training prepares her for the brutality of death and challenges her to find mercy in the act of killing. This isn’t just Rose’s story, though. The more that her daughter pulls on the threads of her former life, the more Ellen is compelled to face the pain she’s tried to forget. Together, mother and daughter resolve to rekindle their lost bond and settle their long-dormant family business.

The performances here are extraordinary, specifically Ann Skelly’s delicate and powerful turn as Rose. There’s a steeliness to the character that separates her from other young protagonists in dramas of this kind. She’s no babe in the woods. She’s not driven to uncontrollable rage or pushed past a point of no return. She’s contemplative, self-assured. She never loses herself. Her search for closure is less an aimless groping for identity than it is a bold expression of the power already alive inside her. Aidan Gillen (who seems to now revel in scumbag roles after The Wire and Game of Thrones) threads a very difficult needle by playing Peter both dangerous and pathetic. His play-acted seduction gives way to play-acted remorse; neither is genuine, and he is incapable of living life as anything but a predator. His final scene with Orla Brady — in which she delivers the film’s strongest dramatic punches — embodies Rose Plays Julie’s urgent examination of identity, catharsis, and acceptance.
Posted by Patrick Bromley at 12:00 PM