Off the Shelf: SCARE PACKAGE (Blu-ray)

One of the year's most entertaining horror anthologies comes to Blu-ray!

I've found myself pushing back against the word "fun" when it comes to describing horror movies in recent years. It's not that the word is bad or that anyone is wrong for having fun with a movie, it's just that I feel like it's sometimes a discussion stopper. It's the word one falls back on when there might be nothing else to say. Case in point: I remember watching an episode of The Last Drive In on which host Joe Bob Briggs gave a detailed explanation as to why he didn't think a movie worked on its intended terms. His co-host Darcy the Mail Girl (Diana Prince) responded "It's fun." Just like that, the conversation was over. There's no arguing with fun.

I say this because Scare Package, the horror anthology from directors Emily Hagins (Grow Up, Tony Phillips), Aaron B. Koontz (The Pale Door), actor Noah Segan (Looper), Courtney and Hillary Andujar, Anthony Cousins, Baron Vaughn, and Chris McInroy, is fun. There's just no other better word to describe it. It's a horror comedy that definitely leads with the comedy, so those looking for something actually scary will want to go searching somewhere else. As a comedy with major horror elements, though, it's very entertaining and, yes, fun. It's a good time of a movie, celebrating the tropes of horror with copious amounts of blood and gore. As with most anthologies, it's uneven; it starts and ends strong, but sags in the center with a couple of segments that didn't work as well for me as the ones that surround them. Like a few recent anthologies (namely V/H/S and Tales of Halloween), it kicks off (after the beyond meta cold open) with its best segment and never fully recovers -- but what a segment it is. "One Time In the Woods" is worth the price of the Blu-ray alone. 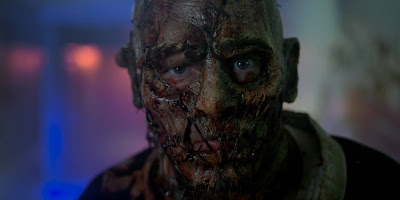 Here's the plot summary from the movie's press release:
In SCARE PACKAGE, Chad Buckley is a lonely Horror aficionado, spending his days overseeing a struggling video store and arguing with his only customer, Sam. When an unsuspecting job applicant arrives, Chad sets out to teach him the rules of Horror; weaving in and out of hilarious segments geared toward the ropes and tropes of terror.
Originally debuting on Shudder, Scare Package has now been released on Blu-ray by RLJ Entertainment. The coolest bonus feature included is the film's episode of The Last-Drive In, the Shudder series hosted by Joe Bob Briggs, who cameos in the very funny final segment of the film, an extension of the video store wraparound. There's a rightfully deleted sequence called "Locker Room Z," about a women's locker room overrun by zombies, and an alternate ending that's bloody but lacks the punch of the theatrical version. Also included is an appreciative and technical commentary from producer Cameron Burns and producer/writer/director Aaron B. Koontz, who made the wraparound and the final segment and who, between this movie and The Pale Door, is having a heck of a 2020. All of the bonus features make for a pretty excellent disc, very much in the spirit of the film itself.

More from the press release:
RLJE Films, a business unit of AMC Networks, has picked up select rights to SCARE PACKAGE, from Shudder, AMC Networks’ streaming service for horror, thriller and the supernatural. SCARE PACKAGE releases on VOD, Digital HD, DVD and Blu-ray on October 20, 2020. The horror comedy stars Jeremy King (The Pale Door), Noah Segan (Knives Out), Toni Trucks (“SEAL Team”), Chase Williamson (The Guest), Baron Vaughn (“Grace and Frankie”) and Joe Bob Briggs (“The Last Drive-In with Joe Bob Briggs”). RLJE Films will release SCARE PACKAGE on DVD for an SRP of $27.97 and on Blu-ray for an SRP of $28.96. 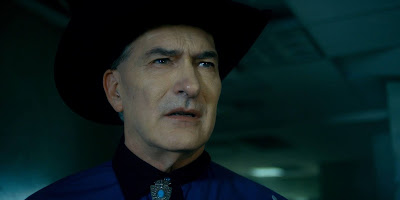 SCARE PACKAGE was created by Aaron B. Koontz and Cameron Burns of Paper Street Pictures and is directed by Emily Hagins (My Sucky Teen Romance), Chris McInroy (Death Metal), Noah Segan (Knives Out), Courtney and Hillary Andujar (production design on The Wind), Anthony Cousins (The Bloody Ballad of Squirt Reynolds), Baron Vaughn (“Grace and Frankie”) and Koontz (The Pale Door) who all co-wrote the film with Frank Garcia-Hejl (“Ramsey Has a Time Machine”), Ben Fee (Missio: I See You) and John Karsko (After Dark).

These releases contain extensive bonus features including a Creators Commentary track with creators Aaron B. Koontz and Cameron Burns, bonus segment "Locker Room Z, "The SCARE PACKAGE Blooper Reel, Rad Chad's Rad Ad, and the Original Not-As-Good Ending. And for the first time ever on a physical medium, the SCARE PACKAGE episode of Shudder’s The Last Drive-In with Joe Bob Briggs is available exclusively on the Blu-ray.

Check out the trailer:

Bonus features on the Blu-ray include all of the above, as well as:
• The Last Drive-In with Joe Bob Briggs: SCARE PACKAGE Episode