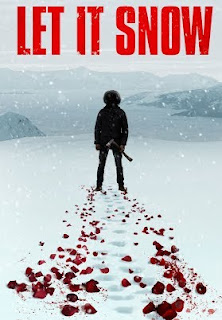 The Box is back, but spookier!

I’m going to cut to the chase on this one, folks. You’re busy. You’ve got scary movies to watch. You’ve got seven-word reviews to write. I don’t want to take up too much of your time. So, here goes: Stanislav Kapralov’s snowbound slasher Let It Snow isn’t worth your eighty-three minutes. It’s bland, tedious, and almost entirely devoid of the gooey guts and gore we come to expect during #ScaryMovieMonth. It’s about a pair of blandly attractive American slices of white bread (Ivanna Saknho as Mia and Alex Hafner as Max) who travel to Georgia (country, not state) hoping to take on the baddest slopes any semi-professional snowboarder could possibly ask for. They’re thrill-seekers in love, you see, and Max just won’t feel like a Real Man until he gets down on one knee at the summit of Devil’s Nards, or whatever the hell they call the big mountain. The film’s early beats are a dull, over-directed collage of sex scenes and landscapes. The action doesn’t start until the middle bits, once Mr. and Mrs. MAGA hit the slopes and become the target of a masked killer who stalks Devil’s Nards in search of fresh tourists 1they can knock off precarious cliffs. 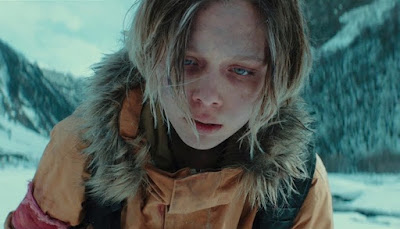 Devil’s Nards is haunted, you see. A young girl was killed there years ago, left to die by tourists and interlopers who didn’t want to get wrapped up in a murder case. Since then, anyone who scales those cursed peaks ends up in a body bag. Is it her ghost? A vengeful relative? A random good samaritan? No one knows. The locals warn Mia and Max, of course. Max laughs off the threat while running his fingers through his gorgeous, Nordic locks. Nature will not contain his raw masculinity, he insists. He’s competed professionally! He’s tamed his share of snowy beasts, and he’s more than willing to put his would-be financée in harm’s way for his own glorification. “Creepy hotel receptionist’s warnings be damned,” he exclaims. “I’m renting a helicopter!” Anyway, all this rigamarole amounts to about forty-five seconds of snowboarding footage that of-fucking-course ends with the couple (who, again, I cannot scientifically confirm are not siblings) getting separated and forced to fend for themselves in a winter wonderland of horrors.

Make that would-be horrors, I guess. This may be the only slasher in history with — Let me check my notes — no actual on-screen murders. There’s a body or two laid out in the early expository moments, but there are literally zero instances of dramatic tension that give way to the aforementioned slasher doing anything that resembles slashing. It’s bold, in a way. Right? It’s almost postmodern. I will say this in defense Let It Snow, though: Co-writer/director Kapralov really, really wants it to be a movie. Despite the absence of observable emotional range in his lead performances, Kapralov shoots the film with a kind of graceful, European staccato that makes its proceedings feel more profound than they actually are. Had it anything on its mind, we might have called the film “meditative” or “introspective.” There are emotional beats, of course — mostly beats that involve a kindly grandpa who lives in a secluded cabin — but they fail to create real drama because we simply cannot not care less about the jar of marshmallow fluff we’ve been boondoggled into accepting as a protagonist. 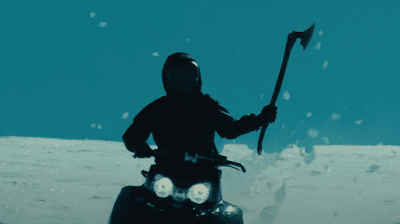 So, no. Despite my best efforts, I cannot recommend Let It Snow. I mean, that’s fine, right? This is the first you’re hearing of it. It’s no skin off your teeth. But, here’s a twist: I’ll totally watch Stanislav Kapralov’s next movie. He’s a good director! He almost made me believe that a sleeve of string cheese could carry a major motion picture. He shot the hell out of those mountains. He also created some interesting visual contrasts that, again, would have been provocative had they contributed to conflict or characterization. Or, you know, scares. Wow, there was really nothing scary about Let It Snow. That’s wild. Not even an attempt. Like, momentary creeping dread, sure, but not a single scare. Or —*checks notes again* — any murders. Man, is this a secret masterpiece? No, of course not. That’s just #ScaryMovieMonth talking. We’re inclined to love everything in October, aren’t we? We’re just so happy to be here. Well, Let It Snow isn’t worth risking that positive mindset. It won’t insult your intelligence, but you won’t remember a single thing about it once it’s over. It’s all just snowflakes on...a mountaintop, I guess. I don’t know. I tried.
Posted by Patrick Bromley at 12:00 PM