Two for One: ABBOTT & COSTELLO MEET FRANKENSTEIN & THE GHOST AND MR. CHICKEN 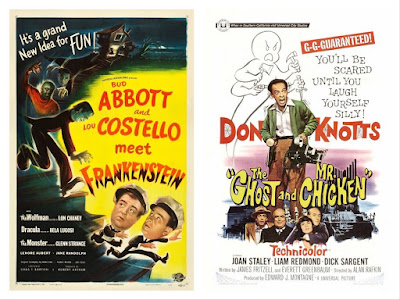 “The next time I tell you that I saw something when I saw it, you believe me that I saw it!” - Wilbur Grey

There are countless things for which I am thankful. As someone who is obsessed with movies, though, I'm grateful for two boys – Eben (8) and Rowen (2) – who like watching all types of movies. We've had a philosophy that if we teach Eben to look at entertainment not just as something for the audience to enjoy, but also as a thing human beings actually created, he may enjoy that piece of entertainment more. He's been watching horror movies since he was four years old, and as each year passes we become more adventurous with what we show him. I love introducing him to things his peers probably aren't watching. Romero's Night of the Living Dead, for example. Eben really wanted to watch The Walking Dead, so we showed him the pilot and explained how the half-zombie crawling in the grass was made, and that the makeup process for these people can take several hours. After that I thought he should see where this all began, so we turned on Romero's masterpiece. It was his first black and white movie and he loved it.

Because of that I knew he'd be down for just about anything. I wasn't proud just because he was watching a horror movie, but because it was an “old” movie. So many people (not just kids) are so averse to watching older movies and that just breaks my heart. When I was thinking of my next double I knew I wanted Alan Rafkin's The Ghost and Mr. Chicken but I couldn't think of another movie or a theme of the double. And then it hit me: kids watching old movies! 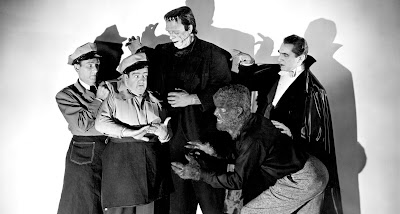 We start the night off with Charles Barton's Abbott and Costello Meet Frankenstein from 1948. I'd never seen an Abbott and Costello movie/clip/gag, but I liked Laurel & Hardy, Marx Brothers, and (some) The Three Stooges. I've come to realize, though, that if you're not raised on that kind of comedy you're probably not going to like it as an adult. Luckily, I don't have to sell Eben on anything. He trusts that I'm going to show him something (at the very least) interesting. The movie follows Wilbur (Costello) and Chick (Abbott) as two package handlers who are tasked with delivering Dracula's coffin and the remains of Frankenstein's monster to a roadside attraction. As it turns out, Dracula (Bela Lugosi) is alive and wants to repair the monster (Glenn Strange) to do his bidding. He “instills” the help of Wilbur's girlfriend to do the procedure, and later, during a costume ball, hijinks ensue. With the help of The Wolf Man (Lon Chaney Jr.), Wilbur and Chick try to foil Dracula's plans.

I'm happy to report that Eben and I were in stitches the whole time. Getting a child to sit down to watch a movie void of color is a difficult task. The trick is making sure there's something that will pique their interest. For instance, NOTLD was easy. “Hey Eben. Wanna watch a zombie movie?” “Yeah!” “Just so you know, it's black and white.” “ZOMBIES!” When A&CMF started and it was obviously black and white, Eben didn't even flinch. He'd seen black and white movies. He's liked lots of them. Throughout the film he'd comment on the gags (Wilbur wobbling on top of the upright coffin, the chase sequence through the different rooms) or the transformations (Dracula's is animated, which we thought was really cool). Hearing him talk about that type of stuff brought me so much joy. 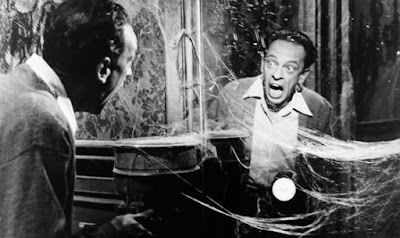 You follow up Abbott and Costello with human cartoon Don Knotts in The Ghost and Mr. Chicken from 1966. This one doesn't contain nearly the amount of comedy A&CMF does, but Knotts is a character kids love to see. Eben saw this when he was six, and while he liked it, I think he was a just a little too young for it then. The comedy is subtler and it's a little slower, but it'd be a perfect movie to show a child of 8, 9, or 10. The story is about Luther Heggs, a typesetter who dreams of becoming a reporter for the newspaper. After being cajoled by the custodian, Luther gets the gig of staying the night at the local murder house in hopes of saving it from demolition. It's basically a live-action Scooby-Doo episode, and it is so fun. Don Knotts seemed like a staple of my childhood through reruns of The Andy Griffith Show, Scooby-Doo, and Three's Company. He was always a comforting presence to see on the television, and I was happy to try and give Eben that same experience. Maybe after Scary Movie Month we'll dive into Herbie and the Apple Dumpling Gang movies.

Kids or no kids: watch older movies. If you're reading this site, though, you probably already do. Good job! If you have children, get them into older movies as soon as you can. I suggest either goofy comedies or light, spooky fare. Find something they'll find interesting for 60-90 minutes. And if you're worried about getting your kids into horror movies, use your best judgement. I realize most parents aren't watching Child's Play with their seven-year-olds, but explain to them how the doll was made or that the blood on screen tastes like sugar. After they grasp the concept of movie-making, then move them into Bergman and Fellini.
Posted by Patrick Bromley at 5:00 AM

Email ThisBlogThis!Share to TwitterShare to FacebookShare to Pinterest
Labels: abbott and costello meet frankenstein, don knotts, double features, the ghost and mr. chicken, two for one