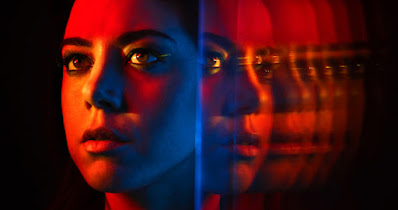 Spoilers: Bear has only a brief cameo.

Who’s ready to get their high-concept, intertextual tragicomedy on? Black Bear! Here we go: When indie filmmaker Allison (Aubrey Plaza) takes a working weekend excursion to a secluded mountain hideaway, she hopes to knock out the cobwebs and craft the next Great American Epic. Little does she know, however, that the hideaway in question belongs to Gabe and Blair (Christopher Abbott and Sarah Gadon), a pregnant couple teetering on the edge of implosion. Gabe’s the scruffy musician. Blair’s the ball-and-chain. Allison goes for lots of swims and frequently has no pants. You see where this is going. Black Bear takes its time, though, guiding its initial premise to its inevitable conclusion along a path that’s both entirely predictable and disarmingly subversive. Plaza plays her patented Fuck Off sardonics as alluringly as possible, taking Gabe’s side in petty squabbles and drinking just enough that her loose lips make Blair uncomfortable. Still, while there’s enough here to make for an intimate, sexy thriller, we can’t help but feel like we’ve seen this all before. 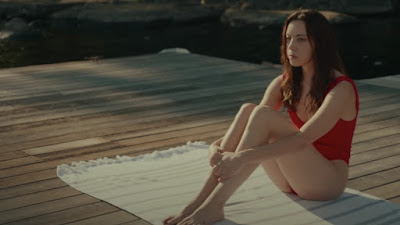 And then, thankfully, we take a turn. A frightening accident gives way to a second-act reset. Suddenly, the secluded mountain hideaway is a bustling film set crawling with grips, PAs, and costume designers. Gabe is now the director. Allison is now his wife and leading lady, a fading ingenue who spends most of her work day half in the bag. Now it’s Blair who Gabe flirts with; he’s playing the frustrated auteur and she’s loving the opportunity to manipulate Allison just enough so that she’ll come to the self-evident conclusion shared by everyone on Gabe’s set: She’s a drunk. She doesn’t deserve this man. Her continued participation in his life and work is a toxic indulgence that he’s just waiting for the right moment to shed. We soon realize that we’re along for the ride as Allison tries to navigate the worst night of her life, a reframed and intensified variant on Black Bear’s opening act. It’s a tricky needle to thread — create a new context for the original dramatic arc that simultaneously acts as a running commentary on the interpersonal dynamics that spawned the original conflict.

We’re doing cognitive backflips here, folks, and none of you would be blamed for drawing a suspiciously-strong throughline back to David Lynch’s Mulholland Drive. Lynch’s magnum opus is an influence, for sure; We’re all actors in starring roles. Our conflicts are copy, fodder for some hot director’s newest melodrama. Those sufficiently schooled in surrealism will find nothing revelatory about Black Bear, but that doesn’t make it a fruitless exercise. Abbott is particularly good in the Gaslighting Male part, and Plaza shows more than a few flashes of greatness through her intrinsic vulnerability and naturalism. She’s one of our next great Dames, mixing the inner strength of a Katharine Hepburn with the aloofness of a Helena Bonham Carter. Black Bear doesn’t entirely work, in the end, but the Parks and Recreation alum needs to keep flexing her creative muscle in these kinds of projects. Plaza is best when she’s given long takes to feel out her space and play the layers inherent in quality characters. Her best performance is still ahead of her, but this is one hell of a start. 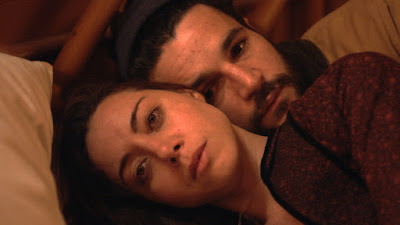 If there’s a frustrating element to Black Bear, though, it’s that the narrative’s Möbius strip construction seems designed only to reinforce a sense of cynical hopelessness. Whereas Mulholland Drive’s final half hour acts as a kind of Rosetta Stone for unlocking the dream landscape laid out before — and thus allowing us to draw meaning and inspiration from what we’ve seen — Black Bear seems to revel in its own lack of catharsis. It feels determined to damn the creative process as self-indulgent sociopathy, to insist that we’re doomed to repeat our characters’ mistakes and that the interpersonal relationships we share could never go deeper than performative exercises. The loop will never end. We’re all just flints to each other’s emotional trash fires. And, hey, that’s all fine. It’s hardly a new thesis, and the film does more than enough to ratchet up the paranoia and intensity necessary to sell it. The strike against Black Bear is not in its view of romance, creativity, or ambition; it’s in its insistence that we’re helpless to learn or grow from those pursuits.

Black Bear is available on VOD platforms on December 4th.
Posted by Patrick Bromley at 5:00 AM