Two for One: HOME FOR THE HOLIDAYS & THE MEYEROWITZ STORIES 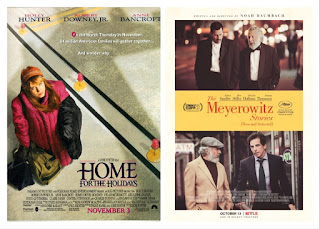 “You guys will never understand what it's like to be me in this family.” - Jean Meyerowitz

After October I always seem to turn to dramadies, heavier movies, and more specifically, dysfunctional family movies. While the holidays have always been a time of joy for me and my family in my 38 years on this planet, I know it's not that way for millions of people. And for some reason I've always been fascinated by those stories. Isn't that why many of us turn to movies? We want to see a world different than our own. We want to hear stories of people who are nothing like us, and a lot of the time, complete opposites of who we are.

Enter the family drama. The older I get the more I've come to realize my story is quite uncommon. My parents were happily married until my father passed away, the four of us had always been really close, and other than the usual peculiarities, there're no neuroses to speak of. I hope as my sons get older they get to experience the same kind of family life, but I'm not ruling out bouts of neurotic behavior in the future as the world around us is constantly changing.

For this double I've turned to two families that are the complete opposite of what I grew up with. We start things off with the Larsons of Baltimore in Jodie Foster's Home for the Holidays. The film stars Holly Hunter as Claudia, a recently-fired, single mother who lives in Chicago. She's flying back to Baltimore to have Thanksgiving with her parents (Charles Durning and Anne Bancroft), her aunt (Geraldine Chaplin), and her sister and her husband (Cynthia Stevenson and Steve Guttenberg). The only person who could make this weekend bearable, her brother (Robert Downey Jr.), isn't coming. To make things worse, Claudia's teenage daughter (Claire Danes) is staying back in Chicago to have sex with her boyfriend. Between the cast and this bare-bones setup, this is exactly the type of movie I'm in the mood for every November. 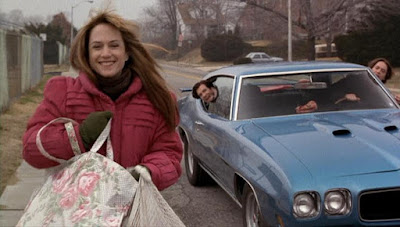 There is something unique to this film that I've never been able to put a finger on. I don't know if it's Foster's direction, W.D. Richter's script, or the fabulous performances, but the movie feels very heavy for how funny it is. Again, this is exactly what I'm looking for this time of year, but the heaviness of the film makes it seem more authentic. When RDJ does show up (SPOILERS), he adds a manic element to the story that, on top of the neurotic behavior of Bancroft, the delusions of Chaplin, and the spitefulness of Stevenson, adds even more weight to the story. (Thanks, cocaine!) But then there's a romantic element that comes into play with Dylan McDermott that is unrealistic enough to throw everything off-kilter (in a good way). Let's say you're having a dream: a romantic, candle-lit dinner; the person of your dreams; you lean in for a kiss. KNOCK! KNOCK! Your mother and father walk in telling you about these new wool socks they just bought, and how your high school sweetheart is the head of an advertising firm in the city. And there's young RDJ doing blow in the corner and screaming out the window. That's Home for the Holidays and it's perfect.

We then head north to New York to spend time with the Meyerowitz family in Noah Baumbach's The Meyerowitz Stories (New and Selected). Not unlike the Larsons from before, the Meyerowitzes are spread out all over the country and are re-united at their childhood home. But unlike the Larsons, none of these people are what you'd call “pleasant.” The family is headed by Harold and his wife Maureen (Dustin Hoffman and Emma Thompson). Harold's three children are Danny (Adam Sandler), Jean (Elizabeth Marvel), and Matthew (Ben Stiller). All three siblings have their own hang-ups, and they all lead back to their father. Harold has an accident and ends up in the hospital and the kids are forced to come together to get family affairs in order. 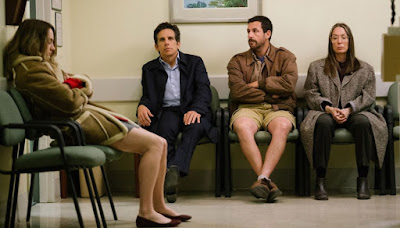 I love Baumbach because I love neurotic New Yorker stories. Stiller is doing Stiller here, and Sandler is thankfully playing his role straight. It's Hoffman, Thompson, and especially Marvel who really shine, though. Harold Meyerowitz is an artist who tasted minor fame in his younger years when he taught at Bard. He's never been a present father because his mind has always been wrapped up in his art. It's the perfect example of what most of us fear as parents. We're afraid if we aren't there enough for our kids they'll want to run away as soon as they're old enough and we'll never see them again. Harold's kids never lived up to his expectations and that what most of us fear(ed) as (grown) children. This is a running theme in nearly all of Baumbach's pictures because this was the family in which he grew up. Again, I experience these things, but not to the level we're shown in his movies. But it's something with which we all connect because... we're human.

There aren't many “great” dysfunctional family movies, but I think these are two examples. They're movies that don't quite fit into my established double feature rules, but they make me feel how I want to feel during this time of year.
Posted by Patrick Bromley at 5:00 AM

Email ThisBlogThis!Share to TwitterShare to FacebookShare to Pinterest
Labels: double features, dysfunctional family movies, home for the holidays, noah baumbach, the meyerowitz stories, two for one