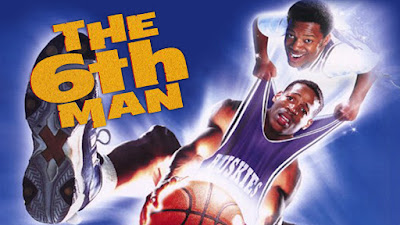 The review duo who question Disney’s blanket acceptance of cheating in sports movies.

Rob: Baseball season is over, so it’s time for a new series! The premise is simple: We choose a year and talk about its one-hundredth highest-grossing (domestic) film. We’re calling it “Hundos.” First up is 1997’s The 6th Man, starring Marlon Wayans and Kadeem Hardison as brothers and college basketball All-Stars riding the fast track to NBA glory. But when Antoine (Hardison) is suddenly stricken with a fatal heart attack mid-game, Tyler (Wayans) — along with Coach Pederson (David Paymer) and sportswriter/love interest R.C. St. John (Michael Michele) — fears that his career might be over before it started. Just when all seems lost, though — twist! Antoine’s re-animated spirit is back and ready to help Tyler make this the best season ever.

Rob: It sure is. Anthropologists hoping to understand 1997 should look no further than The 6th Man. Its production aesthetic, comic sensibilities, fashions, R&B soundtrack, and all-around vibe just scream late ‘90s mall movie. That’s both a good and a bad thing, I guess. The 6th Man takes a leisurely approach to its storytelling (It’s about forty minutes before Antoine re-appears, not to mention an hour before Kevin Dunn shows up), but it’s so overstuffed with tonal shifts and random gags that I eventually just threw up my hands, gave up worrying about cohesion, and tried to appreciate the experience. It’s such a weird movie. It’s both predictable and inscrutable. It poses a thousand unanswered questions about paranormal metaphysics. It’s a nice enough star vehicle for Marlon Wayans, though, and it showcases nearly every “What if you were the only one who could see the ghost?” comedy premise imaginable.

What did you think of The 6th Man? What the hell is going on with the courtside announcers in this movie? 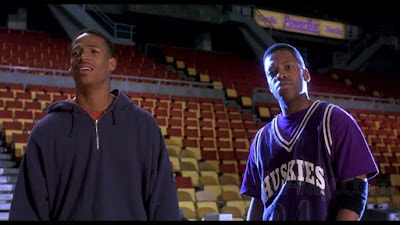 Adam: The courtside announcers felt like they were submitting a reel to SportsCenter. It’s odd that the movie not only features courtside announcers but also prominent roles for the beat reporters. By the way, is R.C. St. John supposed to be a student journalist or a professional sports journalist? Either way, I’m pretty sure the beat reporter isn’t supposed to be dating a player on the basketball team their job is to cover. I don’t know, ethics and such. It’s also super weird that The 6th Man has a plot thread where Kevin Dunn (who I guess is the alpha beat reporter for the same outlet as R.C. St. John?) is trying to get Michael Michele to date Marlon Wayans in order to get dirt on the team. It’s even weirder that Dunn is such a creep (in the limited amount of screen time he has) that it puts the audience in the position to root for cheating to not be uncovered. I really don’t get why Disney sports films are so pro-cheating as long as the cheating stops before the championship game. They did this in their Angels in the Outfield remake and it’s repeated in The 6th Man. Just because you stop doesn’t negate how you got there, fellas.

I wasn’t sure if I had seen The 6th Man before I sat down and watched it last night. It turns out this was my first viewing and I agree especially with your point about the tonal shifts. When the film goes for comedy, it’s more admirable than funny and that’s all because of Marlon Wayans, who succeeds at physical comedy. It’s interesting to see Kadeem Hardison cast as the cooler guy of the two because my history with him in movies like White Men Can’t Jump or on TV’s A Different World was as the likable nerd or sidekick. I liked Hardison in The 6th Man, but the movie takes a weird turn in the third act where it makes sure you know that Antoine was/is still a jerk and that he’s responsible for holding Marlon Wayans’ character back in life and sports. The movie might have worked better as a Ghost-like drama and not a movie with an A1 Steak Sauce-centric comedic set-piece. 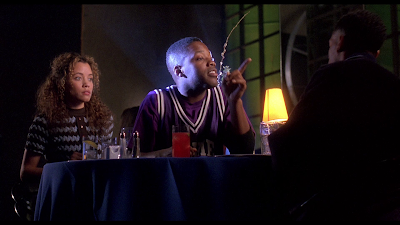 Rob: Yeah, the third act was so jarring. It was like, “Wait, this is what the movie is about now?” Again, this whole thing is such a narrative grab-bag that I ended up wishing they’d just focused entirely on the mascot who can’t dunk.

Adam: What did you think of the special effects left over from the movie Kazaam? Why does Disney go from 0 to 60 with the basketball cheating instead of making it more subtle? Why isn’t everyone calling foul (no pun intended) on all the shenanigans happening at Washington Huskies games? The fans, most of the media and the other teams are like “Huh. Well, good game good game good game.” WHAT?!

Rob: The way that everyone just buys into Dead Antoine’s ability to have a tangible effect on events in the physical world is absolute bugnuts cuckoo, so much so that the main drama eventually becomes the fact that the team doesn’t want him to play because he’s a ball hog. What? And then things end with the coach looking up in awe at the Heaven Portal and asking, “Is that our sixth man? Cool! Let’s get drunk!” Like, THIS NEW KNOWLEDGE WOULD PERMANENTLY CHANGE YOUR EXPERIENCE WITH THE WORLD AROUND YOU! And I know it’s a movie, and I know that The 6th Man wants to be inspirational in that Disney way (It pays constant lip service to spirituality and belief), but very little in the film is actually about that, which makes its lack of definition and consequence feel that much sloppier. I really resent light and airy films make me overthink them. That’s not what this movie should be.

And, hey! Why doesn’t Tyler play things cool for even a second? He’s constantly getting into physical altercations with (and succumbing to exaggerated laughter specifically in the direction of) his dead brother’s spirit. The bit where he’s trying to fake out Antoine so he can kiss J.C. Cristian St. Paul is kind of funny, I guess, but is it worth us losing all respect for our protagonist?

Am I being a grump about this? I know this movie wants to be fun, but I found it way more frustrating than I’m Thinking of Ending Things. 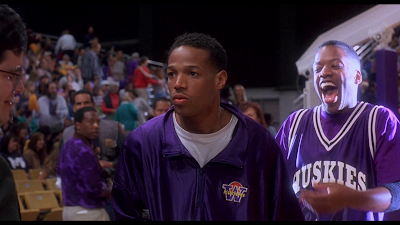 Adam: I still haven’t seen the latest Charlie Kaufmann so I can’t say. I thought The 6th Man was mostly inoffensive. I think I got most of my righteous sports movie anger out at Disney with Angels in the Outfield so I have little left for The 6th Man. Plus, I just saw Marlon Wayans be good in On the Rocks and Kadeem Hardison have some untapped star-power in Def By Temptation, so both actors are cool with me.

Since this is a new series within Reserved Seating it makes sense to pose the question: What is it that makes a movie the #100th most financially successful film of a given year at the domestic box office? It can’t be something that no one has any interest in (or it would rank lower) but it can’t be anything that tapped into the zeitgeist. I’m predicting we’ll run into a lot of failed star-making vehicles as we explore Hundos from other years. These movies probably have niche appeal at best.

Rob: Failed star vehicles or victims of calendar circumstance, probably. The 6th Man opened (appropriately enough) in sixth place behind Liar Liar, The Devil’s Own, and Jungle 2 Jungle on March 28th. The Special Edition re-release of Return of the Jedi was also in its third week, so it was a crowded field. I don’t know. This was fine, but I do hope we find some gems in this series.

What’s up for next week?

Adam: Our Pixar series returns with 2004’s The Incredibles. Until next time…