Alison: It felt right to return to The Princess Switch this year with the release of its sequel. I watched it back when it was released in 2018 and have talked it up since then to Adam. I remember it being charming and delightful but now, two years and countless holiday movies later, would it hold up?

Vanessa Hudgens and Sam Palladio star in what Parent Trap might be if the stars were aged up and it were a holiday movie. Hudgens plays Stacy DeNovo, a heartbroken baker from Chicago who travels to Belgravia to compete in a holiday baking contest. While enjoying downtown Belgravia (which is a quintessential holiday movie setting), Stacey encounters Lady Margaret Delacourt (also played by Hudgens), who is soon to be married to the prince of Belgravia (Palladio). Lady Margaret asks Stacy to switch places with her for one last weekend to feel normal before becoming a princess. 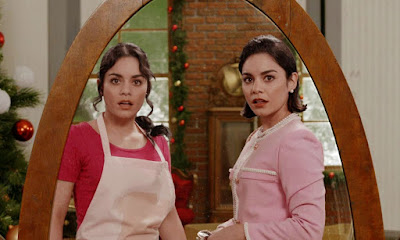 What I appreciate the most about the movie is that while the plot of the movie feels familiar, the writers knew when and where to keeps things light and veered away from the typical drama. Take Stacy DeNovo. It would be easy to hammer home how heartbroken and bitter she is at the beginning of the movie. Besides the necessary run-in with the ex scene, most of her story line is spent developing her romance with the prince of Belgravia. You can see the connection between the two characters and their relationship feels natural – not rushed or too contrived. The writers also make it so that DeNovo quickly assimilates into her role as a princess so we don’t spend too long watching her bump and fumble as a pretend royal.

It is inevitable in a movie with this plot, there is going to be a point in the movie where DeNovo and Delacourt are in the same place at the same time while pretending to be one another. We all know that the scene ends with their secret intact and thankfully the scene lasts just long enough to be entertaining. It also helps that there is no true antagonist in the story who is trying to ruin either DeNovo or Delacourt. This absence allows this scene in the movie to be more of a humorous oops moment than a perilous, tension-inducing plot point.

The writers also navigated the resolution – including the reveal - in such a way that didn’t feel too cliché. I expected the reveal to be some sort of dramatic event where at least one character storms off in anger and disbelief at being duped. To my delight, everyone seemed to handle the news well and we are able to keep zipping along to the happy ending. 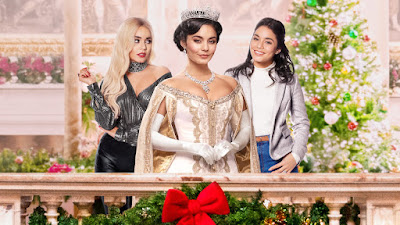 Adam: Alison is correct in that The Princess Switch has its charm. It’s exactly what I thought it would be, and while it may not be what I look for in a movie, I can see why it did well on Netflix. While I didn’t hate The Princess Switch, I didn’t like it as much as Alison and was not looking forward to watching the sequel nearly as much as she was. The Princess Switch 2: Switched Again starts out simply enough, with a voice over explaining what has happened in the year since we left the first movie and right away I’m having a hard time with it because they switch the actress who plays the little girl Olivia. This, of course, causes me to make jokes about everything from plastic surgery to alien abduction until Alison ignores me long enough and I wear myself out. I decide, though, that while it’s early I need shake it off and pay attention. After all, if I can enjoy Bewitched after they switched Dick York to Sargent, I can certainly hold my tongue watching a Netflix movie for 90 minutes. I am not going to spoil the movie, but in case you didn’t gather it from the title, Stacy and Margaret switch again. The first few minutes of The Princess Switch 2: Switched Again (okay, I’m not going to write that over and over, can we just all agree that I’m going to refer to it as Princess Switch 2?) is setting up a reason why they need to switch again, and then having the fallout from that occur. Had they just stopped there, I may have been okay with Princess Switch 2, but unfortunately a lot more happens than just switching again.

Almost all the problems in The Princess Switch 2 come from the story itself. It’s not entirely the fault of the writers, either, because the very genre of the movie makes things difficult. In the first Princess Switch and most “Twin-Switch” style movies, what works is that there really isn’t a “bad guy” because the tension and plot is driven by the audience knowing what only a few people know: the secret that these two characters are not who they appear to be. It’s a good formula that has been used many times in stories, but inevitably creates a problem with sequels of Twin-Switch movies because by time we reach a sequel, usually the jig is up. The more people that know the secret, the less tension this creates, so in the case of The Princess Switch 2 there is no doubt they could have just had them (as the title says) switched again, but instead they just add on ridiculousness. Shocking to me, but not to anyone who has seen the trailer or movie poster, is that the switch between Margaret and Stacy wraps up pretty quickly and adds a twist where Hudgens now plays a third character turning this from a “Twin-Switch” to a “Triplet-Switch” movie. Not only is there a third girl, but this girl is also the evil version of them, complete with evil schemes and henchmen. 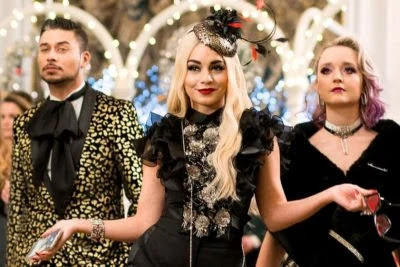