What is it now? December 15th? How on earth do you presume to get your loved ones the sweet, sweet merch they deserve when Santa’s Big Day is only ten days away? Good Lord, the sun has been going down at 4 pm! Time’s a-wasting, pal!

Take a deep breath. Try not to cough. We’ll get through this together. Remember: ANY RESPONSIBILITY THAT LANDS ON YOUR HEAD FOR LATE OR DELAYED CHRISTMAS GIFTS CAN EASILY BE SHIFTED TO THE *&%$!#@! CORONONA VIRUS.

Package didn’t arrive until THREE days AFTER Christmas because you only ordered it TWO days AFTER Christmas? Blame the Corona! “You know shipping everywhere is all backed up because of the (whispering) pandemic.” Don’t want to get together with the family this year? (Don’t want to get together with the family EVER?) Blame the Corona! “Oh, I’m so damn sad I can’t see you all this year, but I have seven co-morbidities. No, the virus is not a hoax. This will make next year that much more special, yes?”

Here are some humble suggestions for last-minute gifts for the movie lover that might just make it there in time. Of course, you can send a card or an e-mail or a text or a tweet that describes the gift for your beloved to receive now (Score!) and then the gift itself a bit later. (Score!) If the gift’s intended recipient has any kind of imagination, that’s like getting two gifts in one; one now and one later.

Or so you will tell them.

THE CURSE OF FRANKENSTEIN ON BLU-RAY 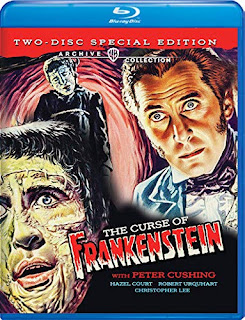 This comes out today, so there’s no way you could have planned this one in advance. As Patrick and I were bemoaning on a recent podcast, this seminal film has never had a decent disc release. Every previous disc version or streaming version looks lousy and faded. The restoration comparison on the YouTube machine looks very exciting, so buy this for your classic horror fan. Who knows? Perhaps in the hurley-burley of modern living, your loved one MIGHT NOT HAVE NOTICED that this was coming out at all. What a surprise to find this under the tree. Gosh. 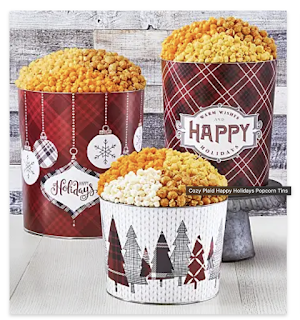 The Popcorn Factory has ginormous tins of the stuff at reasonable prices. It’s delicious. Who doesn’t like popcorn? What food screams “MOVIES!” more loudly than popcorn? The tin has a million and one uses once the popcorn is finished. Kids love to play with them. You can store things in them. Everybody wins.

TRUE STORY: One year a decorative tin may have saved my life. We used to store Christmas lights in a huge, empty popcorn tin, and I was carrying it in from the garage. I was walking quite fast, which I do not often do. I tripped. I flew across the patio. I am not exaggerating. My son looked out the window from the kitchen and later described me as “horizontal.” I landed on the tin, which broke my fall and absorbed the impact. I was fine; the tin was crushed beyond recognition. If it were not for that wonderful popcorn tin, I could have died or broken important bones. God bless the tin.

A HOMEMADE GIFT CERTIFICATE FOR A STREAMING SERVICE

Tired of hearing your special someone belly-aching about the sheer number of enticing streaming services currently available but economically out of reach? Treat them to some scrumptious streaming! (That last sentence really benefits being read aloud in the voice of Sylvester the Cat from Looney Tunes.) The Criterion Channel is an excellent choice. So are HBO MAX and Peacock. Knock yourself out. Throw in a gift certificate for a free backrub or, if you’re gifting them with Netflix, a separate, special homemade gift certificate for some “chill.”

This is for the vinyl-spinning, movie-loving hep cat on your list. These little 3 ¾” inch tall monsters fit over your turntable spindle and spin right ’round, baby, right ’round (with the record, baby—right ’round, ’round, ’round!) Frankenstein’s Monster and the Bride are shipping in December. The creepy They Live politician ships in February. The Halloween Maskie Guys, the Mummy, the Invisible Man, and the Creature from the Black Lagoon are shipping next March. I can’t think of another item this Christmas that serves less of a useful purpose. It literally “sits and spins.” This thing reminds me of ME during the pandemic! I want this one very badly.

No, not to the Human Fund. We all know that’s not real.

It’s no secret that COVID-19 has torn all of society asunder this year, and many organizations and individuals are having a hard time making a go of it this Christmas.

Last night, I caught the last thirty minutes of the 1938 A Christmas Carol on Turner Classic Movies, and it reminded me that Charles Dickens was an excellent student of the human psyche. He realized the only way to change some people’s minds—to get them to be a little more tolerant towards others and loosen the old purse strings—was to invite them, through narrative fiction, to imagine their own grim, lonely deaths. 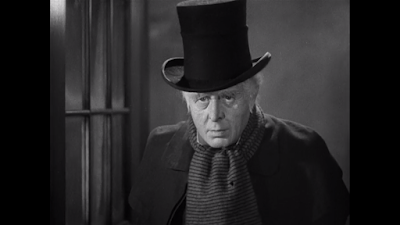 As I watched Reginald Owen experience his great enlightenment for the oxteenth time, it occurred to me that, this year more than any other, it’s been pretty damn easy for many of us to imagine our own deaths. Let’s all breathe a COVID-free sigh of relief and do some good while we’re still kicking. It’s great to be alive.

Many local food banks prefer cash donations this year; it cuts down on human contact for drop-offs and such. If you have a friend or family member who really doesn’t need another tie or another pair of socks, consider making a donation to a local food pantry in their name. That’s the gift that keeps on giving—the gift of feeling good. And this is a gift that doesn’t have to be wrapped or shipped, making it perfect for last minute gift giving.

A LENGTHY AND ANNOYING AUTOBIOGRAPHICAL PAUSE: Back during my teaching days, my homeroom would “adopt” a local family during the holidays and through a local community charity provide them with a Christmas. Every year, it gave me a boost to see some of the quietest and most “tragically hip” kids come out of their shells to help with this project. Some kids donated money. Some kids collected the money. Some kids volunteered to shop. Every year we were given the names and ages of the kids in the family, and I can still remember the spirited discussions among my students of what the “hot gift” that year was for five-year-olds. Some kids wrapped the gifts. Other kids volunteered to grocery shop, because we also provided the family with Christmas dinner. It was quite a project.

I really liked how my school organized homerooms; every teacher’s homeroom had four ninth-graders, four sophomores, four juniors, and four seniors. Every year, the seniors would graduate and each homeroom would get four new kids; the group stayed together and each student had the same homeroom teacher for their entire school career. This gave each kid a familiar “contact person” every day and facilitated all sorts of ancillary matters. Underclass students knew that answers to school questions were as close as their homeroom peers and upperclassmen.

When I spoke with my homeroom seniors about their last year in school, they always brought up the Adopt-A-Family project. It was something they felt proud about; a surprising number of students admitted that, like me, they thought about the family that we had provided for on Christmas Day, and that our participation in the program made us feel better than any other present we had received. This led to the new tradition of Mr. B. strolling into homeroom the day we returned from winter break and enjoying the shared response when I asked, “How many of you thought about our adopted family on Christmas Day?”

All of my readers can get that same great feeling this year, and your choices are endless. There have never been more worthy groups and people in need. Good Lord! Just look at recent headlines about Flavortown Mayor Guy Fieri, quietly raising 21 million dollars to help restaurant workers in his state.

As Bill Murray famously said in Scrooged, “And it can happen tonight for all of you! If you believe in this pure thing, you'll... the miracle will happen and then you'll want it to happen again tomorrow! You won't be one of these bastards who says, 'Christmas is once a year and it's a fraud.' It's not! It can happen every day! You've just got to want that feeling! And if you like it and you want it, you'll get greedy for it. You'll want it every day of your life... and it can happen to you! I believe in it now. I believe it's gonna happen to me now. I'm ready for it! And it's great. It's a good feeling. It's... it's really better than I've felt in a long time. I'm... I'm... I'm ready.” 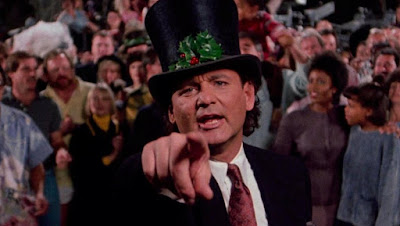 I’m not going to presume that I’m a better judge of charities than my readers, but I’m a big fan of local food banks and shelters, Habitat for Humanity, and local arts groups that really took it on the chin this year. If you live in the Chicagoland area, consider a Music Box Theater membership or a gift certificate or one of their “to-go” concession packages. They have the best popcorn on earth. I can’t imagine the Music Box closing; let’s help them out. 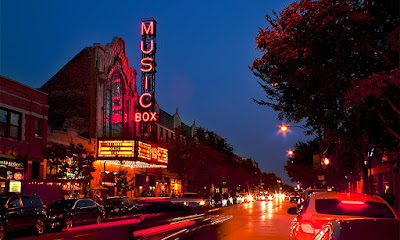 REALLY, REALLY MEAN, BUT ALSO KIND OF GOOD: If there are friends and family members on your list that you detest, but feel obligated to provide with some sort of gift, consider making a donation out of spite. (I want it to be known that, while I did not INVENT the Spite Donation, I may have PERFECTED it) This is an excellent year to try it out because social distancing is keeping many families from meeting face-to-face this year. You will not face anyone’s wrath in person.

I’m guessing that it’s often politics and values that divide some families. Indeed, uncomfortable conversations and “druncle diatribes” have become Thanksgiving cliches. Think of that brother or sister, uncle or aunt, friend or coworker with whom you most disagree. Make a donation IN THEIR NAME to a charity that you know WOULD MAKE THEIR BLOOD BOIL.

(POSTSCRIPT: Because I live in constant fear of my own hypocrisy, writing this column led me to make a donation to a charity... sincerely. I do not want to be accused of meaningless virtue signaling, but maybe you can GUESS the charity I chose in the comments sections below. If anyone guesses it correctly, I will make a donation to the charity of your choice!)
Posted by Patrick Bromley at 5:00 AM