It Came from the '80s: MY SCIENCE PROJECT 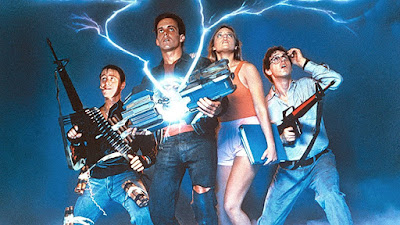 I miss the 1980s. At a time when there's a full-on war being waged against science -- on every front from wearing masks to climate change -- I look back fondly to a time when science was cool, at least in pop culture. Movies like WarGames, Real Genius, Ghostbusters, and Weird Science made heroes out of science nerds. While not in the same league as those films as far as both critical opinion and popularity go, 1985's My Science Project is yet another '80s movie to make science an adventure, full of mystery and wonder. Said science may be total nonsense, but that's not the point. The point is that movies like My Science Project come from a bygone era (era) of Hollywood when it was the nerds who saved the day.

Michael Harlan (John Stockwell) isn't exactly a nerd, though. He's a gearhead who lives his life under the hood of a car, so much so that he's in danger of not graduating. His hippie science teacher (Dennis Hopper) tells him that unless Mike completes his science project, he's going to flunk out of school. On a date with bookish school reporter Ellie Sawyer (Danielle von Zerneck), John goes to an airplane graveyard where he comes across a mysterious glowing device that he manages to grab and run away just before he and Ellie are caught by military security. Strange things begin to occur as Michael and his friend Vince Latello (Fisher Stevens, really leaning into the name "Vince Latello") start messing around with the device, like hours that disappear unaccounted for, glowing energy emanating from the device, and finally what appears to be the zapping of their favorite teacher into another dimension. Determined to destroy the device before its power spreads any further, Mike, Vince, and Ellie race to deactivate it as a temporal portal opens, causing past, present, and future to exist all at once. 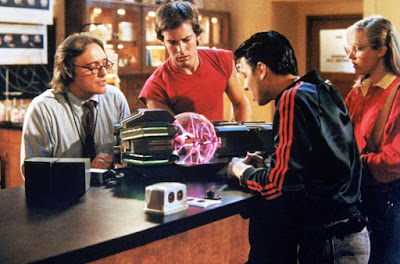 While not quite a classic of '80s cinema, there's a lot to like in My Science Project, particularly if viewed through the prism of post-Star Wars '80s genre cinema in which an unlikely hero is thrust into some sort of crazy sci-fi or fantasy adventure. These kinds of movies were very popular during the first half of the decade, and they're the kinds of movies on which the foundation of a column I've been writing on and off since 2012 is built. What separates My Science Project from other movies of its ilk is that its main character is not a geek in the traditional Hollywood sense. Whereas the leads of films like WarGames and Real Genius were defined by their curiosity and intellectual capabilities -- their ability to outsmart everything and everyone -- Mike Harlan is blue collar, an outsider to the world of science. He likes cars and Springsteen and he's never even seen Return of the Jedi. That gives the movie some novelty.

Also giving My Science Project some novelty is the very sweet relationship between Michael and Ellie, who in most other movies (like, say, the work of John Hughes) would be a punchline. They're mismatched from the outset; she's bookish and "nerdy" (in movie terms) and he's totally focused on rebuilding cars. The film even sets up a more "appropriate" romantic counterpart in Sherman (Raphael Sbarge), a nerd character right out of the '80s movie playbook (and episodes of Saved by the Bell). Sherman clearly harbors a crush on Ellie and is jealous of the attention she shows to Michael, which makes as much sense to him as it might seem to make to the audience. Her asking Michael out is part teenage crush, part desperation to not be seen as a high school spinster, but the romance that develops between them is adorable. It reminds me of the romance between Mitch and Jordan (maybe Ellie's closest onscreen counterpart) in Real Genius, but those two at least belong to the same social strata. Sure, Mitch is awkward and uncomfortable around girls -- especially one as quirky and original as Michelle Meyrink's Jordan -- but they're both intellectuals who speak the same language. Mike and Ellie are unlikely as friends, much less as sweethearts. "You lived under car hoods, I lived in books," she tells him. 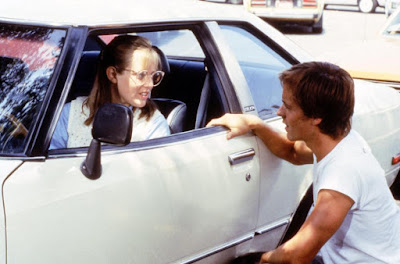 Stockwell, who got his start in Albert Pyun movies and has since gone on to become a successful director of action movies about people in swimsuits, is maybe at his most likable in My Science Project (it's a toss-up between this and Christine, which actually gets a shout-out here). He has a pleasant blankness as a good kid who just wants to keep his head down and do what he loves. Michael isn't dim, but he is simple, and Stockwell gets right to the heart of the character with just a facial expression and physicality. I like that his arc takes him through the wonder of and magic of science, even if it is courtesy of an alien artifact. Science has shown him some shit, and by the end he sees his car as "just a car." It's a beat that's less about prioritizing and more about Michael having his mind opened up to new possibilities. Stockwell sells the transformation well. Fisher Stevens is a little tougher to take, really putting the "obnoxious" in "obnoxious best friend." His Brooklyn-bred greaser is a never-ending font of wisecracks and colorful put-downs, but both the character and the performance become pretty grating after awhile. It's the kind of part that might steal the show in another movie, but here plays more like a parody of itself.

It's funny, because for years my memory of My Science Project was that it was about three teenagers with guns battling everything from cavemen to Viet Cong to post-apocalyptic mutants to a giant T-Rex (realized via pretty impressive effects for 1985). Upon revisiting it, I was surprised to discover that sequence only makes up the last 20 minutes of the movie or so. The rest of the movie is much more slowly paced, which means it will test the patience of some viewers; the military junkyard sequence (which my wife is convinced directly influence a similar airplane graveyard scene in her beloved Can't Buy Me Love) goes on longer than it probably needs to. What keeps it going are the performances, the aforementioned romantic subplot, and the colorful dialogue from writer/director Jonathan Betuel, who directed only this movie and Theodore Rex but is also responsible for writing The Last Starfighter, another great '80s sci-fi fantasy in which a geek (at least a video game geek) saves the day. There are a number of inspired jokes in Betuel's screenplay, from Fisher Stevens' constant pop culture references (the movie is ahead of its time in this way) to spoilers a pre-comeback Dennis Hopper, previously thought blinked out of existence, returning from the space/time warp dressed exactly like his character in Easy Rider shouting "The future is a groove!" It's a great gag.

I don't remember thinking much of My Science Project when I saw it years ago. Watching it again on Kino Lorber's new Blu-ray was a real re-discovery, turning it from a movie for which I had very little recollection into a movie I really like. It's kind of a proto Bill & Ted's Excellent Adventure, only here the stakes quickly raise from whether or not our protagonist is going to pass high school to saving the entire space-time continuum. Its appeal is more of the cult variety than the mainstream, as it's the kind of film you either had to love back in 1985 or for which you have to have a high tolerance. I'm the latter, a student of the kinds of genre movies that only got made in Hollywood for a very brief window. I miss when studios made movies like My Science Project. Or movies with "science" in the title. That kind of thing doesn't really happen anymore, because these days our leaders don't care about or listen to science. Sorry, Dennis Hopper. Maybe it's just the 2020 talking, but the future has not been a groove.

Email ThisBlogThis!Share to TwitterShare to FacebookShare to Pinterest
Labels: 80s movies, it came from the '80s, john stockwell, my science project