Two for One: THE REF & THE SILENT PARTNER 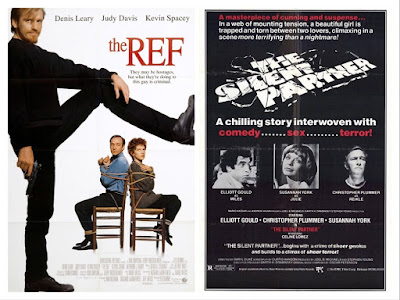 “Look kid, what I do – running around, stealing stuff – may sound great when you're 14 years old, but it sucks just a little bit when you're 35.” - Gus

It's the holidays, we're in the middle of a pandemic, and I don't know about you, but it doesn't quite feel like the Christmas season. So make yourself some hot cocoa or brew up a batch of hot toddies, and let's have a double feature of criminals IN OVER THEIR HEADS ON CHRISTMAS! (*cue theme music*)

We kick things off with an oft-forgotten comedy from 1994 directed by the late Ted Demme and starring Denis Leary, Judy Davis, and Kevin Spacey (barf), The Ref. The film follows Gus (Leary), a burglar who is abandoned by his partner when the alarm of the house they're robbing is triggered on Christmas Eve. Gus makes a run for it and kidnaps Caroline and Lloyd in order to hideout at their house. What Gus doesn't realize is that Caroline (Davis) and Lloyd (Spacey) are in a loveless marriage where most of the time is spent blaming the other person for the marriage's failures. Meanwhile, Lloyd's mother ( and brother and his family are on the way to their house for dinner. Caroline and Lloyd's delinquent son is also set to arrive home from military school. Gus soon realizes he's... IN OVER HIS HEAD ON CHRISTMAS! (*cue theme song*) 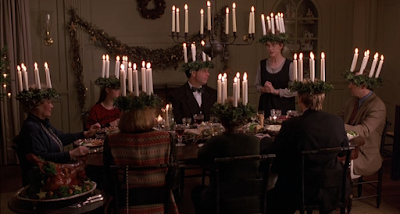 Let's get this out of the way: Kevin Spacey is a monster and I don't need to see his stupid face ever again. He doesn't do anything revelatory in this movie, and the part could've been played by just about anyone. The rest of the cast, though, is pure magic. Judy Davis is hysterical in the role of a wife to a husband who's always kowtows to his mother. Caroline is the perfect blend of loving mother, hateful wife/in-law, neurotic hostage, and new-age yuppie. For dinner she has prepared a traditional Scandinavian feast complete with lutefisk. But the best part is that she's adorned every person at the table with a crown of candles and leaves. Leary is Leary in the role of the burglar/kidnapper, but I love Leary so it works for me. But perhaps the best performance of the whole film comes from Christine Baranski as the sister-in-law, Connie. She's clearly a fake and phony when it comes to the approval of her mother-in-law, and she hates Caroline. She's a domineering wife, a no-bullshit mother, and a passive in-law. It's exactly what you want out of a Baranski performance.

We follow a a Christmas comedy up with a Christmas thriller that goes way off the rails towards the end. The Silent Partner is a Canadian film from 1978 directed by Daryl Duke and starring Elliott Gould, Christopher Plummer, and Susanna York, with an early role by John Candy. Gould is Miles, a quiet and lonely bank teller at a mall who admires Julie (York) from afar. One day Miles sees a note written by someone saying they have a gun and to pass over all the money. That robbery had never happened, though, but one day during his lunch break Miles notices the writing on the mall Santa's sign matched that of the note. Being prepared for next time, Miles squirrels away half the money in his register when the mall Santa (Plummer) returns to rob the bank. Santa's real name is, Reikle, and we soon learn he's a sadistic psychopath. It becomes a cat and mouse story with Reikle hunting Miles but Miles always seems to be one step ahead. 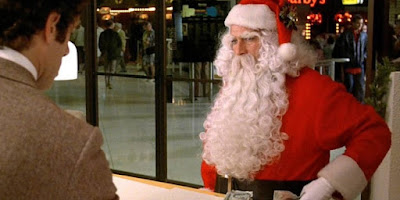 I think there's a lot to unpack in The Silent Partner – much more than just criminals in over their heads. But I don't have the space here for that. So instead, we're focusing on Miles becoming a criminal learning that he may not be cut out for that life. Plummer's Reikle is one of the most terrifying villains I've ever seen. He goes from bank robber to executioner in 90 minutes and in between we learn he lacks any sort of empathy, which makes him all the more scarier. Miles isn't necessarily a likable character, either. After all, he also stole from the bank, and exudes toxic masculinity (that's what I'm not unpacking). Miles thinks he can get away with this because he thinks he smarter than Reikle. What Miles never took into account, though, was that the decision he made was a big one and it would completely disrupt his life. Ultimately the movie ends a little too sweetly for me. But don't get me wrong: it's gritty and I love it.

I guess the moral of this double is that before you turn to a life of crime, you need a moment of introspection to see if you're really cut out for it. And plan ahead for goodness sake! You don't want to become the hunted, and you don't want to end up in the middle of a loveless marriage. Happy Holidays!
Posted by Patrick Bromley at 12:00 PM