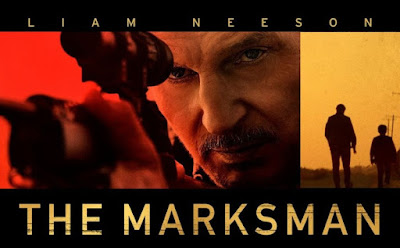 While there’s always a certain sense of unease and unpredictability at the beginning of a new year, there’s at least a bit of comfort in knowing that Liam Neeson is still our Angry Action Dad, a figure of justice and moral righteousness standing vigil through the long and lonely night. His latest crusade is The Marksman (originally titled The Minuteman and still referred to as The Sharpshooter in the depths of my ever-melting brain), a Clint Eastwood-esque yarn about an Arizona rancher (Neeson as Jim Hanson) who takes custody of a young Mexican boy (Jacob Perez as Miguel) after his mother is murdered by a drug cartel. The Eastwood comparisons are by design, of course, as The Marksman is helmed by long-time Clint producer Robert Lorenz, who made his directorial debut with Trouble with the Curve (also starring Eastwood) in 2012. His second effort is a competent -- if uninspired -- Western drama that scrapes by on good intentions, destined for prominent display in your nearest Redbox. 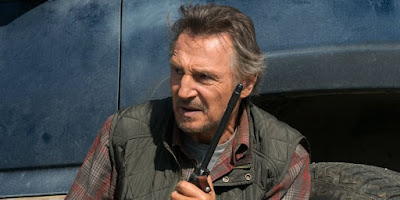 Watching The Marksman is a lot like playing your favorite game on the lowest difficulty setting: It’s familiar, routine, and eats up just the right amount of time. You know just where each turn leads, but it still scratches that itch. What’s wrong with that? Neeson -- who half-heartedly tries to layer a Southern accent over his Irish lilt -- is much better than this, but hell, doesn’t he also deserve to play life on Easy every now and again? His Hanson is archetypal to a tee, a rugged and individualistic widower whose stepdaughter (Katheryn Winnick) seems to exist only to be Worried About Him as he descends into an alcoholic stupor with just a loyal dog at his side. Juan Pablo Raba soon enters the fray as the ruthless drug kingpin out for revenge against Miguel’s family after some sort of drug-related robbery. He chases. Hanson and Miguel run. You get it. The pair form an unlikely bond on their cross-country trip to reunite Miguel with family in Chicago, a couple of lost souls who soon learn that they’re broken in just the same way.

While Neeson and Perez deliver performances endearing enough to prevent us from falling asleep, nothing about The Marksman is remarkable -- or even incompetent -- enough to bear much mentioning. There are little to no variations on any of its well-worn themes. Everyone is exactly who you think they are: Henson is drawn to this mission out of a sense of paternal purpose. Miguel resists at first, but he comes around after Henson demonstrates his mettle as the titular marksman and his willingness to stuff him full of free hamburgers. It’s a movie full of easy, obvious choices made by virtuous heroes who behave in honest and genuine ways. The villain? Well, he’s bad. He’s greedy and vengeful and he wants to settle the score in that classically antagonistic way. So, the real question is this: Is that bad? Is The Marksman a bad movie just because the characters have no real texture and its drama is just shy of inert? It depends on how much stimulation you need from a Liam Neeson movie called The Marksman. 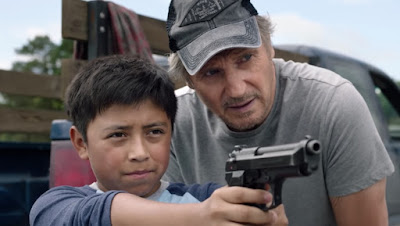 My guess is that your answer will be “Not much.” It’s January, after all, cinema’s most notorious dead zone. There’s no reason not to detox with The Marksman’s easy charm after a night of catching up with 2020’s Oscar bait. As Liam Neeson drifts further and further toward DTV actioner territory (as Adam Riske and I predicted in a recent column), I’m finding a certain elegance in his commitment to his brand. Neeson does real work, of course, highlighting recent auteur fare like Silence and The Ballad of Buster Scruggs, but I’m starting to think he takes a certain amount of pride in churning out the Cold Pursuits and Run All Nights of the world. Something tells me that he really does want to be our Angry Action Dad, that maybe he’s found a way to corner the market on something really special while the rest of us weren’t paying any attention. There’s a real elegance in that, I think. A sincerity. It’s a hell of a lot better than him getting stuck as the twelfth lead in a Marvel movie, isn’t it?