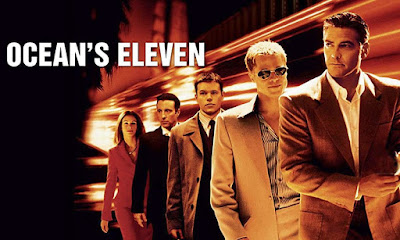 Nominated for Best Dressed (George Clooney) at the MTV Movie Awards. He lost to Reese Witherspoon in Legally Blonde.

• Best Scene/Moment: I love the meetup Ocean’s Eleven (minus Clooney’s Danny Ocean) has at the Fountains of Bellagio after they complete their big heist. It’s a cinematic fountain and the scene is scored by Claude Debussy’s “Clair de lune,” a piece of music that wrecks me anytime it’s in a movie.

• Best Food: Everything Brad Pitt eats throughout the movie including a cheeseburger, a shrimp cocktail, a fruit salad, and ice cream. Apparently, this character choice was Brad Pitt’s idea because he thought his character wouldn’t have time to stop and eat, so instead he’s always be eating on-the-go while working. 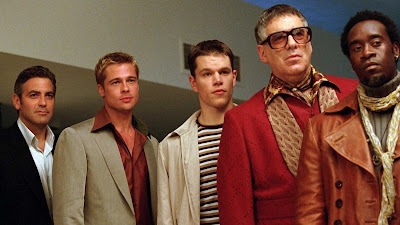 • Best Song: The track titled “Tess” from David Holmes’ score to the movie has a really nice vibe to it. It sounds like elegance and endless opportunity. I don’t get that exactly from the character Tess (Julia Roberts) in the movie but that’s ok.
• Best Merch Available on eBay Right Now: A screen-used prop of the detonator George Clooney and Matt Damon use in the vault scene for only $10,000.00. Sounds expensive, right? I have two suggestions: 1) PayPal Credit offers a $446/month payment plan for 24 months or 2) Get 10 other people together and steal it. 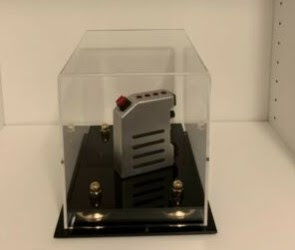 • Director Check: Ocean’s Eleven was part of Steven Soderbergh’s commercial peak, which also included 2000’s Erin Brockovich and Traffic. Soderbergh has had a fascinating, diverse career ranging from small and/or prestige indies to big budget commercial movies and all the way back to experimental films. Movies like the Ocean’s trilogy afforded him the opportunity to make a lot of films for which he maybe wouldn’t have otherwise gotten the backing, so for that I’m thankful. Lately he’s been making movies with various streaming services, including Netflix’s High Flying Bird and The Laundromat as well as HBO Max’s recent Let Them All Talk. I really like Soderbergh. If you haven’t checked out some of his more under the radar work like Bubble, The Girlfriend Experience, The Informant! or Unsane, you should. They’re really good.

• Year 2001 Movies to Trailer Before It: Ghost World, A Knight’s Tale, The Royal Tenenbaums

I love these videos where an expert in a particular field or trade critiques the accuracy of something in a movie. This video is of a former jewel thief grading movie heists including Ocean’s Eleven, Heat, and Snatch.

• Mall Movie? No. This is class. Fancy theater all the way. 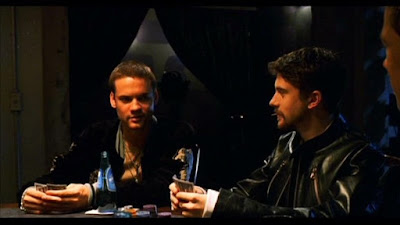 • I Miss: George Clooney acting in movies he didn’t direct.

• What I Thought in 2001: I somehow didn’t like Ocean’s Eleven the first time I saw it. I thought it was too impressed with itself (it is, but that’s the whole point) and up its own ass (Ocean’s Twelve at times). I wasn’t a fan of the movie until a revisit on DVD in 2002.

• What I Think in 2021: Ocean’s Eleven’s the best! It’s hard to make a movie feel effortless and cool and this is a prime example where it worked. I hadn’t seen Ocean’s Eleven in at least 10 years, so this revisit was fantastic. We were spoiled in the early 2000s. Movies were great back then.
Posted by Patrick Bromley at 12:00 PM