Movies is Good: WINGS OF THE HAWK

More 3-D goodness from the fine folks at the 3-D Film Archive!

I cannot for the life of me understand why major electronics companies have all stopped making 3-D capable monitors. In January 2017, the last two television manufacturers still making them, Sony and LG, announced they would stop all 3-D support. What, they didn’t sell? Consumers wouldn’t pay a small premium to have that capability in reserve just in case they wanted to watch a film in 3-D someday? Was there a shortage of the rare element, three-dee-dium, needed to make the glasses? I have gotten more pleasure out of the 3-D capability of my Sony monitor than perhaps any audio/video component I have ever owned.

Okay, except maybe my original laser disc player. “Petey” was my boy. 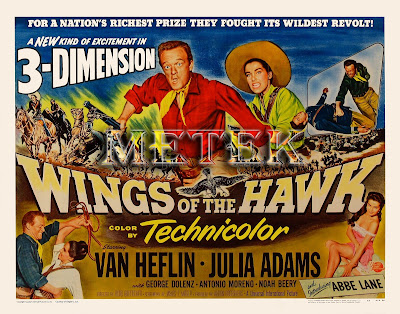 I could just be showing my age. If it were up to me, twenty or thirty NEW pinball machines would be designed and manufactured in this country EVERY year, the “House of Horrors” walk-through attraction at Universal Studios Hollywood would STILL be up and running and NOT turned into a Starbucks, and movie theaters nationwide would STILL be popping their corn in palm kernel oil. De-(THUMPS HEART WITH FIST)-licious.

While I am pleased as punch that Ron Furmanek and the 3-D Film Archive continue to do their amazing, important work restoring these films and returning them to their original glory, I can’t help but wonder how long this will continue. Slowly but surely, the number of sets capable of showing off their work continues to dwindle. I must now regard my personal glass of 3-D goodness as half full, counting myself lucky that I can continue to enjoy this specific slice of cinema history. 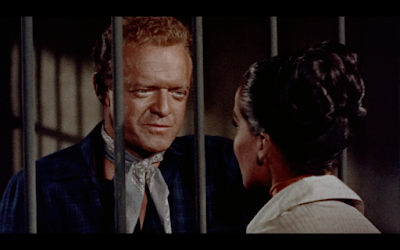 The Plot in Brief: Just when Irish Gallager (Van Heflin) catches a break and discovers gold south of the border, Coronel Ruiz (George Dolenz) and the Mexican Federales ride in to steal it from him. Suddenly, a local band of rebels, led by Raquel Noriega (Julie Adams, billed here as “Julia”) rides in and saves Gallager’s ass. Hiding out in a nearby town, Gallager and his new friends hatch a scheme to buy guns with their newfound gold. They will use the guns to kill Ruiz and the Federales, then turn the town over to local bandit chieftain Pascual Orozco (Noah Berry, Jr.). Does the plucky band’s plan stand a ghost of a chance? Will Noriega discover her morally flexible sister Elena (Abbe Lane) is sleeping with… someone? Will loyal soldier Tomas (Pedro Gonzalez-Gonzalez) go on… some kind of rampage because… something horrible happens? Will Gallager and Noriega fall in… some kind of emotion? No spoilers for Wings of the Hawk!

Also, will anyone figure out why this movie is titled Wings of the Hawk when that phrase is never uttered in the film even a single time?

FULL DISCLOSURE: I guess I wasn’t paying attention when the film first began, establishing that Van Heflin’s character’s first name actually seems to be “Irish.” I thought every character for the rest of the movie was calling him that as low-key ethnic slur because of his red hair. 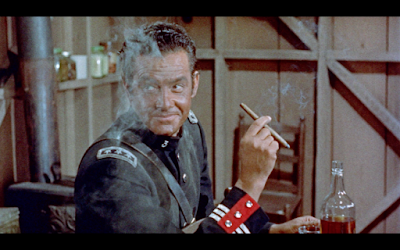 There’s a lot to like in this modest little film. It was filmed on the Universal backlot (and at Crash Corrigan’s famous movie ranch) so it shares some familiar settings with all of Universal’s other westerns AND Quentin Tarantino’s recent Once Upon a Time in Hollywood. (I kept waiting for Julia Butters to show up.) The 3-D is glorious, both in the many scenes that were framed and shot to emphasize depth and in the more “gee-whiz moments” like a revolver being lowered on a string through the top of a jail cell and into the audience’s laps. A veritable army of distinctive supporting players appears: Julie Adams and Antonio Morena, who would both return in Universal’s Creature from the Black Lagoon; George Dolenz, who had a long career as a character actor in Hollywood and is indeed Monkee Mickey Dolenz’s father; Noah Beery, Jr., following in both his father’s and more famous Uncle Wallace’s footsteps as a memorable heavy (he gives one of my favorite performances in Inherit the Wind with a single line, “My name... is George Stebbins.”); and Pedro Gonzalez-Gonzalez, appearing here in his first film after he proved a sensation as a contestant on Groucho Marx’s then-new TV quiz show, You Bet Your Life.

Director Budd Boetticher apparently hated the 3-D gimmick and refused to shoot some of the more-gimmicky shots, so Universal had to spend extra money and time for a Second Unit to shoot them after principal photography had wrapped. Yet Boetticher directed Wings of the Hawk only three years before beginning his legacy, the seven Randolph Scott westerns for which he is now most famous. Apparently, Boetticher was an avid horseman, and it shows in his framing and staging of the action. Julie Adams’ horse in the film is played by Pie, Jimmy Stewart’s famous horse in all 17 of his 1950s westerns. Boetticher felt that Pie was so smart he could actually understand spoken directions. It is tremendously entertaining to watch Pie deliberately raise his head in shots so that he is more visible in the frame. 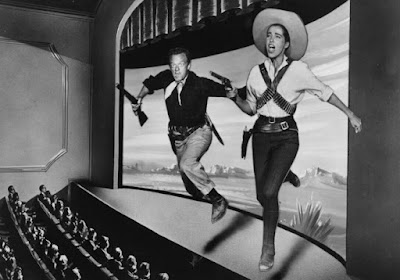 The new Kino-Lorber disc also features a terrific audio commentary by Jeremy Arnold, who was a personal friend of Boetticher. Arnold’s commentary is full of insight, history, and lore; it is a model of the format that other verbose scholars should study to brush up their craft. Arnold is entertaining, concise, and memorable. It’s a great track. I learned a lot. 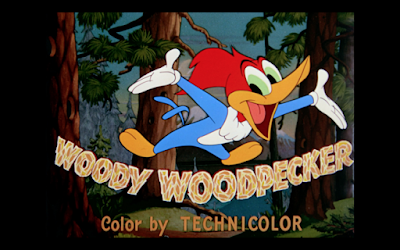 BONUS BIT: The other welcome extra on the new Kino disc is “Hypnotic Hick,” the 3-D Woody Woodpecker cartoon that originally accompanied Wings of the Hawk on its original run. This is a wonderful, fun extra, though the cartoon never really takes full advantage of the 3-D effect and seems produced only after massive budget cuts at the studio. The animation is a little crude, and at one point, Woody even steals Bugs Bunny’s signature line, “Ain’t I a stinker?” Was this some sort of inside joke from Walter Lantz to Chuck Jones? I wouldn’t blame Chuck Jones if he were use some newfound gold to purchase a cachet of rifles and summon the full force of a band of Mexican counter revolutionaries to exact a cartoon revenge on plagiarist Walter Lantz.