Review: JUDAS AND THE BLACK MESSIAH 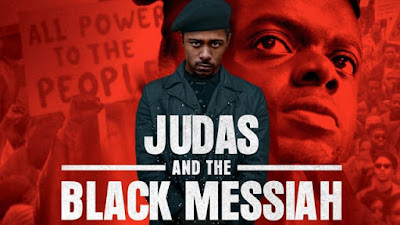 Here’s the truth about Awards Season, one that any faithful reader of this site already knows: Most of the Hollywood films nominated for major awards in a given year are thoroughly unremarkable exercises in calculated marketing intended to check as many tried-and-true Oscar buttons as possible. Actors are positioned for awards because they’re “owed.” Studios spend oodles promoting so-called “contenders” because they know that a product’s name recognition is more powerful than its genuine quality. Great works of cinematic innovation always sneak their way into nominations, of course, and some even go home with justly-deserved hardware, but the reality is that Awards Bait has long-since become a genre of its own, something entirely separate from the conventional moviegoing landscape. Will our post-COVID entertainment industry sustain that model? Will the invisible line between Prestige and Populist entertainment remain in a world with no box office? It’s hard to tell. 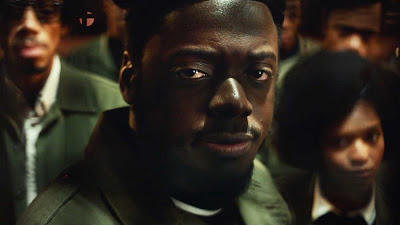 Why am I going on and on about awards? Because Judas and the Black Messiah, which premiers in theaters and on HBO Max today, bridges that gap more beautifully than any film I saw during the extended 2020 awards cycle and, frankly, I’m frustrated by its late entry into the fray. Why were we debating the merits of pompous, performative dogshit like Mank or The Trial of the Chicago 7 while this film waited in the wings? It’s a rhetorical question, of course; I know the answer, but Judas and the Black Messiah deserved to be on more Best-Of lists, dammit. It’s the true story of 1960s Black Panther luminary Fred Hampton’s (Daniel Kaluuya) betrayal and subsequent murder at the hands of FBI informant William O’Neal (Lakeith Stanfield). Working under the direction of Agent Roy Mitchell (Jesse Plemons), apolitical car-jacker O’Neal is offered a choice: Go to prison or infiltrate an institution determined to upend the status quo by any means necessary. O’Neal chooses the latter, unaware of how firmly Hampton’s rhetoric would capture his imagination.

While that description makes the film sound like grim, sobering homework, Judas and the Black Messiah is an effortlessly captivating watch thanks to star-making performances from Kaluuya and Stanfield, Shaka King’s gorgeous direction, and a screenplay (co-written by King and Will Berson) that refuses to compromise the moral ambiguity and incredible human cost of true revolution. At just twenty-one years old, Fred Hampton had already made a name for himself as one of Chicago’s most inspirational advocates for social justice. His words spoke not just to African Americans, but to the militant downtrodden of all shapes, colors, and creeds. O’Neal spends much of Judas and the Black Messiah watching Hampton risk his life and reputation to build consensus among competing factions, at one point going so far as to address a group of self-described “white trash” and remind them who their real oppressors are: Police, governmental agencies, and any other entity aiming to reserve the American Dream for only a chosen few. 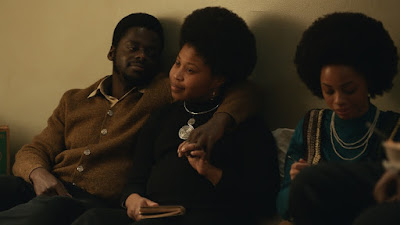 And while O’Neal’s attempts to report on Hampton’s activities are stymied by his growing affection for and solidarity with the Panthers, the film never forgets that each and every one of its characters is a human being with their own complicated role to play in the war against bigotry and institutional injustice. There’s no Big Scene, no Big Speech, no moment in which the moral lines between passive acceptance and violent revolution are made black and white. Every choice requires a concession of values. Every bullet fired takes resources from food, shelter, and education. O’Neal even describes pasty G-Man Mitchell as a role model, at one point, and he soon finds himself covetous of the middle-class lifestyle Mitchell enjoys, one that O’Neal himself could eventually earn through government service. Hampton, too, sees his commitment to revolution compromised by his expectant girlfriend, Deborah (Dominique Fishback), who shudders at the thought of bringing a new life into an active warzone. 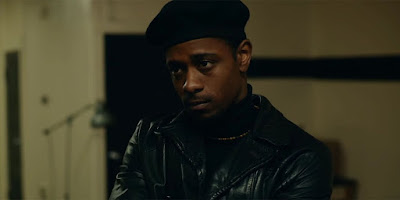 It’s this contrast between love and legacy that keeps Judas and the Black Messiah from getting overly histrionic or abrasive. Though the film’s horrifying climax is a foregone conclusion from its opening, we still find ourselves hoping things could end another way. On all sides of this conflict, there are soldiers ready to fight and die to preserve (or establish) a just and free way of life for those they hold most dear. However, Every one of them has their blind spots, their pressure points. The real punishments are not death or imprisonment, the film seems to insist, but when those shortcomings overwhelm our shared sense of community. When our cynicism trumps our idealism. When our instinct toward self-preservation poisons our inherently charitable nature. When Judas and the Black Messiah closes its story through stark white text against black, we’re reminded that — though the power may be with the people — the people have a responsibility to wield that power with grace, love, and fierce empathy.
Posted by Patrick Bromley at 12:00 PM