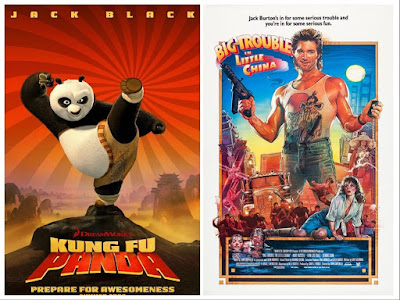 “See? That was nothing. But that's how it always begins – very small.” – Egg Shen

Ever since I started this column I've been wanting to do Big Trouble in Little China. It wasn't until a few days ago, though, that I finally thought of the perfect partner for it. This is just like the double features we used to go see at the Council Bluffs Drive-In when I was a kid. The first feature was always family friendly, with the second feature being more adult-oriented. While Big Trouble isn't necessarily a “mature” movie, if you have kids, and if they (and you) are adventurous enough, have the family watch this whole double bill! There's enough action and comedy here to keep the kids entertained for three hours. And as it turns out, this is an unintentional James Hong double feature!

I don't watch many animated movies for several reasons, chief among them is because certain companies (ahem, Pixar) have a goal of forcing tears out of my body. After watching a few, the emotional elements started to seem inauthentic and I felt forced-upon. (Maybe I have issues to work out?) Dreamworks, though, doesn't concern itself with making sad movies. So we kick things off with my favorite Dreamworks Animation film, Kung Fu Panda. It turns out my son, Eben, had never seen this (parental shame) so I was able to kill two birds with one stone here. 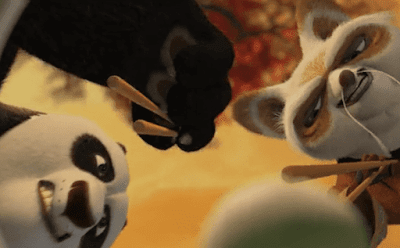 Kung Fu Panda stars Jack Black as... well, panda Jack Black. While the man has the ability to annoy the crap out of many people (including me), I think he's hysterical in this. Most of the casting seems a bit wasted (and very white), although I realize names sell tickets. Dustin Hoffman as Master Shifu is great, playing the straight man to Black's funny man with lines like, “Panda, we do not wash our pits in the pool of sacred tears.” Other voices include Angelina Jolie as a tiger, Lucy Liu as a viper, Jackie Chan as a monkey, Michael Clarke Duncan as a rhino, Dan Fogler as a bird, Ian McShane as the big baddie cat, and of course James Hong as a crane. The two oddest casting choices are Seth Rogan as a praying mantis and David Cross as a crane, both supposedly two of the fiercest kung fu warriors (with zero funny dialogue) in the world. Sorry folks, I don't buy it.

Weird casting aside, the action in Kung Fu Panda is pretty damn spectacular. I realize we're talking about a cartoon, but having not watched this for 12 years I found the fight sequences totally gripping (between anthropomorphic, animated animals). I recently went through a period of watching several kung fu movies and there is plenty of influence to be seen here. Specifically, I was reminded of any number of sequences in the Shaw Brothers classic Dirty Ho (1979) during a scene in Kung Fu Panda where Po (Black) and Shifu are fighting over a dumpling with chopsticks. Clearly the filmmakers respect these movies and paid great homage to many of those Golden Harvest and Shaw Brothers productions.

We follow our family feature with my favorite film from my favorite filmmaker: John Carpenter's Big Trouble in Little China. The funny thing is when I saw this as a kid I HATED it. I think it had something to do with the fantastical aspect of it when all I wanted was straight up action. But when I watched it again for the first time in 25 years a while back I LOVED it. So much so that I watch it at least once a year because I find it to be one of the most comforting movies ever.

Big Trouble is the ultimate Carpenter movie for my money. It's a perfect showcase for a journeyman director who has weathered independent filmmaking as well as the studio system. In one movie, Carpenter shows us he can direct an action movie, a monster movie, a kung fu movie, a comedy, a western, and a drama. He's working from a story adapted by W.D. Richter (Nickelodeon, Invasion of the Body Snatchers, Needful Things) which opens up an entire imaginative universe-sized sandbox in which any filmmaker would revel to play. 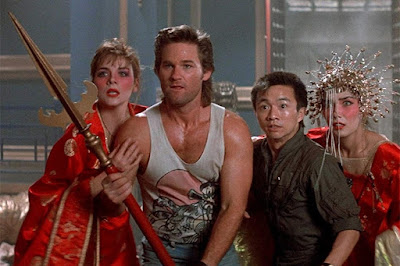 In Big Trouble, everyone in this dynamic cast plays everything twice as big as it should be played. Kurt Russell is our accidental hero (like Po in Kung Fu Panda) as Jack Burton. James Hong is our baddie (and terrifying), Kim Cattrall (a forever crush) is our beauty, Dennis Dun supplies the kung fu, and Victor Wong provides the wisdom. Carpenter and Alan Howarth's score drives the movie, Dean Cundey's lighting and cinematography ooze smokey neon, and Steve Johnson's special makeup effects are some of his best.

Between Po and Jack Burton, we have two accidental heroes. One is out of shape and could only dream of being a kung fu master. One is in shape and tries (and fails over and over) to be a hero. Both found themselves in the wrong place at the [fill in the blank] time, and have become cultural icons for different generations.