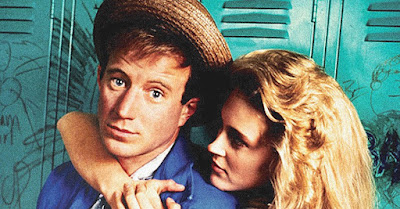 Martha Coolidge is definitely one of my guys.

As the director behind both Valley Girl and Real Genius, she should be one of your guys too. Not only does she have a killer filmography, but she also has a son named Preston after Preston Sturges—another one of my guys! And in 1988, she made a movie in which a 34-year-old Arliss Howard goes undercover as a high school student to solve a murder. His chosen undercover name? Nick Springsteen. (“Any relation?” asks every character in this movie. “Distant,” he responds.)

But don’t let me get ahead of myself! First, you should know that just as I am a sucker for the body switch movie, I am also a sucker for the “fully adult human pretends to be a teenager” movie. See also: Never Been Kissed, 21 Jump Street. So that right there is reason for me to watch. Plus, you’ve got Reginald VelJohnson in a supporting role (prime 1988, see also: Die Hard) and he’s always a joy. Next, there’s a murder mystery which I love (see also: film noir). And, to top it all off, there are references to Shakespeare and E.E. Cummings, which is just like barbecue sauce on top of my vegetarian chicken nuggets. So I guess what I’m trying to say here is that I love this movie, but some people may not have QUITE as many reasons to love it as me. Read on and decide for yourself if it sounds like you should outfit your movie collection with Plain Clothes. 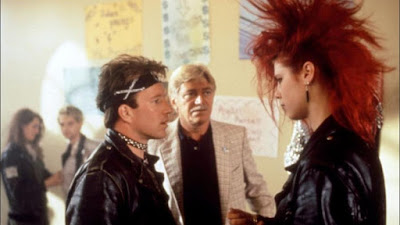 Backing up just a tad, let’s set the scene a little. The movie opens in a grimy high school hallway, with dramatic piano music underscoring the wheezes of an unseen POV character. Next, we hear the morning announcements over the school’s PA, including this little gem: “If more of you spent time on the three R’s instead of the Three Stooges, you wouldn’t need to waste time at the junior college across the street!” As a person who attended not one but two junior colleges before transferring to a 4-year school, I laughed. Moments later, the wheezing person stumbles into view – and into his classroom. He collapses face first, mutters, “Easy grader” and dies—presumably from the bloody knife that’s wedged into his back.

Now how does Arliss Howard aka Nick Springsteen get involved, you ask? Well, it turns out his brother attends this school and is a prime suspect in the case—he and Teach didn’t exactly hit it off. There’s a hilarious hostage situation set inside a children’s park called Never Never Land where cops brandish guns and knock down structures like Rapunzel’s Tower and the Three Little Pigs’ house. Little bro insists on his innocence, the big boss cop (Larry Pine) doesn’t buy it, and now obviously the only option for Nick is to find the real killer by going undercover as a high school student. (Did I mention Arliss Howard was 34 when this movie came out? Yeah.)

Now of course Seymour Cassel, his cop partner, has to pretend to be his dad enrolling him in classes. And of course there’s a cute young English teacher (Suzy Amis) Nick flirts with who might also be into him (#awkward). Oh, and George Wendt (“NORM!”) plays a creepy shop teacher/guidance counselor and Abe Vigoda plays a clueless faculty member who’s always got a handwritten sign taped to his back like “I like it doggy style” and Diane Ladd is the cranky registrar and Harry Shearer keeps popping up in unexpected places. And there’s a gorgeous popular girl (Alexandra Powers) who crushes on Nick that he only sort of rebuffs, but she’s dating the bully Kyle (Peter Dobson) that already hates Nick, so you know a beatdown is coming at some point. 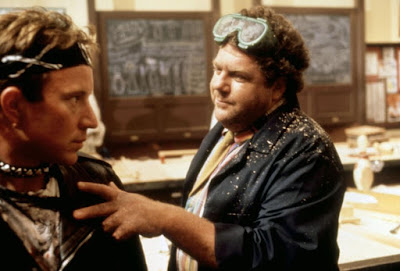 If I’m being really objective, not everything about this movie works. For one thing, it tries a little bit too hard to juggle multiple tones and ends up not being fully a comedy or fully a murder mystery. My hero Coolidge should’ve just leaned into the zany stuff and skipped the dramatic “my cellmate hung himself” interludes with the brother who’s in jail. And while at least Seymour Cassel points out to Nick that his extremely age inappropriate interactions with the hot high school girls are illegal and wrong, Nick seems to enjoy being deep into character so that’s a little blech.

But overall, I still really love this movie. It’s silly and funny and has a deep bench for a cast. There are some scenes that are just stone cold classic, like when Nick is asked to bring an example of a metaphor to class. Also, this movie is just so of its time. I admire its ambition and while it flopped at the box office and with critics, I’m happy Paramount took a chance on it. Will you be happy if you take a chance on it? Well, it’s 1988 week at F This Movie!. If not now, when?

Plain Clothes is available for rent on Amazon, iTunes, and Google Play.
Posted by Patrick Bromley at 12:00 PM