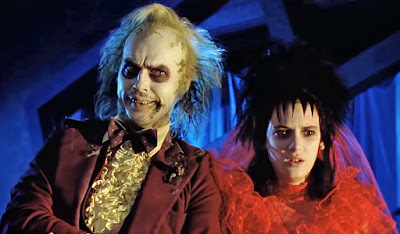 Think you’re ready for Saturday? DO YOU HAVE ZAGNUTS?

Recently on the Twitter machine, I was challenged by long-time listener/first time Jan-Challenger Jeff Kalakay to write a column about snacks and treats themed to F This Movie Fest on Saturday (#FThisMovieFEAST.) I have accepted this challenge because “Movie-Themed” is my favorite food group. SUCK IT, GRAINS.

According to my lack of research, there are several accepted approaches to creating movie-themed snacks ‘n’ treats (SNTs.) I will address all of them because I have a very inclusive SNTs philosophy of “Treats is treats.” I will provide guidance and opinion, but keep in mind that your personal SNTs (and those SNTs you share with friends and family) should reflect your own tastes and experiences. Were Oreo cookies a staple of childhood movie sleepovers? You should have STACKS of Double-Stufs. Was Fanta soda a special “movie night” treat for your family? Provide a rainbow of flavors during F This Movie Fest! SNTs are about amplifying the “fun,” not following the “rules.” Here are some things to think about for #FThisMovieFest on Saturday.

THE BASICS
You’ve got to have popcorn. This is a non-negotiable SNT. Ideally, you’ll pop it yourself from kernels, so your home is permeated by the sexy, sexy scent of warm oil and melted butter. Have plenty, and why not order yourself some of these?

Movie candy is another sure-fire crowd pleaser. We’re talking Dots, Junior Mints, Skittles, Good N Plenty, Goobers, and Raisinets. Stock up at the CVS when it’s on sale for a dollar a box—it’s okay if it goes a little stale by FTM Fest; it will taste just like it did at that cheap-ass second-run movie theater you frequented with your friends when you were fifteen. F This Movie! Superfan Pro Tip— Try out the PJB Special: a bowl of plain M&Ms next to a bowl of mini-twist pretzels. The standard ratio is 2:1 M&M to pretzel, but you will need to play around and find your own bliss. 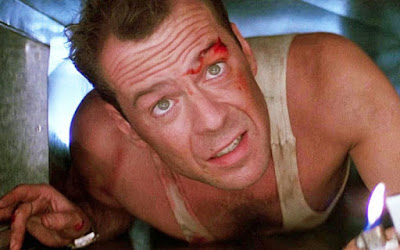 Assuming the new 6-movie standard of FTM Fest, you’ll want to schedule a pizza delivery between the 4th and 5th movies. Frozen pizza is also fine! Not only will this give you a chance to recharge your batteries, you’ll be able to tweet the traditional #ProofofPizza pics along with the rest of us.

If you want to get fancy (yes, please!) follow FTM Fest fan and cool guy @BiddleBrian (aka Friendly Gayborhood Daddyman) and subscribe to his Mutant Café channel on the YouTube Machine. This Friday he’ll cover two of the basics—with an appropriate Chicago flair—with an episode featuring Chicago Mix Popcorn Chicken Bites and Pepperoni and Cheese Pizza Reels. Both look AMAZING.

Before the pandemic (more like panDUMBic, amiright?), when we locals could gather in the FTMFest HQ Movie Basement Dungeon, our “basics” included my homemade salsa (LA Doug’s favorite) and guacamole (Erika’s favorite.) I don’t have so much a “recipe” as a “method” – and I’ll tweet it out pre-FTM Fest on Saturday, so be sure to follow the hashtag #FThisMovieFest.

THE YEAR: 1988
Theming your SNTs to the year of each movie’s release adds a historical perspective so important to today’s remote schooling environment. FTM Fest makes it easy by focusing on a single year. If you were alive in 1988 (are any of us really, truly alive?) you will undoubtedly have your own favorites from that time. Many of them no longer exist, due either to changing food fashions or class-action lawsuits. Anything served on a neon-colored tray or while wearing a skinny red leather tie will work for 1988.

—RANCH DRESSING: From Cool Ranch Doritos to Hidden Valley Ranch Spinach Dip in a Bread Bowl, nothing says 1988 like the buttermilk tang of ranch dressing. FTM’s own Patrick Bromley makes an excellent ranch dip for veggies—it’s great to have something healthy to snack on too!

—LUNCHABLES: Still available, but in slightly healthier versions than when they were first launched in 1988. Honestly, I think these are perfect for COVID-friendly movie watching: no shared plates and easy to eat in the dark.

—DUNKAROOS: Snackhistory.com confirms that these were first made available in 1988, when kids around the world decided to end the soft fascism of pre-frosted cookies. These were not only a lunchbox staple that actually tasted good, they are BACK at 7-11, at least here in suburban Chicago.

THE MOVIES
There are two schools of thought when it comes to SNTs themed to specific movies. You can go with treats FROM the movies, or treats INSPIRED BY the movies. I’m a lover, not a fighter, so I encourage both. This year’s FTM Fest lineup is killer, so let’s go movie-by-movie for some inspiration.

In an ideal SNT situation, one of this movie’s best-loved scenes features a delicious food: shrimp cocktail. Serve the shrimp in the classic fashion, hooked naked over the edge of a small, footed bowl, with crushed ice and cocktail sauce. Throw some diced mango or jerk seasoning into the cocktail sauce for a calypso flair. A “beautiful bunch of ripe banana” would make the perfect centerpiece.

I LOVE these “Bride of Betelgeuse” Severed Finger Cookies over at Pretty Baking Machine.

This movie features two little brownies played by Kevin Pollack and Rick Overton, so Two Little Brownies it is! My favorite recipe for easy homemade brownies is Baker’s One Bowl Brownies, but store-bought brownies are, in FTM parlance, “fine.” Little Debbie brand brownies already come in individually-wrapped packs of two tiny, connected brownies, if you’re feeling lazy. Grab the picture above and print out your own labels!

It may be true that you should never give a baby black root, but root beer is a tasty stand-in. A Willow Wiki I visited claims that the substance used in the movie is actually vanilla fruit, so in honor of FTM fan Charlie B., I suggest Black Root Floats made with Sprecher Root Beer and a good vanilla ice cream. Yum. 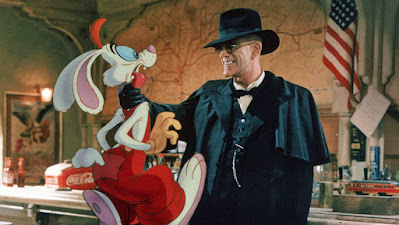 You could just cook and serve a rabbit, but then your friends would hate you and I would hate you and you’d need to chop all those shallots, so stick with what’s really central to this movie: DIP. It’s supposed to dissolve ’toons on contact, so the spicier, the better. A nice green salsa would be perfect, but any dip’ll do.

Roger is heartbroken when he discovers that his wife Jessica has been “playing pattycake” with studio head R.K. Maroon. But “patty cake” is another term for “cupcake”, and cupcakes are always a welcome SNT! I suggest Carrot Cake Cupcakes with WFRR-themed toppers or decorations: red sparkle sugar for the “Jessica,” blue with yellow polka dots for the “Roger,” and an entire flask of cheap whiskey for the “Eddie.” 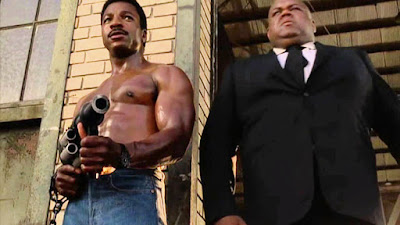 I’ve never seen this movie, so I’m really looking forward to it—but that means I don’t know Jericho Jackson’s favorite food, or what Sydney Ash snacks on (yes I do: it’s heroin.) However, anyone who knows anything about this movie knows that someone’s balls end up in a jar, so for this movie-themed SNT, I’m suggesting Ball Jar Balls. This is two meatballs served in a small Ball jar. For the meatballs I suggest homemade because IMO frozen meatballs… how do I put this?... suck balls. Use good, lean ground beef; unseasoned bread crumbs; a small splash of milk; salt, pepper, garlic, and a dash of cumin, plus additional seasonings of your choice. Just put them under the broiler, turning once. For the sauce, I recommend marinara instead of formaldehyde but, you know—you do you. 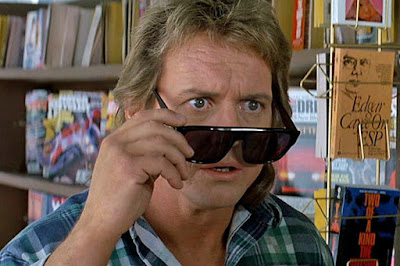 You’ve come here to chew bubblegum and kick ass, so Bubblegum is a no-brainer for this one.

Next, if you’re not already following the Homicidal Homemaker on Twitter, get on that—she’s awesome. Here’s a link to her absolutely gorgeous They Live Sugar Cookies With Bubblegum Icing.

This column is about SNTs, not party decoration; but in the spirit of They Live I also recommend adorning your Movie Fort with signs bearing slogans like OBEY, CONFORM, and NO INDEPENDENT THOUGHT. After Saturday, these can be repurposed as décor for your children’s bedrooms! (#goodparenting)

Die Hard
“Come out to the coast, we’ll get together, have a few laughs…” You may not know what a TV dinner feels like, but you and your party guests can find out what a TV dinner TASTES LIKE if you grab a few Swanson’s to serve in honor of Die Hard. I suggest the Hungry-Man Roasted Turkey Breast Frozen Dinner, since that is likely what John McClane would be eating on Christmas night in his sad NYC bachelor apartment if he hadn’t decided to visit Holly and the kids.

If you’re an Al Powell fan—and who isn’t?— put out a huge pile of Twinkies!

Finally, cap off this year’s final movie with the Die Hard—a strong but decent drink that packs a potent punch and has an underlying sweetness that is sure to make it a holiday classic. I specially commissioned this from FTM’s own JB, who recommends that you also float a little 151 rum on top so you can set it on fire, just like the roof of the Nakatomi building. Here’s his recipe—serves TWO, boozehounds: 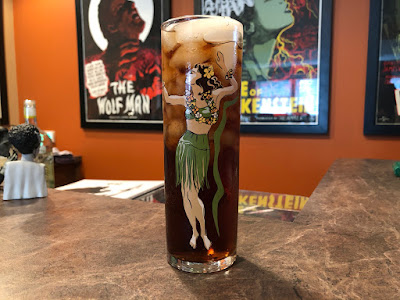 Shake well; divide over two glassed filled with cracked ice. Serve with lemon twist because life is both sweet and sour. Drink barefoot while making fists with your toes.