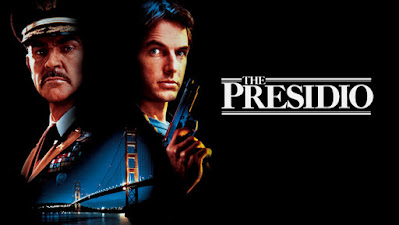 Wherein Sean Connery beats a guy up using only his thumb.

San Francisco has long been one of the most photogenic cities in the world. Bullitt, 48 Hrs., Dirty Harry, Mrs. Doubtfire, The Maltese Falcon, The Rock, Invasion of the Body Snatchers, and countless others have showcased the picturesque city and its abundance of hills. Those hills feature prominently in numerous police and crime movies shot there, namely those mentioned previously. And in my opinion, there is no better city in which to film a car chase. Or a foot chase, for that matter. The Presidio (1988), from director Peter Hyams, is just as much a movie starring San Francisco as it does its fabulous cast of name brand actors.

As with many movies filmed in San Francisco, The Presidio opens with several beautiful shots of what people have come to associate with the city: the bay, streetcars, the Golden Gate Bridge, Coit Tower, and finally landing on The Presidio, a military base that was converted to a national park in 1994. The movie follows a police investigation into the murder of a military policewoman (MP) who was shot on the base. Mark Harmon plays Jay Austin, a detective for SFPD and former MP. He has to join forces with his former commanding officer, Lt. Col. Alan Caldwell, played by Sean Connery. Sitting between the two hard headed men is Caldwell's daughter, Donna, played by Meg Ryan, who Austin pursues as a romantic interest. 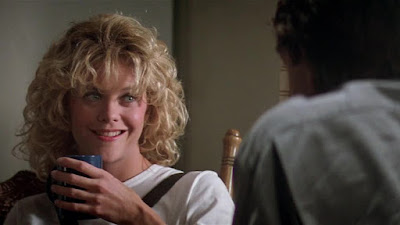 At the risk of angering hordes of middle-aged people, I'd like to say something about Mr. Harmon. While I find him to be a fine actor and an extremely handsome man, he has the charisma of a soggy noodle. Harmon usually (and successfully plays) a cool, brooding guy, and he's no exception here with his letterman's jacket and snakeskin boots. It seems like studio executives tried to make him into a Tom Cruise-type, but the poor guy just has no personality. Again, I love Mark Harmon and think he's a terrific actor. Not for a minute, though, do I buy a hot and wild 27-year-old Meg Ryan falling for him. Yes he's handsome and he plays the stone-faced cool guy well, but being a former Meg Ryan-obsessive, it ain't happening. That isn't to say, though, that Meg isn't stunningly gorgeous here (like Harmon). And when she starts to unzip his pants while they're making out on the car outside his apartment I had to fan myself a little. It's hot, don't get me wrong. I just don't buy it.

On the other hand, the brick that is Det. Jay Austin is quite complimentary to the effulgence of Lt. Col. Alan Caldwell. For one, we're talking about the original James Bond. Connery will forever be associated with the words “cool” and “swagger.” He could read nutrition facts in the natural foods aisle at the grocery story and still exude icy-hot charisma. Therein lies the unique formula Peter Hyams achieved that hasn't quite been achieved to this day. In a typical buddy cop movie, you have two completely different but boisterous personalities. In The Presidio, though, you have one giant personality and one non personality. (I love you MH.)

This is an oft-forgotten '80s cop movie, and that's a shame. Along with the three previously mentioned superstars, you also have Jack Warden, who is always a welcome face and voice. And, of course, the city, to which I will now return. Many movies feature car chases through San Francisco's famous streets and steep hills in broad daylight. What I love about The Presidio is that its opening sequence features a riveting car chase through the overgrown and canopied side roads of the Presidio before emptying out into the hilly wilds of the urban landscape at night. It's one of the great San Fran car chases that is almost never mentioned. The other brilliant showcase for the city is an impressive foot chase through Chinatown. Austin is running after a suspect through alleyways, crowded sidewalks, the ubiquitous kitchen/restaurant, and finally crashing through a window and spilling into the street. The most impressive feat, though, is a shot of Harmon running over a line of cars before diving and bellyflopping (!) onto the roof of one (you can see it in the trailer). He may not have personality, but his stunt work is impressive.

The film's thrilling conclusion takes us to a water bottling plant that is reminiscent of the final battle in Turner & Hooch (although The Presidio came out a full year before). You may be thinking, “Oooh. A water bottling plant. How exciting. Yawn.” Let me say this: you won't find any giant, fiery explosions at the end of this movie, but you will find some fun, splashy explosions. And you'll see one of the cheesiest moments as Austin slides down a wet conveyor belt on his belly, shooting at the bad guy (also seen in the trailer).

I know it seems like I've ragged on this movie and its star a lot, but I really do love it and him. The Presidio is an underrated and underseen '80s cop movie. Everyone knows the poster but hasn't watched the actual movie. Take the time to celebrate 1988 and Mark Harmon's (non) charisma this week.
Posted by Patrick Bromley at 12:00 PM