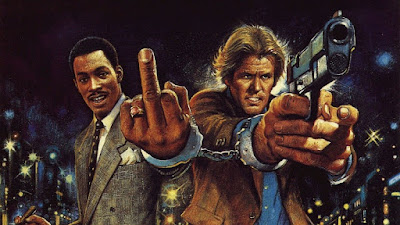 More than 30 years after it was first released in theaters, Walter Hill's 48 Hrs. still packs such a punch.

A tough, foul-mouthed and violent thriller (it is, after all, a Walter Hill movie), 48 Hrs. may not have been the first "buddy cop" movie ever made, but it just may be the most influential. Every entry in the genre afterwards -- and, to be clear, there are many, from Running Scared to Lethal Weapon to Cop Out to last summer's Central Intelligence -- has just followed suit. I say this not to diminish the buddy cop genre, for which I have a frequently professed love. I say it to point out that a movie like 48 Hrs., which may seem formulaic in 2017, only seems that way because it's the one that created the formula. 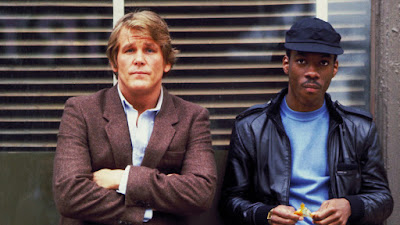 Nick Nolte plays Jack Cates, a San Francisco cop on the trail of escaped criminal Albert Ganz (James Remar) and his associate Billy Bear (Sonny Landham). When the bad guys kill Jack's partners and steal his gun, his only option is to free Reggie Hammond (Eddie Murphy), a thief who ran as part of Ganz and Billy's crew, from prison for 48 hours to help find them as they search for the half a million dollars hidden in Reggie's car before he went away. These two are going to solve the case...if they don't kill each other first!

There were buddy cop films that predate 48 Hrs. Movies like Freebie and the Bean or Peter Hyams excellent Bustin' or Hickey and Boggs (private detectives, I know, but it still fits within the genre -- and it's written by Walter Hill!) were creating the template for the genre in the 1970s, but the difference between those movies and 48 Hrs. is that the '70s iterations presented duos who were really partners on the force, working together to solve a case. The invention of 48 Hrs. is that it puts the buddy cops at odds with one another, forcing them to cooperate despite total differences in their personalities and philosophies. This would be the template for the majority of buddy cop movies going forward, which seem to subscribe to the notion that oil and water makes for a) greater comic potential (people arguing = big laughs) and b) built in drama, because you can take two characters who don't get along and then by the end they get along and that's how you show growth.

But Hill isn't chasing these sorts of cheap dramatic shortcuts; he would rather give each of his characters a code by which they live, then allow them to learn and respect one another's personal code. One of the things I really like about 48 Hrs., is that Reggie and Jack don't necessarily get along by the end. They don't become best buds, with Jack invited over for Reggie's family dinners or vice versa. (I know, I know, neither one really has a family, and while this may sound like I was throwing shade at Lethal Weapon, trust when I say that I love Lethal Weapon.) What they develop instead is a sort of mutual respect, and that's as much as Hill will allow them without betraying the fundamental nature of either man. 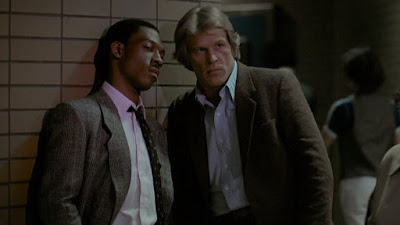 The mutual respect that develops between Nolte and Murphy is a big part of what elevates this movie from others like it, because both the actors and Hill earn it. At the end of the film, when Jack tells Reggie his money will be waiting for him when he gets out, it's because he has developed an admiration for how the convict has handled himself and because he sees that despite his bluster, despite his hustle, Reggie does follow a code. Code is everything to a director like Hill, whose films generally adhere to the tropes and archetypes of the American Western. On my most recent viewing of 48 Hrs., I noticed that, in true Walter Hill fashion, it is a film in which the characters are defined primarily by action. That the screenplay by Hill, Roger Spottiswoode, Larry Gross, Jeb Stuart, and Steven E. de Souza is so dependent on dialogue is most likely a result of Murphy's participation, as it doesn't make sense to cast a brilliant, fast-talking comedian unless you're going to let him play a brilliant, fast-talking character. But Hill's scripts are famous for their minimalism, whether it's his famous pass on Alien or his work on The Driver. Though 48 Hrs. is far from minimalist, it does value deeds over words.

Over the years, 48 Hrs. has garnered a reputation for being an "action comedy." And it is funny at times, with a then-21-year old Eddie Murphy (fresh off a stint as a cast member on Saturday Night Live) becoming a superstar overnight thanks to his electric performance as Reggie Hammond. But the film is more of a hard-boiled actioner with a character who happens to be very funny. It's not Rush Hour, in which almost every character and scene is somehow played for laughs (and I say that as someone who likes Rush Hour and Rush Hour 2). It's not even a movie I would classify as a comedy, despite some funny dialogue and the presence of Murphy in a lead role. In fact, 48 Hrs. still feels just as mean and nasty as it did in 1982 -- possibly even more so, thanks to about three decades of political correctness that followed it. This is a movie with race very much on its mind, forever bubbling just under the surface and threatening to boil over at any minute. The scene in which it finally does -- Eddie Murphy taking total control of a redneck bar and putting every patron in his place -- has been correctly identified by Roger Ebert as the scene that made Murphy a star overnight. 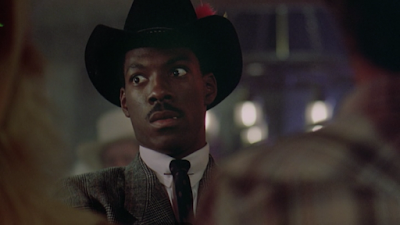 Like a lot of early Murphy movies, watching 48 Hrs. today makes me ever so nostalgic for the comedian's earliest films, in which he was quick-talking and edgy and totally magnetic. He felt dangerous and unpredictable, but we were always on his side. It's the Murphy that's still young and hungry, before his career would give way to self-indulgent vanity projects (Harlem Nights, Boomerang) and, eventually, hollow, pandering "family" comedies (just about anything in the post-Nutty Professor catalogue). This and Trading Places remain my favorite films in Murphy's filmography specifically because there is such a rawness to his performances. While I'm still not the world's biggest fan of Nick Nolte (he's great, he's just not an actor whose every movie I seek out by virtue of his involvement), it's hard to utter an unkind word about his performance in 48 Hrs.; he's less an actor and more a natural resource. When you cast Nick Nolte as a burned-out, hard-drinking cop, you don't need to waste any time on character background or exposition. He's cinematic shorthand.

48 Hrs. was also something of a commercial breakthrough for Walter Hill, one of the greatest genre filmmakers to ever have lived. Though he had already experienced mainstream success as the writer of movies like The Getaway and Alien, which he also produced (and for which he receives no on-screen credit as a writer), Hill was still something of a cult director at this point in his career. His early films are beloved now -- titles like Hard Times, The Driver, and Southern Comfort -- but it was really only The Warriors that became any sort of box office hit. 48 Hrs. changed everything for Walter Hill. In the words of film critic Drew McWeeny, it bought him the rest of the 1980s and paved the way for both a dream project, 1984's Streets of Fire, and an attempt at a much more commercial hit, Brewster's Millions, in 1985. The former is my favorite Walter Hill movie, while the latter is among my least favorite (last year's The Assignment may have claimed the top spot). The rest of the decade found Hill getting back to basics, using what he learned on 48 Hrs. (a notoriously troubled production that began its life as a Clint Eastwood/Richard Pryor pairing) to make Walter Hill-style movies with a slicker studio gloss, resulting in his strongest period as a filmmaker: Crossroads, Extreme Prejudice, Red Heat, and Johnny Handsome. It wasn't until Hill tried to chase commercial success with Another 48 Hrs. in 1990 that his career started to veer off course a bit. Then again, Another 48 Hrs. is the highest-grossing movie he ever made, so what the fuck do I know? 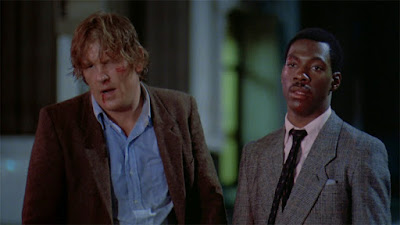 There are '80s movies that have been seen so many times and have become such a part of our popular culture that they are remembered as "classics" even though they're not especially good, and then there are those same movies that are so much better than their reputation as a cable staple suggests. 48 Hrs. is one of those movies. We remember it as a buddy cop movie and as the movie that made Eddie Murphy a household name, but it's so much more than that. It's a badass action movie, a cool San Francisco movie, a hard-boiled cop drama, and a scorching examination of race at a time when most studio movies were unwilling to touch the subject in anything outside the confines of an "issues" film. It remains one of the best examples of a Walter Hill movie that still functions as a mainstream studio movie, the way even a Brian De Palma or a Jonathan Demme were sometimes able to break through without compromising their voices. It helped codify one of my favorite subgenres. It's a film to which my movie love owes a great debt. It's a stone cold classic.