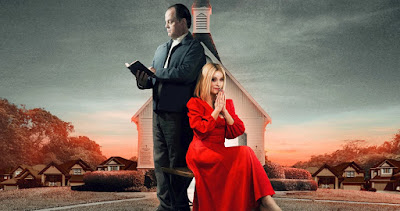 Travis Stevens and Barbara Crampton team up for one of the best horror movies of 2021.

Jakob's Wife is a perfect title for the sophomore feature from director/co-writer Travis Stevens. It does not provide an identity for its main character, Anne, played by the great Barbara Crampton, but instead defines her solely by her relationship to her longtime husband, Pastor Jakob Fedder (Larry Fessenden). Jakob calls the shots. He finishes her sentences, talking when he should be listening. She cooks and cleans and plays the "dutiful" wife, never letting on that maybe, just maybe, she longs for something more. Then, one day, while reuniting with a former flame (Robert Rusler), she is attacked by something...inhuman. She develops an allergy to sunlight and a taste for blood. All of her appetites increase, really, as does her ability to assert herself. Things are going to change for Anne.

I'm going to try to talk about Jakob's Wife without gushing too much, so let me just start by saying I love it. This is a horror comedy that says so many things about so many things about relationships, marriage, and gender politics, but it's also a blood-soaked blast of fun. If Stevens' first movie, the very good Girl on the Third Floor, could be described as "goopey," this one can best be called "fucking drenched." No blood spray is too large or too strong for Stevens, who can practically be heard cackling off camera when staging the film's memorable gore gags. It's splatstick of the highest order, mining laughs from insane bloodshed. That Stevens is pull it off without losing sight of the movie's heart is no small feat. 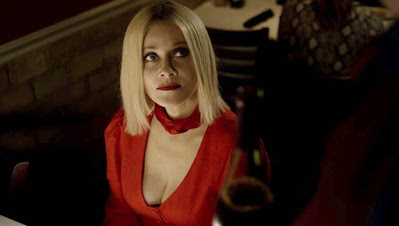 The movie's heart, to no one's surprise, is Barbara Crampton. Since returning to the genre with You're Next, Crampton has become the Queen of Indie Horror -- not just one of its brightest stars, but also an ambassador for the genre, a mentor, an author, an icon. Stevens and co-writers Kathy Charles and Mark Steensland give her arguably the best role she's had since the '80s, and Crampton characteristically crushes it. She gets to be so many things: funny, scary, sympathetic, monstrous, sexy, savage. She plays the humanity of the character without ever losing sight of the fact that it's all rather funny even while there are real lives and real emotions at stake (pun intended). Jakob's Wife is a movie about the things we gain and the things we give up to be in a relationship, and it's Crampton who sells that better than anyone, whether it's her eyes quietly dying when her husband once again talks over her or the way she seems to truly consider a late-movie offer, about which I won't say more. Her work in the movie is phenomenal. 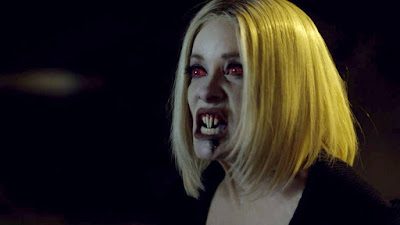 While I'd love to say that Crampton is the whole show, the truth is that she's ably supported by everyone involved, none more so than Fessenden as her husband who starts out as a bit of a shit before revealing himself to at least be more complicated than that. His relationship with Crampton, flawed and seemingly broken as it may be, also contains genuine warmth and chemistry -- these are people who have been together a long time and aren't willing to just give that up, even if that means hiding a body or two. The whole supporting cast of Jakob's Wife is excellent, with performances that are always calibrated to the movie and the moment they're in. It's not always easy with a tone this tricky, but it's a tone deftly handled by everyone involved, none more so than Travis Stevens at the helm. Already a producer whose participation was enough to get me excited about a movie, Stevens has now become one of the most interesting and exciting contemporary horror directors with just two features under his belt.

Like his first film, Jakob's Wife looks at gender politics through a cracked lens, one which reveals the toxicity of a certain kind of man and the ways it can poison those around them. The difference this time around is that this is not Jakob's story. It's the story of Jakob's wife. She has a name, motherfucker, and it's Anne. Ignore it at your own peril.