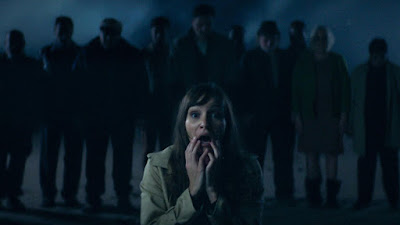 I've been a fan of Mickey Keating for several years now. At just 31 years old and with seven features already under his belt, he's something of a wunderkind -- an extremely prolific and talented young filmmaker who has struggled in the past to find his own original voice. I'm not complaining. I've enjoyed his special brand of influence films, from the '70s grindhouse exploitation of Carnage Park to the '60s Polanski homage Darling. I want to say that his latest film, Offseason, his seventh film and the first since Psychopaths in 2017, is a little bit of Dead & Buried, a little bit of Messiah of Evil, a good deal of Fulci, and a hell of a lot of Lovecraft, but I have to stop watching his movies this way. I have to stop trying to spot the influences and simply accept that what I'm watching is more than a pastiche. It's a Mickey Keating movie.

Jocelin Donahue plays Marie Aldrich, a woman who must travel to a remote island town after receiving a letter that the grave site of her actress mother (Melora Walters in flashbacks...mostly) has been defaced. She brings her friend? partner? George (Joe Swanberg) along with her to the tourist town, winding up cut off from the rest of the world by a bridge and bad weather. Or is there more to it than that? Is there something on the island that wants Marie to stay? 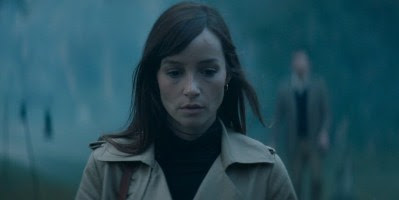 It's a fairly simple premise, but like a lot of Mickey Keating movies, Offseason is less about the story being told than it is about the execution. This one is all about mood and atmosphere and creeping dread, all areas in which it succeeds. Keating is less interested in what might pop out at his characters than he is in making us wait for it to pop out, but he's also smart enough to make it worthwhile when it finally happens. It's the kind of horror that's often written off as "slow burn," which is to say that it requires patience and an appreciation for tone over plot. It's not going to be for everyone. Those of us who are able to dial into its wavelength and who can dig a good supernatural seaside tale are going to be rewarded.

After the bold, unquantifiable originality of Psychopaths, Offseason feels like a a step backwards in terms of Keating defining his own voice, but he continues to take big steps forward in technique and in confidence. This is a well-made, patient, self-assured film that knows exactly what it wants to accomplish and does so accordingly. It's full of odd little touches, too, that can only be ascribed to Keating's personality, making it feel very much like a Mickey Keating movie even when it's paying tribute to similar horror that's come before. I'm hoping that the film marks a resurgence in Keating's output and that he gets back to making movies more regularly than he has in the last few years. I've missed him. Movies like Offseason are the reason why.