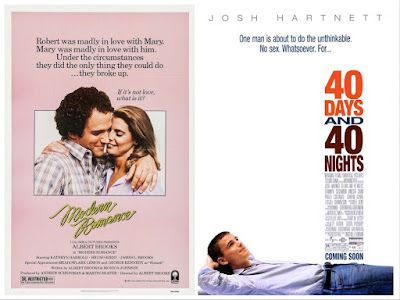 “I just broke up with somebody and I’m trying to start a new life, and I think that running should be a major part of it.” – Robert Cole

I'll be honest right at the top: I wake up every day thanking whatever all-powerful being brought my wife into my life so I don't have to suffer in the dating pool any more. (No offense to those of you still swimming.) While watching romantic comedies about single adults navigating their normal, daily lives while also pursuing romance is enjoyable for the most part, these types of movies remind me what kind of Hell life would be if it were my life. And this is a major reason we love watching fictional movies. (*nervous laughter*) 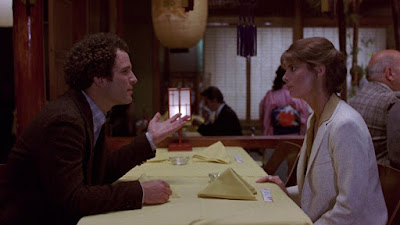 On this episode of Two for One we get to watch grown adults suffer the trials and tribulations of pursuing romantic relationships. One is a timeless classic, and one is a timeless classic to me. We kick things off with the Albert Brooks-written,-directed, -starring Modern Romance. The film opens with Brooks' Robert Cole meeting his girlfriend, Mary (Kathryn Harrold), for dinner. They've had an on-again-off-again relationship for several years, and he's breaking up with her... again. “You've heard of a no win situation,” he explains to her. She responds in earnest, “No.” Robert says, “No? Really no? Vietnam? This?” Afterwards, Robert tries to live his life as normally as he can. He's a film editor with his partner Jay (Bruno Kirby), working on the latest sci-fi joint directed by James L. Brooks and starring George Kennedy. Jay sees Robert is stressed out and give him a couple Quaaludes, which Robert takes, flies high, and calls another woman for a date. The next day Robert decides to change things up by starting to take vitamins (“I just broke up with somebody and I'm going to need some new vitamins.”) and running (“One two three, I don't even miss her, two three.”). For all the changes he's making in his life, Robert still obsesses over Mary. It's Brooks' typical, neurotic-Jew humor with an excellent cameo from his brother (Bob Einstein, aka Super Dave Osborn), and a pee-your-pants-laughing scene of his date with a new woman. Plus it's a film about filmmaking!

We follow the timeless classic of Modern Romance up with my timeless classic, 40 Days and 40 Nights. I recognize I have a lot of nostalgia attached to this movie, but there's still plenty to laugh at. 40 Days is purely a product of the early noughties that will forever live there. Directed by Michael Lehmann (Hudson Hawk), it stars Josh Hartnett as Matt, a twenty-something playboy who works in digital advertising during the day and apparently has lots of sex with different women at night. He's discovered recently that his ex-girlfriend is getting married, so Matt decides to get his life back on track by taking a vow of celibacy (because he apparently has lots of sex with different women at night), including no self gratification. His co-workers and roommate create a betting pool on the internet to see how long Matt will last. Needless to say, these guys are disgusting pigs. Funny, but disgusting pigs. (“It goes against nature. The male was biologically designed to spread his seed, Matt. You're gonna piss off the seeds, man! It goes against science! You wanna be the guy who goes against science?”) A week or two into his experiment, Matt meets Erica (Shannyn Sossamon), who also works for an internet company (after all, this is the dot-com bubble) that seeks out porn sites children could mistakenly go to (???). Erica ends up discovering Matt's little celibacy secret, he gives her an orgasm by rubbing orchids on her belly, and they eventually have sex. It's dumb. It's juvenile. It's good, silly fun. 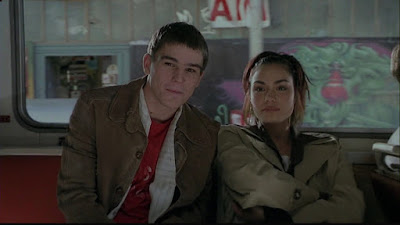 These are two romantic comedies that, yes, I find hysterically funny. But like so many romantic comedies (read: any movie) these movies show how wildly immature and jerky men can be and are. Everybody has their flaws. Men, women, and genderqueer people are full of things that would drive anyone else bonkers. The two biggest flaws of Mary and Erica from these two movies? They stuck with Robert and Matt. These men are children. Robert is a 34-year-old man who drives a decent car, lives in the Hollywood hills, and has a nice job in the film industry, but can't commit to a stable relationship with a women whom he claims to love. Matt, at 24 years old, is a little more understandable being younger, but is still a grown man obsessed with his penis. (“This morning at the coffee shop they were unofficially sponsoring Hot Women Wearing No Bras Day.”)

In no way am I trying to take away the joy received from watching these two movies. Hell, I still love them and watch each once a year. But do I get more joy watching them now after being with my wife for 15 years than I did as a single twenty-something in the early noughties? I'd like to think so. I can look at guys like Robert and Matt and laugh my ass off at their immature idiocy while also thanking my lucky stars every single day I'll never be in their position again. Good luck, single-but-dating people!
Posted by Patrick Bromley at 5:00 AM