Yes, they play the song.

It’s been a good long while since I popped a Mortal Kombat cartridge into my Sega Genesis, but for a stretch there in the early ‘90s, it probably happened every day. Unless you were around — and adolescent — at the time, it’s hard to appreciate just how seminal that original video game series was. Friends and I would smash controller buttons for hours on end in hopes of finally nailing that Flawless Victory or unlocking the hidden Fatality that our elementary school rivals swore they’d seen with their own eyes. For me, though, it was never about the violence; if you just wanted to hit things, you could always play a Street Fighter game. No, I was all about the mythology of Mortal Kombat, the centuries-old struggle between the forces of light and darkness that would eventually decide the fate of the universe. Heroes were good. Villains were bad. One guy could rip out another guy’s spine. What’s not to like? 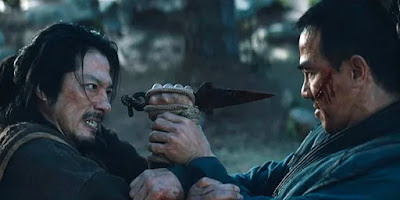 That mythology was deepened in subsequent games, comic books, TV and web series, and especially in Paul W. S. Anderson’s original 1995 film adaptation. Here’s the basic gist: Our Earthrealm is just one of many governed by a group of Elder Gods. To keep the various realms from consuming each other, those Gods decreed that each generation may hold a tournament of champions to determine the balance of power. The sinister Outworld has defeated Earthrealm in nine out of ten consecutive Mortal Kombat tournaments. If they win a tenth, Outworld’s emperor and his armies are free to invade and pillage our world for the foreseeable — presumably apocalyptic — future. To prevent this, the noble Lord Raiden assembles a group of fighters from around the globe in the vain hope that one of them will be able to stave off annihilation for another generation. Don’t look at that too closely; it doesn’t make a ton of sense.

Hell, Simon McQuoid’s new film adaptation entirely dispenses with the actual tournament. After a brief opening scene establishing an ancient rivalry, this story begins with an MMA fighter called Cole Young (Lewis Tan). Long past his prime and struggling to support his family, Cole is approached by US Agents Sonya Blade (Jessica McNamee) and Jackson Briggs (Mehcad Brooks), one of whom shares the mysterious dragon-shaped brand Cole has had since birth. With Blade’s research pointing to the aforementioned apocalypse, the three enlist the help of cocky gangster Kano (Josh Lawson) — who also sports the dragon brand — in finding Raiden’s (Tadanobu Asano) temple. There, warriors Liu Kang (Ludi Lin) and Kung Lao (Max Huang) train our heroes to access their supernatural “arcana.” Meanwhile, Outworld sorcerer Shang Tsung (Chin Han) and his lieutenant (Joe Taslim as Sub-Zero) plot to assassinate Earth’s fighters before the tournament begins. 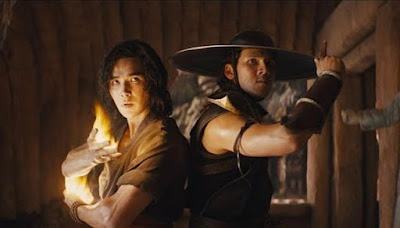 Far from the bloodless, New Line Cinema camp of Anderson’s adaptation, this Mortal Kombat thrives on brutality. Each set piece is punctuated by intense violence, adult language, and an altogether unnecessary level of gore. This ain't your daddy’s — read: my — Mortal Kombat, that’s for sure. Nor is it a showcase for elaborate The Raid-style fight choreography. There are a few acrobatic moments — especially Hanzo Hashashi’s (Hiroyuki Sanada) stylish blade-on-a-chain moves — but the film’s editing is far too jagged to establish any rhythm or continuity in the contests. Most of the characters are dispatched as quickly as they are introduced, especially the bat-winged vampire Nitara (Mel Jarnson), who is sawed in half in her tenth second of screentime. Still, fans of the modern Mortal Kombat games will likely appreciate the bone-crunching savagery and revamped designs of classic characters.

Far less impressive is the plotting, which gets lost in the muck of meaningless worldbuilding and asks our protagonists to forget critical bits of information whenever it needs to compound the drama. Borrowing from Enter the Dragon, Anderson’s original film established a neat framework for the action, gradually scaling the intensity and developing characters as the tournament went on. This version centers our story at Raiden’s temple before suddenly bouncing fighters around the galaxy to create the illusion of a climax. One scene finds Cole returning home — He forgot that he separated from his family in order to protect them from Outworlders who are drawn to his dragon brand — only to fight the four-armed Prince Goro (voiced by Angus Sampson) and immediately return to the temple. The character beat makes sense — Cole needed to protect his family in order to activate his aracana — but wasn’t he doing that to begin with? Doesn't matter. 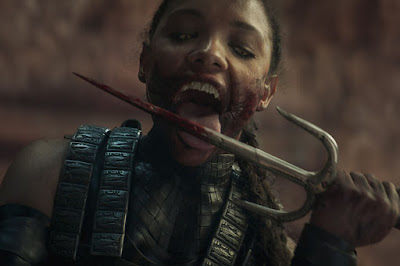 The action should take precedence over the plot, of course, and no version of this story is without its flaws. But as Shang Tsung is never properly dealt with — He taunts our heroes behind a force field for most of the film before fucking off back to Outworld — this Mortal Kombat seems to exist only to set up a franchise. Only one character is given a complete arc, while Raiden tasks the others with assembling a new crew of champions for the next tournament. And, honestly, most of us will be fine with that. That’s our blockbuster landscape now, right? Just as Anderson’s film reflected the ‘90s cultural power of The Movie, this Mortal Kombat reflects the current cultural power of The Shared Universe. The kids who grew up with the 2011 reboot Mortal Kombat game are entering that same adolescence I remember so fondly, so why shouldn’t they get their own big-screen adventure? Let the kids rip out the spines of their enemies, dammit!
Posted by Patrick Bromley at 5:00 AM